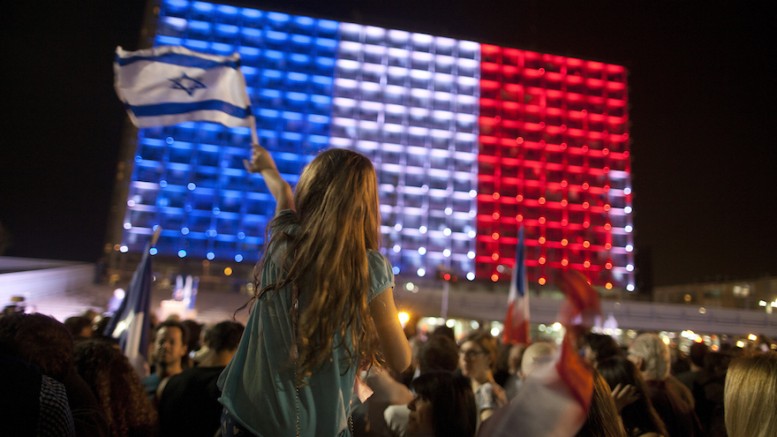 Thousands of people gathered in Tel Aviv’s Rabin Square to show solidarity with the victims of the Paris attacks, Nov. 14, 2015. (Lior Mizrahi/Getty Images)

In a statement issued on November 14 about the Paris terrorism of the previous day, Israeli Prime Minister Benjamin Netanyahu said that he had “instructed Israel’s security and intelligence forces to assist their French counterparts and their counterparts from other European countries in any way possible.”

Israel’s minister of intelligence, Yisrael Katz, later clarified Netanyahu’s statement, telling reporters that intelligence cooperation among Israel, France and other European countries is “ongoing,” but that “intelligence material relevant to what happened has been relayed, and we will also deepen the cooperation.”

Katz added that the information would help the French and other countries deal with the aftermath of the attack and future attacks, Reuters reported.

Israel’s Army Radio reported on November 15 that some intelligence may have come from Israel’s surveillance of Syria and Iraq, two strongholds of the Islamic State terrorist group that claimed responsibility for the Paris attacks.

“In Israel, as in France, terrorism is terrorism, and standing behind it is radical Islam and its desire to destroy its victims,” Netanyahu said on November 15 at the start of the weekly Cabinet meeting.

The prime minister was referencing the West Bank attack on November 13 that killed a father and son, and injured five other family members, as they drove to the Shabbat pre-wedding celebration of the man’s daughter, and the attacks in Paris several hours later that left 129 people dead and injured hundreds.

“The time has come for the world to wake up and unite in order to defeat terrorism. The time has come for countries to condemn terrorism against us to the same degree that they condemn terrorism everywhere else in the world,” Netanyahu said, adding that it would be “proper” for Palestinian Authority Prime Minister Mahmoud Abbas to condemn the attack in Israel in the same way he condemned the attack in France.

Meanwhile, thousands of Israelis rallied in solidarity with France following the terror attacks in Paris.

French Ambassador to Israel Patrick Maisonnave presided over the rally, which took place November 14 in Tel Aviv’s Rabin Square. Maisonnave said France has been targeted in particular for its part in the fight against terrorism and ISIS, and thanked Israel for its support.

“It is a vivid testimony to that fact that France is not alone in this struggle,” he said. “I thank the people and the authorities of this country, Israel, for their flawless support. Democracies do not seek vengance and revenge. They seek justice. The fight against radical Islam is our common struggle.”

“Tonight we are all French,” he said. “We stand shoulder to shoulder in the war against the barbaric terror that threatens the peace of the whole world. Your war is our war. Your values are our values. They are the values of the entire enlightened world.”

Attendees at the rally waved French flags and held signs with messages such as, “France, Israel is with you.” Many rally participants were French, and the crowd sang the French national anthem, along with the Israeli anthem, at the event’s close.

In a statement issued Saturday night, Israeli Prime Minister Benjamin Netanyahu also expressed Israel’s solidarity with France, and instructed Israel’s intelligence services to work with their French counterparts. He also drew a parallel between the attacks in France and the string of terror attacks Israel has experienced since early October.

“Terrorism must always be condemned,” he said. “It must always be fought. Innocent people in Paris, like those in London, Madrid, Mumbai, Buenos Aires and Jerusalem, are the victims of militant Islamic terrorism, not its cause.”