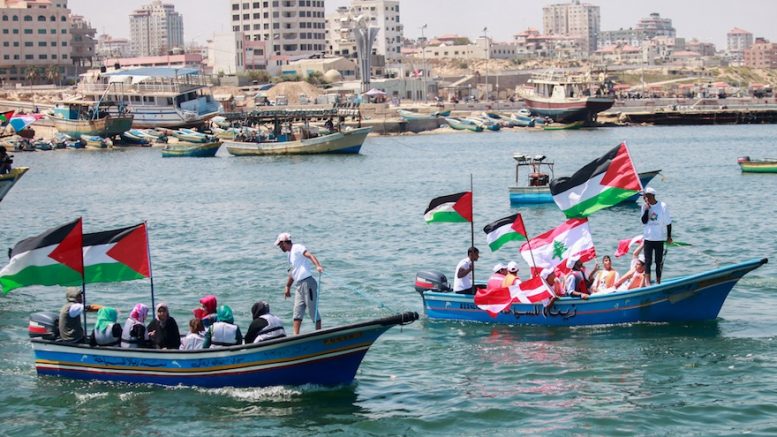 Gazans mark the fifth anniversary of the Mavi Marmara Gaza flotilla at the Gaza City seaport, May 31, 2015. (Aaed Tayeh/Flash90)

JERUSALEM (JTA) — The foreign ministries of Israel and Turkey simultaneously signed a reconciliation agreement on June 28, 2016, six years after relations were cut off.

The director of Israel’s Foreign Ministry, Dore Gold, signed the agreement in Jerusalem. The identical agreement was signed in Ankara by Turkey’s undersecretary for foreign affairs, Feridun Hadi Sinirlioğlu, who had led his country’s negotiating team.

The agreement had been formally announced a day earlier.

“Israel has made an important strategic agreement in terms of security, regional stability and the Israeli economy,” Israeli Prime Minister Benjamin Netanyahu said Monday afternoon in Rome, where he had briefed U.S. Secretary of State John Kerry on the agreement.

Relations between Israel and Turkey broke down in the aftermath of the Mavi Marmara incident in 2010, when Israeli commandos boarded and killed nine Turkish citizens in clashes on a boat attempting to break Israel’s Gaza blockade.

Israel’s Security Cabinet is expected to approve the agreement when it votes on Wednesday even though Defense Minister Avigdor Liberman, Education Minister Naftali Bennett and Justice Minister Ayelet Shaked have said they would vote against it.

Under the deal, Israel will create a $20 million humanitarian fund as compensation to the families of the Mavi Marmara victims, which would not be released until Turkey passes legislation closing claims against the Israeli military for the deaths. Netanyahu has apologized for the deaths, another Turkish condition for the resumption of diplomatic ties.

Turkey withdrew its demand that Israel halt its Gaza blockade, but Israel will allow Turkey to establish building projects in Gaza with the building materials entering Gaza through Israel’s Ashdod Port. The building projects reportedly include a hospital, power station and desalinization plant.

Turkey also has agreed to assist in repatriating two Israeli citizens and the bodies of two Israeli soldiers being held by Hamas in Gaza.