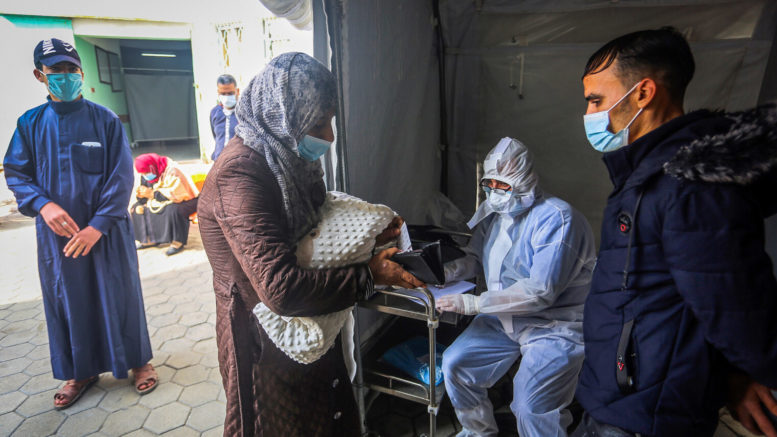 Palestinians wait to be tested for the coronavirus at a health center in Rafah, in the southern Gaza Strip, Jan. 5, 2020. (Abed Rahim Khatib/Flash90)

(JTA) — Israel is sending 5,000 coronavirus vaccines to the Palestinian areas, earning praise from some U.S. lawmakers who had urged the country to extend its successful vaccination program to the West Bank and Gaza Strip.

“In accordance with the recommendation of the Defense Minister and the Coordinator of Government Activities in the Territories, the political echelon approved the transfer of 5,000 vaccine doses to medical teams in the Palestinian Authority,” The Times of Israel quoted Israeli military officials as saying Monday.

Israel had been saying that it was not obligated under law or prior agreements to supply Palestinians living under Palestinian Authority rule with the vaccine. The P.A. leadership has sent mixed signals, saying it would prefer to get the vaccines from other sources, but more recently asked for 10,000 doses for its frontline health care workers.

A number of Democrats had faulted Israel for not doing enough to get vaccines to the Palestinians. Sen. Tim Kaine, D-Va., said Monday that he had raised the issue with the Biden administration and was “glad to see” Israel deliver the doses.

Also noting Israel’s delivery of the vaccines was Rep. Jamaal Bowman, a progressive congressman from New York who added that he believed Israel was obliged to deliver the vaccines to the entire Palestinian population.

Bowman, who last week posted and then deleted a tweet criticizing Israel, on Tuesday posted a letter on Twitter to Israel’s consulate in New York asking for a meeting to discuss the issue.

“The entire population in the West Bank and Gaza must also be covered,” said Bowman, who said he was “heartened” by the news that Israel was set to deliver 5,000 doses.

Bowman told Acting Consul General Israel Nitzan that the issue for him was personal as a Black man.

“I know the feeling of being neglected in my government and society, of feeling like a second class citizen or not a citizen at all in my own home,” he said.

Be the first to comment on "Israel sends 5,000 coronavirus vaccines to the Palestinian areas"