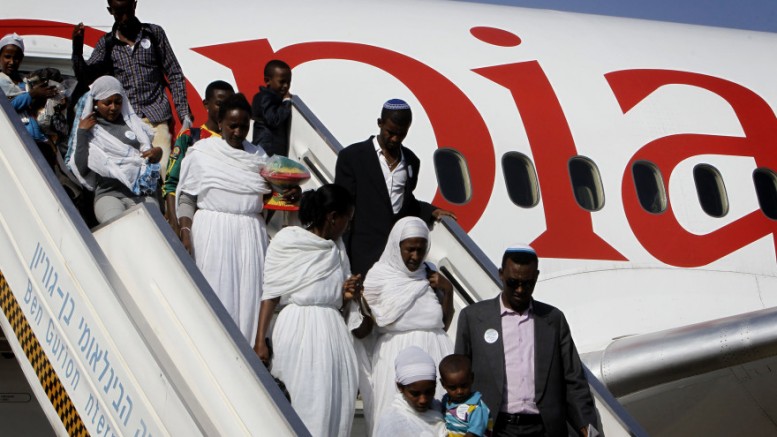 Ethiopian Jews arriving at Ben Gurion Airport as part of Operation Wings of a Dove, which supposedly ended the Ethiopian immigration to Israel, Aug. 28, 2013. (Miriam Alster/Flash90)

JERUSALEM (JTA) — Israel’s government has approved the entry of some 9,000 Ethiopians who claim Jewish descent, two years after bringing what it said was the final airlift of Ethiopians to Israel.

The Cabinet on November 15 unanimously voted to bring the Ethiopians, known as Falash Mura, to Israel over the next five years.

Falash Mura are Ethiopians who claim links to descendants of Jews who converted to Christianity generations ago but now seek to return to Judaism and immigrate to Israel. Their permanent entry into Israel will be dependent on completing the conversion process.

“Today we made an important decision, to bring to Israel the last of the Ethiopian communities waiting in Addis Ababa and Gondar,” Israeli Prime Minister Benjamin Netanyahu said in a statement after the vote. “This is an important step that will enable the reunification ofEthiopian families who are in the country, some of which have been split over the years.”

About 135,000 Jews of Ethiopian descent are living in Israel. Ethiopian Jews were airlifted to Israel during Operation Moses in 1984 and Operation Solomon in 1992.

Israel announced in August 2013 that it had brought the last of the eligible Falash Mura to the country after a steady trickle of approximately 200 Ethiopian immigrants per month had been coming to Israel since 2010, when Israel launched Operation Wings of a Dove after checking the aliyah eligibility of an additional 8,000 Ethiopians. Many of those that remained had family who were already in Israel.

Be the first to comment on "Israel OKs immigration of 9,000 more Ethiopians"