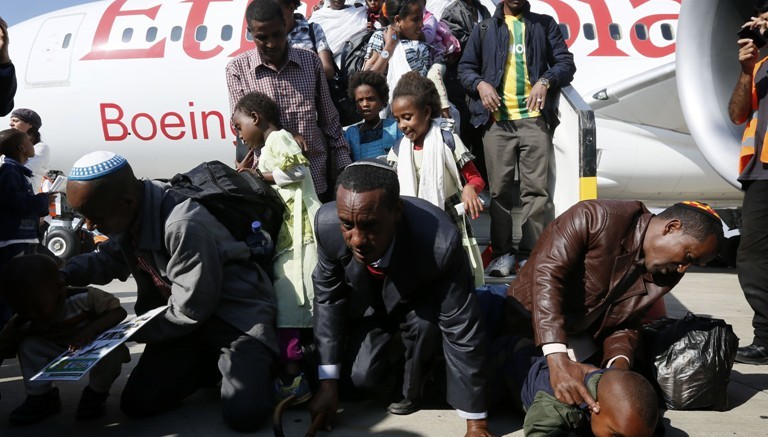 TEL AVIV (JTA) – The Israeli government has approved entry of the “last” group of Ethiopian Jews awaiting immigration to Israel.

The move comes two years after the arrival of 450 Ethiopian Jews then deemed to be the “last” such group. Indeed, there have been several groups said to be the last since Ethiopian immigration began in the 1970s.

The initial wave was supposed to have ended with a giant military-style operation in 1991. Then Ethiopian aliyah “ended” again, in 1998. Then again in 2008. And again in 2010. Each time, advocates of continuing Ethiopian immigration prevailed upon the government to let in not just more Jews, but other groups with Jewish ancestry.

Experts and Ethiopian community members say this group may actually be the one capping three decades of Ethiopian immigration. But when the new arrivals hit Israel, they’ll encounter a whole new set of challenges. Ethiopian-Israelis lag in employment, wages and education, and have protested what they call institutional discrimination.

“The need is not to just bring olim to the land, but to invest in their integration,” said Roni Akale, director-general of the Ethiopian National Project, which develops educational programs for Ethiopian youth. “If they don’t invest, there will be damage. The state needs to take care of them.”

Here’s who Israel’s 135,000 Ethiopian Jews are, why their aliyah has taken more than 30 years and how the immigrants have fared.

Jews have lived in Ethiopia for 3,000 years.

Many believe that Jews first arrived in Ethiopia three millennia ago after splitting off from King Solomon’s ancient Jewish kingdom. Since then, Ethiopian Judaism developed mostly in isolation from the rest of world Jewry. Ethiopian Jews do not celebrate post-biblical holidays like Hanukkah and Purim, and they maintain their own unique celebrations, like the fall festival of Sigd.

Successive Ethiopian governments persecuted the Jews, leaving them impoverished and relatively isolated in agrarian communities amid the country’s northern mountains. Contacts with outside Jewry increased in the 20th century. In 1973, Ovadia Yosef, then Sephardic chief rabbi of Israel, ruled that the Ethiopian community was Jewish, paving the way for their immigration.

Ethiopian aliyah began with a trickle in 1977. Between 1984 and 1985, thousands of Ethiopian Jews fleeing famine crossed into Sudan, some of them traveling for up to a month on foot. From there, in a mission called Operation Moses, Israeli Defense Forces planes airlifted about 8,000 to Israel.

In 1991, with Ethiopia’s government on the cusp of being overthrown by rebel groups, mass aliyah resumed with the clandestine Operation Solomon, which brought 14,500 Jews to Israel on 40 flights in just 36 hours. Some of the flights held double their normal capacity to save time.

Debates over who is an Ethiopian Jew have drawn out the aliyah process.

After Operation Solomon, advocates for the community urged the government to let another group of Ethiopians move to Israel. The group, whose members are known as Falash Mura, has Jewish ancestry but is descended from Ethiopians who converted to Christianity about a century ago.

Some Israeli officials opposed the aliyah of the Falash Mura, saying their ties to Judaism were too weak. But in the 1990s and 2000s, successive governments brought waves of Falash Mura to Israel, who underwent formal conversion to Judaism after their arrival.

Experts say this wave may really be the end of Ethiopian aliyah because it includes every Falash Mura known to Israel. Its primary purpose,according to the government, is to reunite families split by earlier immigrations. To qualify for this round, candidates need to have family in Israel and arrived in pre-aliyah compounds in Ethiopia run by the Jewish Agency by the start of 2010.

Ethiopian-Israelis lag in education and employment.

For many Ethiopians, getting to Israel is only half the battle. Ethiopian immigrants, often from poor and uneducated families, have struggled to integrate.

According to data compiled by the Myers-JDC-Brookdale Institute, a government-sponsored think tank, as of 2013 only 27 percent of Ethiopian-Israeli students qualified for university, as opposed to 51 percent of all Israelis. Average wages for Ethiopian-Israelis were more than a third lower than the Israeli average.

Ethiopian-Israelis claim that state institutions discriminate against them. Following the emergence earlier this year of a video showing police officers beating an Ethiopian-Israeli soldier, Ethiopians massed in protest. Police responded with stun guns and a water cannon. Following the unrest, Prime Minister Benjamin Netanyahu promised to take steps to address the discrimination.

“Among the general population, I’m sure there are some stereotypes, prejudices that affect access to employment,” said Myers-JDC-Brookdale director Jack Habib. “How much of that is perception and how much of that is reality we don’t know. But there are these strong feelings of discrimination. It’s not an issue we can ignore.”

Be the first to comment on "Israel just approved immigration for 9,000 Ethiopian Jews — here’s who they are"