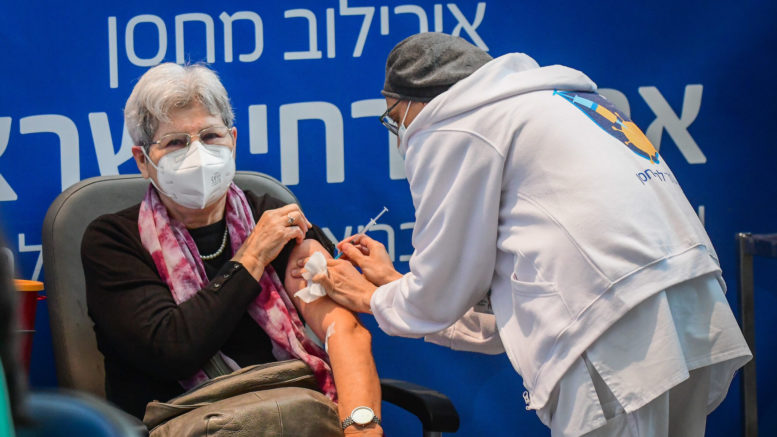 A woman receives a fourth dose of the COVID-19 vaccine at the Tel Aviv Sourasky Medical Center in Tel Aviv Jan. 2, 2022. (Avshalom Sassoni/Flash90)

(JTA) — Israel has begun administering a second booster shot to citizens over 60 and to medical workers who received their first booster at least four months ago.

Prime Minister Naftali Bennet explained the move, a bid to protect vulnerable segments of the population against the Omicron variant that is currently sweeping through the country, on Sunday.

“We’ve been first in the world [with the] booster shots and that policy has protected Israel’s citizens well,” Bennett said, according to The Times of Israel.

While the ability of a fourth coronavirus vaccination to boost immunity has not been proven, the question is currently being studied at Israel’s Sheba Medical Center in a study of 6,000 people. A fourth shot was already being offered to nursing home residents and immunocompromised people in recent days after the Health Ministry approved the move Thursday.

In July, Israel became the first country in the world to offer residents a third coronavirus vaccine dose.

Some experts have criticized the move for getting ahead of the data. Anthony Fauci, President Biden’s chief medical adviser, said he would recommend focusing on third shots, which have been shown to increase protection against the Omicron variant, before moving on to a fourth shot.

“Before we start talking about a fourth shot, it would be very important for us to determine the durability of protection, particularly against severe disease, for the third-shot booster of an mRNA [vaccine] and the second shot of a [Johnson & Johnson],” Fauci said at a press briefing last week, according to the New York Post.

The number of new cases of the coronavirus in Israel has skyrocketed in recent days, approximately tripling over the course of a week. Government officials and health experts have predicted those numbers will continue to rise with tens of thousands of new cases each day until the Omicron variant runs out of new people to infect.

Despite the surge in cases, the government has chosen not to impose a lockdown as was done in previous waves, choosing instead to focus on encouraging vaccination. The number of serious cases has not risen at the rate of the number of cases overall and the majority of hospitalized COVID patients are unvaccinated.