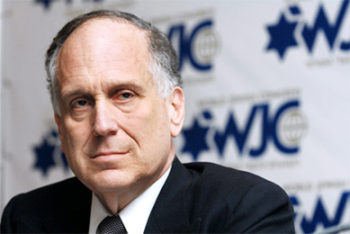 NEW YORK – World Jewish Congress President Ronald S. Lauder has praised Israel, with the assistance of the United States, Jordan, Canada, and the EU, for its “critical humanitarian intervention and efforts” in helping hundreds of Syrian ‘White Helmet’ rescue workers and their families flee in a daring overnight  evacuation as part of the wider ongoing “Good Neighbor” operation.

“Over the last few years, Israel has saved the lives of thousands of wounded Syrians, opening its borders and hospitals to those in need from an enemy nation. Hundreds and thousands of Syrians are still living in imminent danger, and it is beyond praiseworthy to witness the efforts being made on their behalf,” Lauder said.