On Yom Kippur, Karen Farkas gave a heartfelt address to the Edmonton Beth Israel congregation about the wonderful benefits of investing in Israel Bonds. Her address appears below:

Shalom and l’shanah tova.  I wish you all an easy fast.

My name is Karen Farkas and I have been asked to speak with you this year about Israel Bonds.  I accepted with pleasure.

I was born the same year as Israel and have, therefore, grown up with the expectation that there would always be a Jewish state.  When I was 3 years old, David Ben-Gurion established Israel Bonds to raise capital for the young Jewish state. 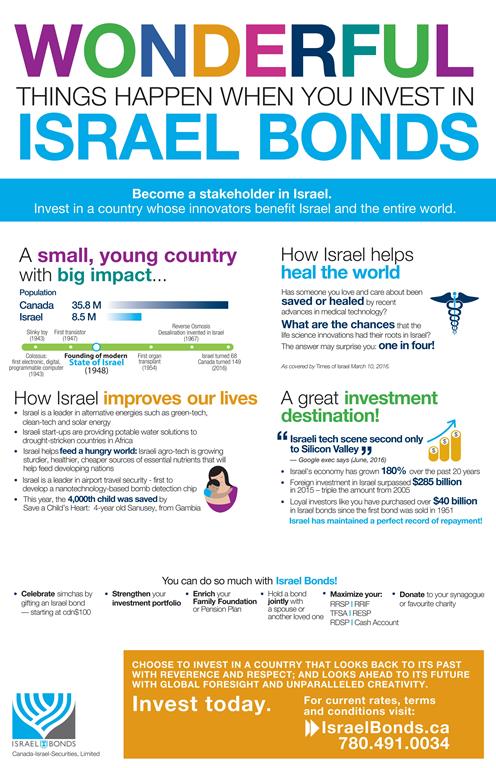 I remember that when I was a young girl, my mother and father consistently purchased State of Israel bonds.  Every so often, my mother would receive a lovely pin as a thank-you for their purchases.  (I wonder if my father felt jealous that he did not receive a tie tack or cufflinks?)  She still has her pins and, when I am at her home, I still enjoy looking at them and, on occasion, wearing one to synagogue.

As early as 1957, it was reported in Time magazine “bond sales alone amount(ed) to an astonishing 35% of Israel’s special development budget.”  Golda Meir, who was Israel’s foreign minister at that time, stated, “the central role in building our economic strength has been played by Israel bonds.”

Today, Israel is one of the most resilient and technologically advanced market economies in the world.  Israel has a skilled workforce and a high concentration of venture capital, both of which allow the country to lead in innovative industries.  The World Economic Forum’s 2016 Global Competitive Index placed Israel third out of 140 countries for both “capacity for innovation” and “quality of research institutions”.

According to the Israel Ministry of Finance, earlier this year, Israel is ranked first globally both for highest rate of Research & Development expenditures as a percentage of Gross Domestic Product and for the highest density of new start-ups.  As well, Israel ranks second in the number of non-U.S. listed companies on NASDAQ.  So it sounds like Israel is doing quite well, thank you very much, and maybe doesn’t need our help any more.

Proceeds from the sale of bonds continue to play a decisive role in Israel’s rapid evolution into a groundbreaking, globally emulated leader in high-tech, clean-tech and biotech.  Israel bond capital has helped strengthen every aspect of Israel’s economy, enabling national infrastructure development.  Today, expanded transportation networks enabled by investments in Israel bonds help facilitate shipment of ‘Made in Israel’ technology around the world, enhancing national export growth.  This is even more important today with the growth of the Boycott-Divestment-Sanctions movement.  Regardless of your political leanings, I think we can all agree that unilateral actions against Israel have at some level at least a tinge of anti-Semitism.

During this period of economic uncertainty these bonds are a safe investment and, as a bonus, have a relatively high rate of interest, compared to Government of Canada or U.S bonds.  There are reasons for this of course.  The bonds have higher perceived risk and are less marketable than ordinary investments.  However, the State of Israel is one of few countries in the world that has always repaid its debts, completely and on time.  And with terms ranging from 2 years to 10 years, lack of marketability should not be viewed as a problem.

All of us in this room have a lot for which to be grateful.  We are living in one of the best countries in the world, if not the best.  We are able to gather to pray without fear of discrimination.  We do not have to worry about an imminent attack.  We all have roofs over our heads and food on our tables.  And, we have intelligent and rational people running for office in all our elections.

It’s not the 50s anymore and, as adults, my husband Clyde and I have been delighted to be able to purchase Israel Bonds through the years both for ourselves and for others.  It is a mitzvah for both the families and for Israel when a Mazel Tov bond is purchased in honour of a birth or as a bar or bat mitzvah present.  Your investment can be as little as $100 or as much as you wish.

I am a Zionist, and am not ashamed to admit it to anyone.  I have not and do not blindly agree with or support all of the actions of past and current Israeli governments, just as I have not blindly agreed with or supported all the actions of the U.S and Canadian governments.  But all three of my homelands allow me to disagree with their policies without fear of being jailed or otherwise punished.  Let’s show Israel our love and support by contributing to a healthy and prosperous economy in this year 5777.

Be the first to comment on "Investing in Israel Bonds"