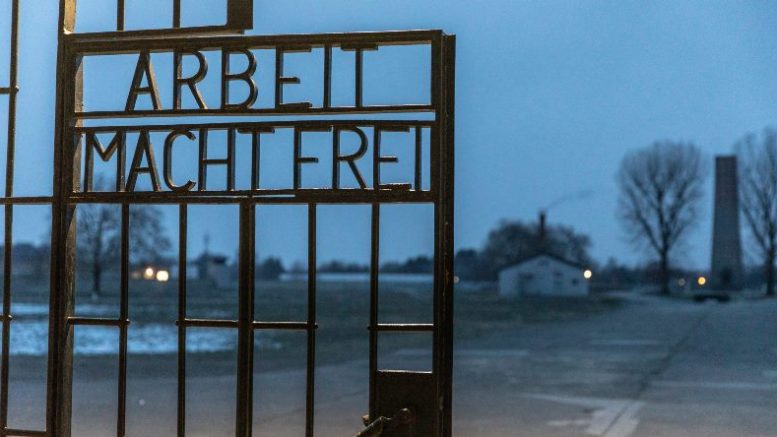 A gate with the inscription “Work Sets You Free” at the Sachsenhausen concentration camp memorial in Oranienburg, Germany, Jan. 25, 2019. (Omer Messinger/Getty Images)

(JTA) — On the Shabbat morning of April 27, Hadassah member Lori Gilbert-Kaye was murdered while celebrating Passover at the Chabad of Poway. The synagogue’s rabbi, a male congregant and an 8-year-old girl were wounded as well by the self-avowed white supremacist shooter.

We know that anti-Semitism is on the rise globally, but grim statistics don’t adequately convey the terror of a shooting at synagogue or the anguish that comes with it.

The data also don’t convey the dreadfulness of less than lethal acts of anti-Semitism: A 9-year-old boy walking on the street and being punched in the face because he is wearing a yarmulke and has sidelocks, a Hasidic man being beaten and choked or high school students in Wisconsin proudly displaying the Nazi salute in a group photo.

Knowing that hatred exists is not enough. We also have to take active steps to combat it.

Teaching Holocaust history to children is one proactive way to combat today’s anti-Semitism. A child who understands the true impact of a swastika or recognizes the deeply ugly nature of a slur about Jews and money will be equipped to identify and call out anti-Semitism on their college campus, in their future industry and in their community.

While anti-Jewish bigotry is rising, memory of the Holocaust is waning. A recent survey by the Conference on Jewish Material Claims Against Germany found that 66 percent of American millennials do not know what Auschwitz was.

As Hadassah women, as mothers and grandmothers, as children and grandchildren of survivors, and as fighters for justice and humanity historically and today, we feel the responsibility to teach the next generation to recognize the risk of genocide so they are empowered to prevent it when they grow up.

But most states don’t include Holocaust education in their secondary school curricula. Students are learning about the battles of World War II and the bombing of Hiroshima, but they don’t know what happened during the Holocaust to the Jewish people, to the Roma, to members of the LGBTQ community and to people with disabilities.

Some teachers don’t know how to teach such a sensitive subject or lack instructional resources or the funds to visit memorials. Others skip it because its inclusion isn’t mandated: Only nine states have laws requiring Holocaust education.

We need federal legislation to make robust anti-hate curricula accessible to every school.

That is why Hadassah is one of the leading not-for-profit organizations championing the bipartisan Never Again Education Act. This proposed legislation would create a $2 million discretionary fund within the U.S. Department of Education to support Holocaust education for middle and high school students in districts across the country. It would train classroom instructors, provide textbooks and resources, and help facilitate programs, speakers and visits to Holocaust museums and memorials.

The Never Again Education Act would help combat hate and contribute toward a generation of tolerant and responsible American citizens. The bill already has the support of 90 members of Congress. Hadassah’s 300,000 members and 300 organizational partners are mobilizing to encourage additional co-sponsors.

Hadassah turns its values into action every day, and we are committed to combating anti-Semitism through this powerful legislation. Let’s teach the next generation what can happen when anti-Semitism and hate crimes go unchecked and give them the tools to fix the rising intolerance in our communities. That is the way to ensure our children know and experience less hatred than we do.

Be the first to comment on "In the wake of another deadly synagogue shooting, we need Holocaust education more than ever"