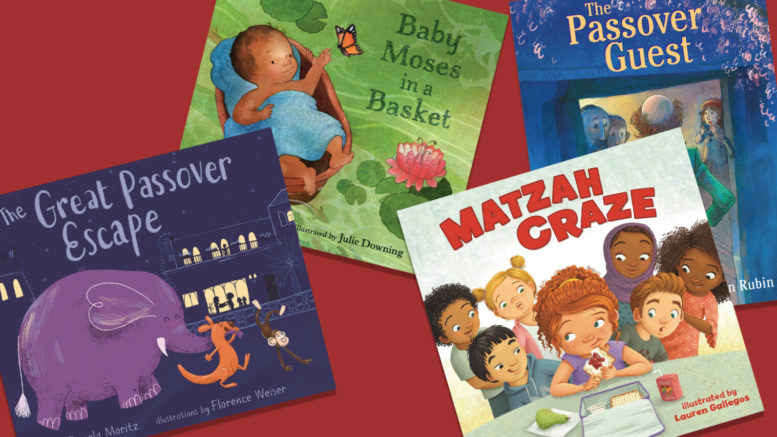 BOSTON (JTA) — On the eve of Passover during the Depression, a juggler in ragged clothes is invited into the home of a poor family that has a bare Seder table. It’s a poignant scene in “The Passover Guest,” the captivating debut picture book by author Susan Kusel, a longtime Judaica librarian who was inspired by a classic Yiddish tale, “The Magician,” by I.L. Peretz.

By lovely coincidence, readers have that rare opportunity to enjoy another retelling of the beloved story in a new publication of “The Magician’s Visit,” adapted by Barbara Diamond Goldin, with new illustrations by Eva Sanchez Gomez. The original 1993 edition was among the earliest books by Goldin, now one of the country’s most acclaimed writers of Jewish children’s books.

A different Seder table takes center stage in “The Four Questions,” where a bespectacled lion reads from a Haggadah at a lavish ceremonial meal with guests that include a zebra, a young monkey and other whimsical animals. The gloriously illustrated book is a new edition of the 1989 classic by the late artist Ori Sherman with text by the acclaimed novelist and poet Lynne Sharon Schwartz.

These are some of the standouts in this spring’s crop of engaging new children’s books for Passover, the eight-day Festival of Freedom that begins this year on the evening of March 27.

Other titles feature lighthearted humorous stories and a lively interactive family Hagaddah with tips for this COVID-19 era, when many Seder guests may be joining remotely.

In simple rhyming verse, Yacowitz reimagines the biblical story of baby Moses as his mother sets him adrift in a basket on the Nile to save him from harm from the Egyptian Pharaoh. The river’s creatures protect baby Moses until he is discovered by Pharaoh’s daughter. Downing’s beautifully colored double-page illustrations of a wide-winged ibis, a hippo, crocodile and an escort of butterflies bring the story to life.

Here’s a lively family Haggadah that encourages Seder participants of any age to feel a personal connection to the Passover story. The engaging style follows the traditional order of the Seder and features Jewish customs from around the world along with thought-provoking questions. There are plenty of tips to include Remote guests.

In this playful and zany story, the award-winning cartoonist Silberberg sets the humorous action in an imaginary classroom where the “students” are types of breads. Alfie Koman, a shy matzah, tries to retell the story of Passover, but the school sourdough, Loaf, takes over and stirs trouble. Alfie must decide whether to leave his hiding place to confront the mean-spirited Loaf. Expect lots of laughs from Loaf’s made-up version of the Ten Plagues (among them no WiFi and broccoli for dessert).

At Noa’s multicultural school, the kids like to swap what’s in their lunch boxes. But during Passover, when Noa has an unusual looking cracker – her matzah – she explains to her friends that she can’t swap. In Kiffel-Alcheh’s delightful rhyming story, the spunky Noa, with copper-toned skin and frizzy red hair, figures out how to share her favorite ways to eat matzah.

It’s the eve of Passover at the Biblical Zoo in Jerusalem, and Elle the elephant and Kang the kangaroo are eager to find a way to escape and find a Seder. Their friend Chimp answers their Passover questions and joins the adventure. Will the trio get past the locked zoo gate and find a ritual meal? Pamela Moritz’s humor-filled story is embellished with Florence Weiser’s brightly colored illustrations.

Set in Washington, D.C., in 1933, during the Depression, Kusel’s warmhearted story takes its inspiration from Uri Shulevitz’s version of Peretz’s Yiddish tale “The Magician,” which she loved as a child. On the eve of Passover, a young girl named Muriel wanders around her favorite sites in the nation’s capital. She’s in no hurry to go home because her family does not have enough money for a Seder.

At the Lincoln Memorial, Muriel is enchanted by a juggling magician dressed in rags. When the stranger turns up at her family’s door and is invited in for Passover, their bare table miraculously fills with an abundance of food for the Seder. Could the mysterious guest have been Elijah? Sean Rubin’s vibrant, expressive illustrations pay tribute to Marc Chagall, Rubin writes in an artist’s note.

In this masterful retelling of Peretz’s Yiddish tale, Goldin takes readers back to an old world shtetl. In the days before Passover, a stranger dressed in rags mesmerizes the villagers with his spellbinding magic. When he turns up at the door of a couple who have become too poor to make their own Seder, the magician produces a wondrous and full table. May they partake in this Seder? the couple asks. And who is the stranger, who has disappeared when they return. Gomez’s colorful illustrations capture the era and the magic of the story.

“Moses Could Have Been Selfish”
MJ Wexler
MJ Wexler Books; ages 3 to 7

In this simply told rhyming story, Wexler retells the story of Moses and the Exodus from Egypt in an accessible style for young kids, emphasizing standing up against injustice. Questions at the end encourage discussion.

In this exquisite pairing of text and art, Sherman and Schwartz captivate readers – kids and adults – with the Four Questions traditionally recited by the youngest child at the beginning of the Seder. The lavishly illustrated book is a new printing of the original first published in 1989.

Like the Seder itself, the book has the air of mystery and intrigue. Schwartz answers the Four Questions with a lyrical narrative of the Passover story and its rituals. Sherman fills the bordered pages with gloriously colored illustrations of whimsical elephants, monkeys, fish, goats and birds. Turn the book upside down for a view of the Four Questions written in Hebrew calligraphy and other illustrations.

A back page note by Ori Z. Soltes, a scholar of Jewish art, explains that Sherman’s dazzling art carries forth traditions from hieroglyphics to illuminated Jewish manuscripts and the centuries-old painted murals of Eastern Europe’s wooden synagogues.

Be the first to comment on "In new Passover children’s books, a bespectacled lion reads the Haggadah"