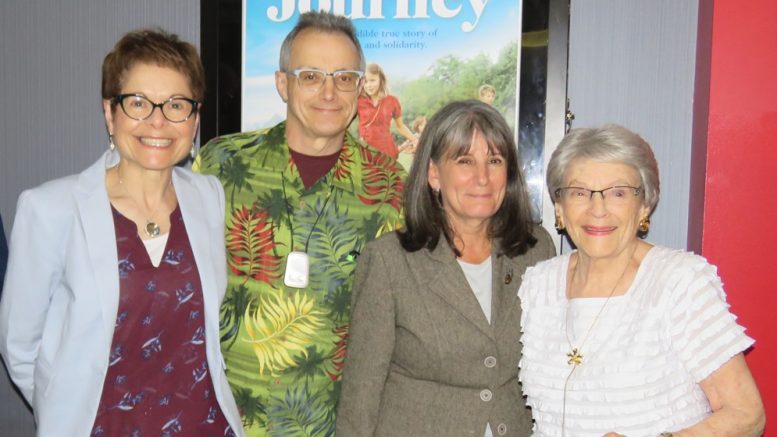 The Nolan family and friends generously sponsored two of the films that were screened at the Edmonton Jewish Film Festival held in March - in memory of Carla Nolan z"l who passed away last year after a courageous battle with cancer and Crohn's disease.

(EJNews) -The sponsor for the March 6 Matinee screening of Fanny’s Journey at the Edmonton Jewish Film Festival (EJFF) was the Nolan family and friends, in loving memory of Carla Nolan z’l who passed away in Toronto last year after a courageous battle with cancer and Crohn’s disease.

Born in Edmonton in 1957 to Ruth and Harry Nolan z’l, Carla loved theatre, comedy and film. She remained optimistic and filled with love and humour throughout her life and she is dearly missed by family and friends. In addition to Fanny’s Journey which is the story on a young girl’s courage in the face of unbelievable adversity, the family of friends of Carla Nolan also sponsored the short comedy The Chop.

Carla’s sister Jan Nolan and her niece Sarah Yellin gave some opening remarks at the EJFF before the screening of the films to describe Carla’s relationship with film, with family and with Edmonton.

“My sister Carla grew up in Edmonton, attended Talmud Torah, Junior Congregation, Young Judea and was part of the Israeli Dance group,” remarked Jan Nolan. “She moved to Toronto but stayed close to her Edmonton roots.  Most of her closest friends throughout her life were people she met in her kindergarten class at Talmud Torah.

“In Toronto, Carla was one of the first staff members hired by YTV.  Every December, she would be torn between finishing the last taping of ‘Santa Calls’ on YTV and rushing back to Edmonton for the annual family Chanukah party or reunion.

“Carla had a great sense of humour and hated the gray Toronto winters.  Her solution was to create the World of Comedy International Film Festival to brighten those long February nights.  The festival and Carla are no longer with us but all of the materials are in the University of Toronto Archives, for those of you who are budding film buffs.

“Our thanks to all of the friends and family who donated to sponsor the two films at this festival.  As you watch the film this afternoon, have a laugh or a cry in Carla’s memory.”

“It seems only fitting that the film selected to be played in Carla’s memory is a children’s film,” added Sarah Yellin.  “While many of you know about Carla’s many accomplishments in the film industry, the world of comedy film festival she created herself, and her work at YTV, I have a slightly different perspective, not having been old enough to attend those events.

“Growing up in Toronto, I did get to attend the Sprockets Film Festival, a festival put on by TIFF entirely comprised of children’s films. When I was about 6 my aunt Carla volunteered as a parent chaperone on my class field trip to Sprockets. I’ll never forget how cool it felt to have my cool aunt (who of course, knew everybody) show us around and introduce us to the important people in headsets. To a group of 6 year olds, this was truly a VIP experience.

“Even 10+ years later when I moved back to Toronto Carla remained my movie buddy. When I was stressed out trying to figure out the ins and outs of university Carla and I would still meet up to catch a movie. While I can’t name too many of the films we went to, I always remember the Second Cup across the street where we would inevitably end up talking until they closed and kicked us out, telling stories about school, and travel, her experiences in so many areas of life that I got the privilege of hearing about.

“Thank you to everyone for coming today and thank you to the EJFF for showing this film in her honor.”

The EJFF was sponsored by the Jewish Federation of Edmonton as well as the Centre for Israel and Jewish Affairs, the Edmonton United Jewish Appeal, Israel Bonds, Partnership 2Gether and the Edmonton Downtown Business Association.

Each individual film was also sponsored. In addition to the Nolan family and friends, other sponsors included ORT, the Aviv Israeli Folk Dance Association, Friends of the Galilee Panhandle, JAHSENA, Canadian Hadassah-Wizo and Servus Credit Union as well as some generous members of the Edmonton Jewish Community.