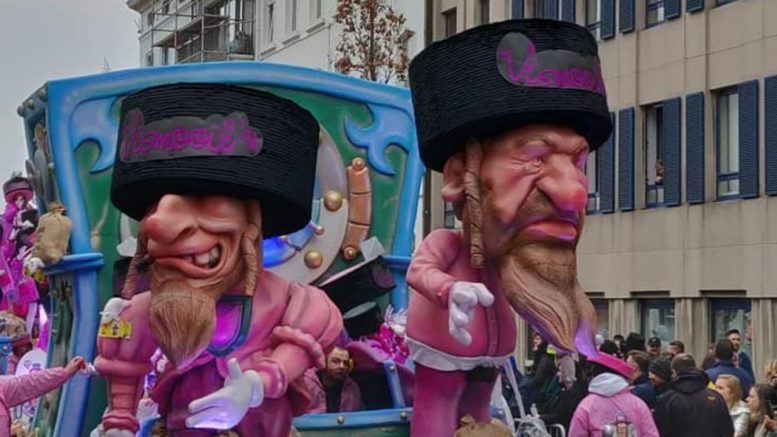 A parade float at the Aalst Carnaval in Belgium featuring caricatures of Orthodox Jews atop money bags, March 3, 2019. (Courtesy of FJO)

(JTA) — I initially had some sympathy for the creators of an anti-Semitic carnival float in Belgium.

Studying their CVs and past creations for the annual carnival of Aalst, I saw that they were a group of some 20 upstanding citizens — a fireman, a technician, an Education Ministry official and a police department employee, to name a few. They had invested countless unpaid hours to produce something they thought was beautiful but ended up horrifying viewers all over the world.

Their creation, which they unveiled Sunday at Belgium’s most celebrated carnival, featured two huge puppets depicting pink-clad haredi Orthodox Jews. One of them leers while smoking a cigar, a rat perched on his shoulder. Against a synagogue facade, the puppets have money bags at their feet. A platform following the float carried revelers dressed like the puppets who danced to a song about “bulging coffers” and “Jews getting extra fat.”

The float unleashed a storm of impassioned condemnations. The Simon Wiesenthal Center called the display “sickening.” B’nai B’rith International termed it “disgusting.” Both umbrella groups of Belgian Jews filed a federal complaint for incitement against the group, called Vismooil’n, saying the float looked like Nazi propaganda.

Even the European Commission slammed the display, with a spokesperson saying “It is unthinkable that such imagery is being paraded on European streets 70 years after the Holocaust.”

So I called up the lyricist behind the float’s song, Pascal Soleme, to ask why the group chose to create such imagery and whether the members had anticipated how offensive it would be to Jews.

I had hoped to introduce some nuance to what was condemned universally as crass racism. Were the creators aware that they were trafficking in anti-Semitic tropes? Did they get carried away in the aesthetics of the float without really considering the content? Was there a level of irony or parody an outsider couldn’t understand?

But rather than offering real explanations, or even expressing any regret for the fallout or trying to acknowledge where it came from, Soleme doubled down. The 52-year-old father of three, who works for the Aalst Police Department, said he thought the float was funny and cited the support of his mayor.

“Mayor Christoph D’Haese totally has our backs, he told us we’ve done nothing wrong,” Soleme told me. D’Haese even told the group that his office would cover any fine imposed by the authorities, Selome said.

D’Haese defended the Vismooil’n group, saying on Tuesday that its float was not intended to offend and that “such things should be allowed at the Aalst Carnaval.” The event was added in 2010 to UNESCO’s list of events that contribute to the “Intangible Cultural Heritage of Humanity.”

Filip de Vidts, a technician and the secretary of Vismooil’n, even referred me to D’Haese for a reaction. Treasurer Johan de Plecker, who works for the Education Ministry, did not reply to my request for an interview.

As for Soleme, he has “absolutely no regrets” about participating in the display.

“I think the people who are offended are living in the past, of the Holocaust, but this was about the present,” he said. “There was never any intention to insult anyone. It was a celebration of humor.”

The Jewish theme, he said, was “because we weren’t sure we’d be doing a 2020 tour [because of rising costs]. So that would mean we’d be taking a sabbatical, and it went on from there.”

Vismooil’n named the float “Sabbat Jaar,” or “sabbath year,” which in Dutch primarily refers to the shmittah, the biblical sabbatical year in which Jews are commanded not to work the land. But it can also mean a general sabbatical.

In an interview with a blogger covering the Aalst Carnaval, an unnamed spokesperson for the group offered a similar explanation. (The blogger has since deleted the text.)

“Everything has become so expensive, [we thought that] if we do 2019, there would be no more money left for next year. So we all went quiet until we smartly decided to go for the Sabbath Year and that was that. So simple,” the member said.

It was a telling quote, according to Joel Rubinfeld, the president of the Belgian League Against Anti-Semitism, or LBCA.

“Prices are rising, so who do they blame? The fat, greedy Jew,” he said.

On a Facebook page of carnival enthusiasts, the protests around the float prompted a flood of anti-Semitic humor.

One blamed “the sad Jews, closed off from the rest of society in Antwerp, who have no sense of humor.” Another referred to Jews as “dick cutters,”  adding they are “whiners with sausages for ears and woolly curls on their heads.” Commenting on Jewish anger over the float, another wrote: “Later you wonder why Jew hatred is growing …”

Some commenters resented criticism of the float, calling it an attempt to impose political correctness in the Flemish Region, a federal state of Belgium whose local language is Flemish Dutch. Aalst is in the region.

“As we host those guests, we are forbidden to celebrate our own culture on our own land,” someone named Guido Schokaert wrote in the Facebook discussion.

The Aalst carnival case is the latest example of how quickly and thoroughly institutional anti-Semitism can corrupt upstanding institutions, like the Aalst Carnaval (or Britain’s Labour Party).

“The problem is not the carnival,” Rubinfeld said. “What’s happening in recent years at the carnival is a symptom of a wider problem, which the return of 1930s anti-Semitism, alongside the upgraded version that we’ve become used to, that targets Israel as a substitute for Jews and visa versa.”

The Vismooil’n float is not the first time that this return manifested itself at the carnival, which is the local edition of celebrations that take place throughout parts of Europe and the Americas annually in anticipation of Lent, the 40-day period before Easter.

In 2013, a different group designed an Aalst carnival float resembling a Nazi railway wagon used to transport Jews to death camps. The designers of the float, which was meant as a protest against nationalist Flemish politicians, marched dressed as Nazi SS officers and haredi Orthodox Jews. A poster on the wagon showed Flemish Belgian politicians dressed as Nazis and holding canisters labeled as containing Zyklon B, the poison used by the Nazis to exterminate Jews in the gas chambers.

And in 2009, at least two participants dressed up as Orthodox Jews with fake hooked noses, a yellow star on their chests and an Arab shawl around their shoulders.

The Aalst parade this year also featured a group called Forza Witkap, whose members came dressed in the white gowns and pointy hoods of the Ku Klux Klan. Led by the far-right politician Guy D’haeseleer, its float, designed to resemble a brewery, had a poster reading “Superior White Beer.” A participant, colorfully clothed and wearing blackface, handed out chocolate mousse to cheering spectators.

Alongside other forms of anti-Semitism, largely linked to Israel, classic forms have re-emerged in such apolitical settings as European soccer matches, music festivals, the rap scene and cultural events like the Aalst carnival.

By Wednesday, more than 1,880 people had signed a petition on the Change.org platform to have the Aalst Carnaval removed from the UNESCO list of heritage of humanity events.

“It doesn’t scare me because it’s my reality,” Rubinfeld said. “But I do think it’s time for UNESCO to pull the Aalst Carnival from its list of heritage events. There’s an institutional problem here.”

1 Comment on "I spoke to the creators of Belgium’s anti-Semitic carnival float. They’re not sorry."