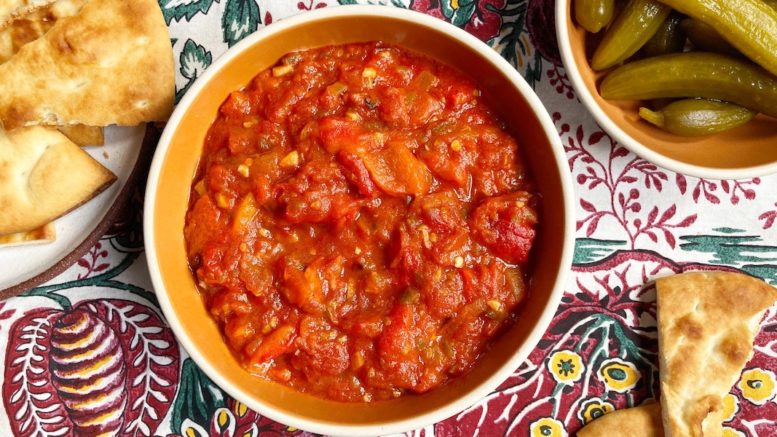 Matbucha takes serious cooking time, but nothing compares to making this recipe at home. (Sonya Sanford)

Matbucha is a Maghrebi dish made of tomatoes and peppers and means “cooked salad” in Arabic. Jewish immigrants from Morocco, Tunisia, Algeria and Libya brought matbucha with them to Israel, where it has become a staple of Israeli cuisine. Matbucha is nearly as popular as hummus, and the two are usually located right by each other at the grocery store.

Matbucha is technically a salad, but it does take serious cooking time. While store-bought versions are convenient, nothing compares to making this recipe at home.

First, roast tomatoes and peppers until they are charred with a smoky flavor, and then simmer the matbucha for over an hour until it becomes thick and luxurious. The slow simmering process can’t be rushed, as all the flavor comes from the slow-cooked tomatoes. Matbucha varies from kitchen to kitchen — some cooks add onions and/or garlic, and some prefer making it with lots of hot peppers. Adding some fresh chile pepper is traditional. In this recipe, it adds a very mild and subtle heat.

Matbucha has the consistency of a dip or spread, and it is commonly served with first-course salads (salatim) at the start of Middle Eastern and North African meals. Matbucha also makes a delicious topping for grilled meat or fish and as a sandwich spread. It can even be used as the base for shakshuka. 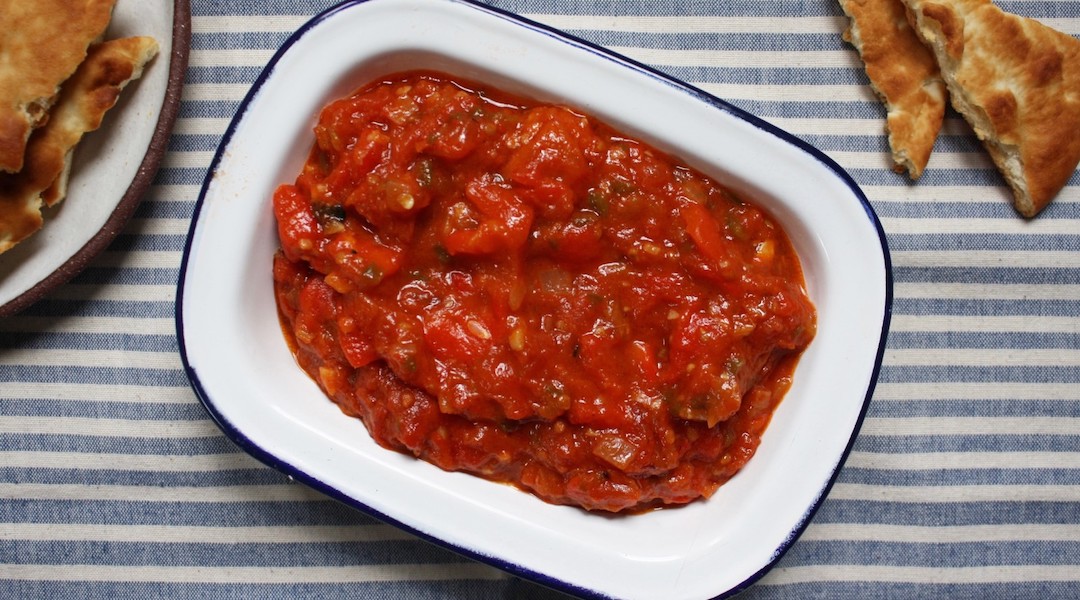 1.  Line a baking sheet with foil. Set the oven to broil (alternatively, you can char the peppers over a gas flame or grill).

4. To a medium pot on medium heat, add the olive oil, diced jalapeño, diced onion and minced garlic. Allow the mixture to cook and soften for 4-5 minutes, until the onion and garlic are aromatic but before they start turning brown. Add the peeled diced peppers and tomatoes to the mixture and bring it up to a simmer. Lower the heat and let the matbucha simmer for 90 minutes, or until most of the liquid has evaporated and the mixture significantly thickens. Stir every 10-15 minutes. Matbucha can take more or less time depending on the size of the pot you use, or the amount of liquid in the tomatoes. If the mixture still has a lot of liquid, continue to cook it for up to 2 hours.

5. Once cooked, allow the matbucha to fully cool and then refrigerate. Matbucha can be eaten right after it cools, but it tastes even better the next day. It will last up to 1 week in the fridge.

Be the first to comment on "How to make matbucha, a delicious North African tomato and pepper dip"