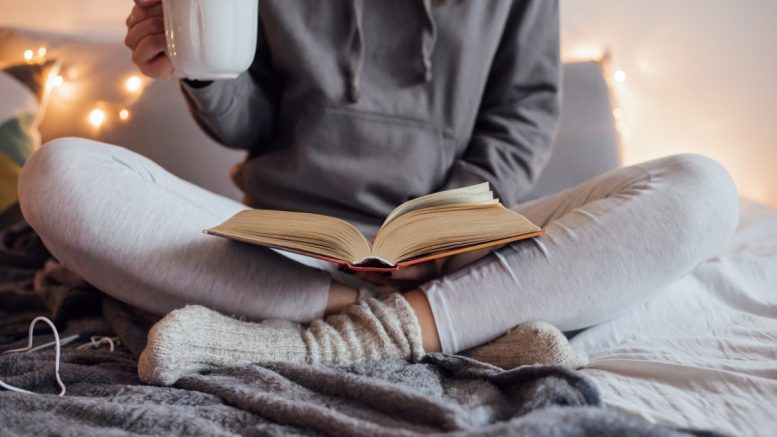 Girl holding cup of hot tea and reading in bed. Around her in bad earphones, book, smart phone. Decorative lights in background.

BY LINDA PRESSMAN (Kveller) – It’s 1968, or 1978, basically anytime I’m with my mom in her lifetime and we’re out in public. Finicky about fabrics and proper attire, my mother always offered a choice opinion in Yiddish. If they don’t speak the language, no big deal, she just mutters her criticisms to me in that tongue under her breath, criticisms so precise that they take my breath away: someone’s dress is plotzing(too tight), or it’s ongepotchked (over-ornamented), or it’s just drek (junk).

We were an immigrant family, more immigrant in spirit when the first child was born and less so with each subsequent child until, by the time there were seven of us, my parents were forced to speak English to their Yiddish-illiterate children.

Of course they tried to speak Yiddish to me but, as an American-born child of the 1960s, I wasn’t listening.

I scorned Yiddish as the Old Country language used by my parents to keep secrets from me and as the language of a million uninteresting grown-up conversations. I couldn’t imagine why I’d be interested in Yiddish.

Of course, I changed my mind later, too late, long after my brain had frozen onto English. But I discovered something amazing and colorful, something I could not live without linguistically: Yiddish adjectives and exclamations, which describe characteristics and behaviors so well.

While English flails around, always somehow missing the mark, Yiddish nails it, just as my mother demonstrated so long ago. And, interestingly enough, this ability to get things “just right” has a Yiddish term–punkt.

In honor of my mom, and her under-the-breath comments, here are seven of my favorite Yiddish words.

1. Drek – Garbage or substandard junk. You can eat something and pronounce it “drek,” or you can buy something shoddily made and declare it “drek.” This one comes in handy.

2. Potchke – fussing with, or messing with inexpertly. After being served this drek, you try to potchke it into something delicious but just end up making a mess of it. [poch-key]*

3. Goniff – The jerk who sold you the drek – literally, a thief. A person who steals you blind. A pronouncement on his soul for being a thief. [gah-niff]

4. Ongeblozen – full of him/herself, conceited. You try to get your money back from

the ongeblozen goniff for the drek he sold you when you’re unable to potchke it into something edible. [ung-eh-bluh-zen]

5. Schlmozel – You for being a hopeless dupe who got swindled by the ongeblozen goniff who sold you the drek. [Shl-mah-zle]

7. Meshuganah – crazy, insane. How you feel when you think about the ongeblozen goniff who gave you such schpilkes when he sold you the drek and made you into such a schlmozel. [mesh-u-gah-nah]

Search no more. The word exists–it’s in Yiddish.