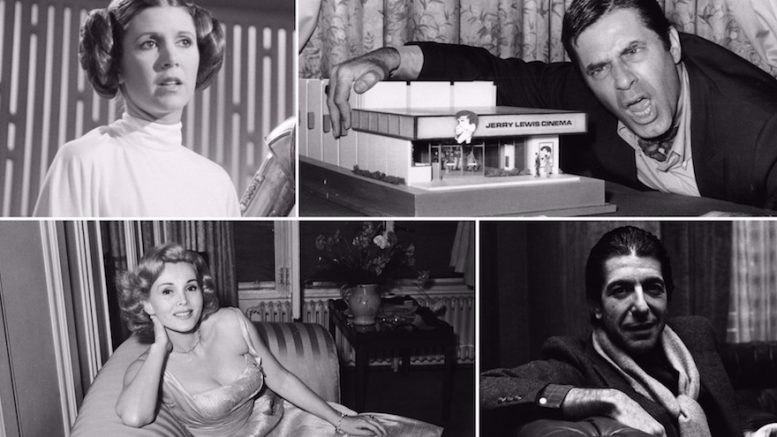 NEW YORK (JTA) — It’s always difficult to whittle down the list of influential Jews who died in a given year, but this year the task seemed to be especially tough. The number of Jews who left historic marks on their fields — and, more broadly, on Jewish culture — was remarkable.

As 5777 draws to a close, here are some members of the tribe — representing areas as diverse as pop culture to politics — we’ve mourned since last Rosh Hashanah.

Most know Carrie Fisher because of her iconic role as Princess Leia in the original “Star Wars” films, but her tumultuous career extended beyond that. The actress, who struggled with addictions to cocaine and prescription medications, also wrote four novels and three memoirs along with acting in dozens of other films. Fisher landed the “Star Wars” role as a relative unknown despite being the daughter of Jewish singer Eddie Fisher and movie star Debbie Reynolds. After she died of a heart attack in December, her only child pointed out that Fisher’s real cause of death was her substance abuse issues.

The grandson of a rabbi who grew up in an Orthodox home in Montreal became one of the most beloved folk artists of the 20th and 21st centuries. Leonard Cohen launched his musical career late, releasing his first album at 33 after writing multiple books of poetry. But he would go on to release 13 more records and often incorporate Jewish themes into his meticulously crafted songs. His song “Hallelujah” became one of the most covered and revered songs in pop music history. Just weeks before his death in November, Cohen released his final album, which included a track featuring a chorus saying “I’m ready, my Lord.”

Fewer than 70 people have been awarded France’s Grand Cross of the Legion of Honor — Simone Veil, a Holocaust survivor who became a pillar of French politics, was one of them. After making it out of Auschwitz and Bergen-Belsen, Veil became a lawyer and served as France’s minister of health and later as president of the European Parliament. She also was one of the few female members of the prestigious French Academie Francaise and spearheaded the legalization of abortion in France in the 1970s. Veil died in June, less than a month from her 90th birthday.

Don’t let the funnyman’s stage name fool you: Jerry Lewis was born Joseph Levitch to parents who performed on the Borscht Belt hotel circuit. Lewis, who died of cardiac disease in August, rose to prominence as part of a duo with Dean Martin, with whom he made over a dozen wacky comedy films from 1949 to 1956. He would go on to star in dozens of other films, including “The Nutty Professor” (yes, the original one, well before Eddie Murphy’s 1996 remake) and Martin Scorsese’s “The King of Comedy.”

Though this legendary Hollywood socialite and sex symbol was buried in a Catholic cemetery, she had Jewish roots. Born to Hungarian Jewish parents in Budapest, Sari Gabor (her real name) was married nine times and appeared in films such “Moulin Rouge” and “Lovely to Look At.” Her love life was a tumultuous public affair, and she has been called the first celebrity to be famous for being famous. Zsa Zsa Gabor died in February, less than two months from her 100th birthday.

The well-known comic nicknamed “Mr. Warmth,” who loved to hurl insults at his audience members, was also a serious actor trained at the American Academy of Dramatic Arts. He appeared in countless TV shows, performed standup into his 80s and acted alongside legends such as Clark Gable and Clint Eastwood on the silver screen. Younger audiences know him as the voice of Mr. Potato Head in the “Toy Story” series. He passed away in April from kidney failure.

Without this groundbreaking scientist, we still might not understand what 27 percent of the universe is made up of: dark matter. Rubin, an astronomer from Philadelphia, discovered that galaxies don’t rotate the way previous scientific models led us to believe, which led to the proof of the invisible, undetectable stuff that makes up nearly a third of our world. Rubin, who passed away in December, once said that science was separate from religion: “I’m Jewish, and so religion to me is a kind of moral code and a kind of history,” she said. “I try to do my science in a moral way, and I believe that ideally, science should be looked upon as something that helps us understand our role in the universe.”

After being held in North Korea for more than 17 months for allegedly tearing down a propaganda poster during a student tour, Otto Warmbier was released, comatose, in June. He did not survive the injuries — Warmbier died a week after being returned to the United States. JTA reported that he was an active member at the University of Virginia Hillel, but North Korea’s narrative said that Warmbier stole the poster for an American church. So his Jewish identity was kept under wraps so as not to embarrass North Korea during negotiations for the release of the student — “if that’s what their story is, there’s no point fighting it if your objective is to get him out,” the family spokesperson explained — who had been sentenced to 15 years of hard labor.

Among the impressive accomplishments on Ruth Gruber’s resume: a pioneering reporting stint in the Soviet Arctic, a trip ordered by President Franklin Roosevelt to comfort post-Holocaust Jewish refugees, and reportage of the Nuremberg trials and Operation Moses. The writer, who will go down as one of the 20th century’s most important journalists, Jewish or not, began her career at the New York Herald Tribune in 1947. She lived to 105.

Yes, that Heimlich — the person who invented the famous Heimlich maneuver that has saved countless numbers of choking people since its inception in 1974. Dr. Henry J. Heimlich was a thoracic surgeon born to Jewish parents in Wilmington, Delaware. Besides the famous life-saving method, he also invented the chest drainage flutter valve, known as the Heimlich valve. He died last December from complications following a heart attack.

This longtime Democratic Party activist, adviser on the Israeli-Palestinian conflict and friend of the Clintons described herself as “first a Jew, second a Democrat and above all a feminist.” Sara Ehrman may be most famous for advising Hillary Clinton not to move to Arkansas to marry Bill, though she worked on George McGovern’s 1972 presidential campaign and later advised President Clinton on Israel-Arab peacemaking. She also helped organize Bill Clinton’s first trip as president to Israel, served as AIPAC’s political director and later worked with J Street. She died in June, more than 50 years after her entree into politics.

Be the first to comment on "High Holiday Feature: 11 inspiring Jews who died in 5777"