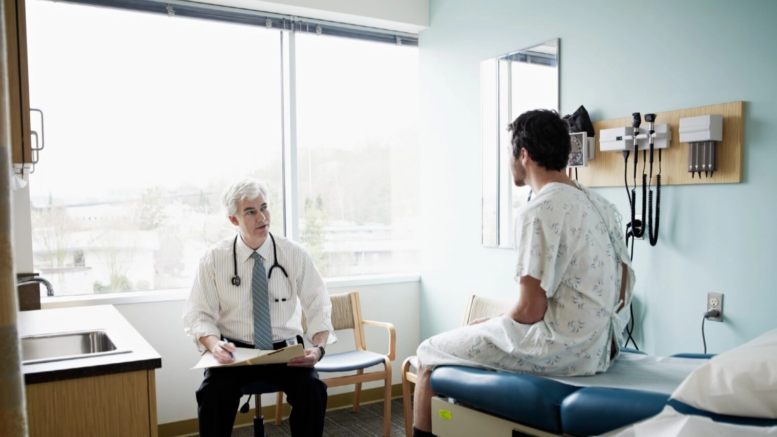 Ashkenazi men can carry harmful mutations of the BRCA gene, putting them at elevated risk not only of breast cancer, but also of melanoma and prostate, ovarian and pancreatic cancer. Yet there are precautions they can take to minimize their risks. (Thomas Barwick / Getty Images)

(JTA) – Bill Harris, a veteran Los Angeles photojournalist, didn’t think much of it when one morning in 2012 he woke up and found a tiny blood spot on the T-shirt he’d slept in. The next morning, he found blood in the same place on his chest — and went straight to his computer.

“Online, I could find only three things that would cause a man’s nipple to discharge blood: being an avid runner, which I wasn’t; having a subtropical fungus, which I didn’t; and breast cancer,” he said. “That was a pretty big shock.”

Harris, then just a few weeks shy of his 61st birthday, immediately called his doctor, who ordered a mammogram and ultrasound. They confirmed a cancerous growth in his right breast. Ten days later, a biopsy came back positive. The next month Harris got a right mastectomy, followed by the removal of his left breast half a year later.

“I walked into a woman’s imaging center and had to get into a pink paper robe,” he recalled. “All the women in the waiting room were staring at me.”

Like many other Ashkenazi men, Harris never had considered that he might have been born with a harmful mutation of the BRCA gene, which elevates the risk not only of breast cancer, but also of melanoma and prostate, ovarian and pancreatic cancer.

“Hundreds of other mutations in the BRCA gene are just as dangerous, but they’re not specific to Ashkenazim,” said Dr. Robert Sidlow, director of the Male BRCA Genetic Risk Program at New York’s Memorial Sloan Kettering Cancer Center. About 1 in 40 Ashkenazi Jews (those of Eastern European descent) carries the harmful mutation, compared to about 1 in 400 in the general population.

“The vast majority of patients I see are relatives of women who have breast or ovarian cancer and then get tested,” he said. Of BRCA mutation carriers, Sidlow added, “Most men are pretty happy to enroll in some kind of surveillance program once they get over the initial shock.”

Sidlow is on the Men’s Leadership Council at Sharsheret, the national Jewish nonprofit organization that educates the community about cancer risks and supports those with breast cancer and ovarian cancer.

Elana Silber, CEO of Sharsheret (Hebrew for “chain”), says it’s crucial that men with a family history of cancer undergo genetic counseling screening for BRCA and other hereditary cancer mutations.

Genetic testing is possible via a standard blood or saliva sample.

While Sharsheret is primarily considered a women’s organization, it has been using November — nicknamed Movember for its focus on men’s health — for an awareness campaign focused on Jewish men’s cancer risks.

“This is not only a women’s issue,” Silber said. “Family history is so important. When a man shares his family history with his doctor, he may not realize that he should mention that his mother had breast cancer or that his sister had ovarian cancer, as these are not generally ‘men’s diseases.’ They are not aware that these cancers could mean that they themselves are at increased risk for cancer and that they can pass on these mutations to the next generation – their daughters and their sons.”

If someone discovers he (or she) is a carrier of one of the genetic mutations with elevated cancer risks — not just BRCA but also such mutations as ATM, TP53, CHEK2, and PALB2 — there are various precautions they can take for themselves and their children. They can monitor their own health more closely, they can get encourage their children to test to see if they are carriers and, for any future children, take steps to prevent the mutated genes from being passed down.

For example, couples can conceive via in vitro fertilization, or IVF, and then test the embryos before implantation to ensure that only those unaffected by the genetic mutation are implanted.

While most women are aware of the risks of breast cancer, men generally are not — even though the disease strikes 2,500 men in the U.S. every year and kills about 500 of them, according to Sidlow. About 1-2% of men with the BRCA1 mutation and 6-7% of men with the BRCA2 mutation will develop cancer by age 80.

“This is why we recommend periodic mammograms starting at about age 50 for men who carry a BRCA2 mutation,” Sidlow said. “We like to educate these men on how to check their chests once a month and have a clinician do a breast checkup on them once a year.”

Since the BRCA1 and BRCA2 mutations also make prostate cancer more likely, men with either mutation should get PSA (prostate-specific antigen) levels in their blood tested annually beginning at age 40, rather than 50, the age at which screening generally begins, Sidlow said.

Sharsheret has been promoting the importance of learning one’s family history, genetic counseling and screening among both men and women. The 20-year-old organization also runs various peer support networks, offers financial assistance to cancer patients, provides mental health counseling and guidance to patients, caregivers, and their friends, and seeks to educate the broader Jewish community about cancer risks and support.

Peggy Cottrell, a certified genetic counselor at Sharsheret, said men in general are more reluctant to get regular checkups than women.

Ashkenazi Jewish men are at elevated risk not just of breast and prostate cancer but also of pancreatic cancer. Pancreatic cancer is particularly difficult because it’s tough to detect early enough and hard to treat. The five-year survival rate is only 11%. About 2% of BRCA1 carriers and 4% of BRCA2 carriers will develop pancreatic cancer, Sidlow estimated.

Even among those with elevated risks, certain behaviors can improve one’s odds, such as avoiding obesity, smoking and excessive alcohol consumption.

Harris, the California photojournalist, is still fighting at age 71. While he overcame breast cancer 10 years ago, last year he was diagnosed with ampullary cancer, a rare disease related to his BRCA2 status that was discovered thanks to his participation in a UCLA study. Surgeons have removed his gall bladder, half his pancreas and part of his small intestine, and he has had to endure eight rounds of chemotherapy.

“I’m still working through the aftereffects of the chemo. I have to eat smaller quantities than before and take enzymes to supplement my digestive processes,” Harris said.

Meanwhile, his 37-year-old son discovered that he, too, carries the BRCA2 mutation, and he had a double prophylactic mastectomy and reconstruction at age 30 — just to be on the safe side.

“If there’s any history of breast, ovarian or prostate cancer in your family, get tested genetically so that you’re informed,” Harris advised. “Diagnoses happen way too late for men, and the danger is too big.”

This article was sponsored by and produced in partnership with Sharsheret, the national Jewish breast cancer and ovarian cancer organization. This article was produced by JTA’s native content team.

Be the first to comment on "Hereditary cancers aren’t just a women’s problem. Jewish men need to take precautions too."