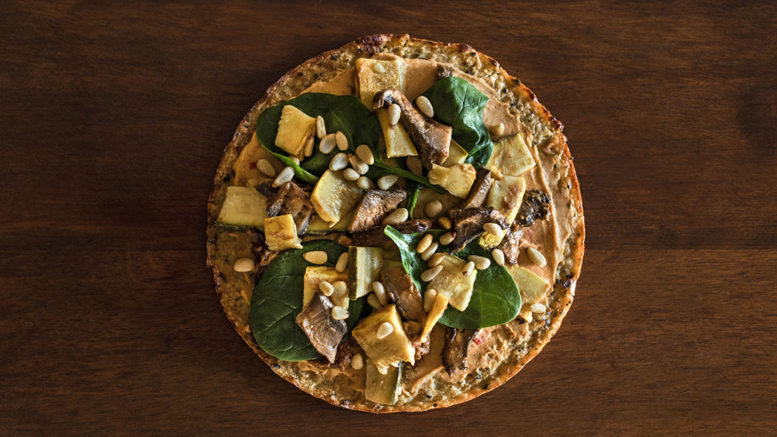 By Maddy Albert (JTA) This article originally appeared in The Nosher.

When we think of pizza, most of us think of a combination of marinara sauce, melty cheese and crispy crust. But not all pies need to include these ingredients. Enter: hummus pizza.

Yes, it exists, and it’s kind of awesome.

This innovation often includes the usual trappings of a Mediterranean veggie pizza, like olives, a rainbow of vegetables and doughy crust. But instead of adding cheese and sauce, you use hummus as a substitute. In other words, hummus pizza may look less like a traditional Italian American slice and more like an open-faced pita.

Sounds weird? Maybe. But if you’ve ever tried salad pizza or other pizza varieties that add toppings after the dough has been baked, you’ll know that great pizza can sometimes exist outside of the conventional trappings of cheese or sauce.

But not all hummus pizza is vegan. This veggie pizza recipe from allrecipes.com uses hummus only as a substitute for typical marinara sauce. While the recipe includes a sprinkling of cheese, you can always substitute vegan cheese or leave off the cheese entirely.

I’m all about Slim G’s take (@videomeals), which includes spinach and a fried egg, and looks a little like shakshuka.

Although I was initially skeptical of the idea of hummus pizza, I am starting it to see it as a beautiful example of the mix of America’s myriad food traditions. Because sharing food is so integral to sharing culture, this mix of Middle Eastern and European traditions is a perfect example of the sought after “melting pot” of American cultures. With globalization comes hummus pizza. And I’m here for it.

Be the first to comment on "Hear me out: Hummus pizza is actually delicious"