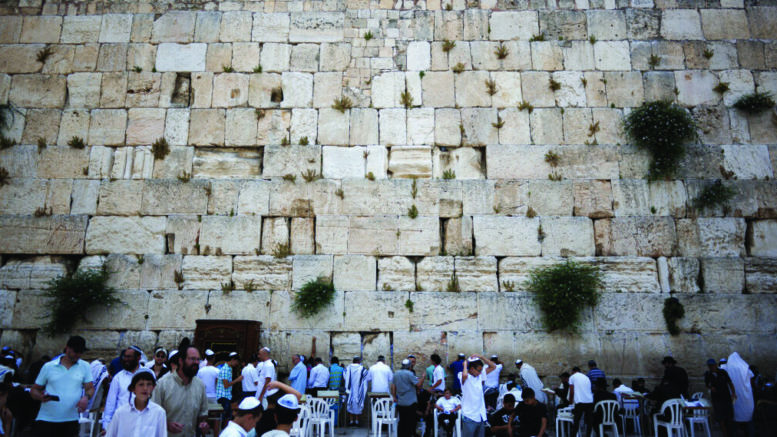 (JTA) – The video taken at the mixed-gender prayer space at Israel’s Western Wall is brief, but the incident it captured has left a lasting impact.

A group of Reform Jews at the Kotel’s egalitarian prayer space are celebrating a bar mitzvah. Dozens of haredi Orthodox men and teenage boys enter the scene and aggressively harass and intimidate the participants: shouting down the prayers, calling the gathering Jews “Nazis,” “animals” and “Christians,” and ripping up their prayer books.

As one of the boys celebrating his bar mitzvah continues with his service, a haredi boy blows his nose with pages from the prayer books.

The incident that took place last Thursday was only the latest in an ongoing series of harassment of non-Orthodox Jews by haredi men opposed to egalitarian prayer at the Wall and Israel’s other holy sites. (Just prior to the bar mitzvah disruption, the activist group Women of the Wall had been blocked from bringing a Torah into the women’s plaza, as it seeks to do monthly.)

Yet two things set it apart: its location, at the tiny, peripheral plaza that has been carved out as a safe haven for non-Orthodox Jews who want to pray in a mixed-gender setting at Judaism’s holiest site, and the crudeness captured on camera. Those details have prompted especially strong and lasting reactions — a denunciation from Israel’s prime minister and a fierce debate over whether the U.S. State Department should treat harassment of Jews by other Jews as antisemitism.

“Israel is the only Western country in which Jews don’t have freedom of worship,” Israeli Prime Minister Yair Lapid said Wednesday from Paris in response to the incident, according to Israeli media outlets.

“Let us make no mistake, had such a hateful incident — such incitement — happened in any other country, there’d be little hesitation in labeling it antisemitism,” Lipstadt wrote from the State Department antisemitism office’s official Twitter account.

Lipstadt’s role carries no authority to penalize or otherwise act in response to antisemitism abroad. But her voice carries weight in public discussions of antisemitism, allowing others to cite a top U.S. government official in making their own cases.

While Lipstadt hedged on actually labeling the Kotel incident itself antisemitic, a person familiar with her thinking told the Jewish Telegraphic Agency that the encounter fit the International Holocaust Remembrance Association’s widely adopted definition of antisemitism, which could help determine how the international community responds to it.

“It’s classic antisemitism under the IHRA definition, there’s dehumanizing, there’s Holocaust distortion — calling Jews Nazis falls under the scope of denial, denying the mechanisms and intentionality of the Holocaust,” said the person, who asked to remain anonymous to speak frankly.

“Tearing pages of a siddur and blowing your nose in it is classic. The only thing that confuses people is that Jews are doing it. The IHRA definition doesn’t say it applies only to non-Jews.”

The IHRA definition of antisemitism has been controversial because of its inclusion of some forms of anti-Israel rhetoric and activity. Its invocation in fights among Jews could open another front for debate.

Jews on both the right said Lipstadt should not wade into the Kotel dispute from her official position as antisemitism monitor.

“The Jewish people need to fix this internally, it’s our collective problem — you should focus instead on external threats,” Friedman tweeted, adding that he found the harassment at the Kotel “deeply disturbing.”

The Orthodox publication Ami Magazine also tweeted that Lipstadt’s office had “undermined the gravitas and significance” of the concept of antisemitism by using it to refer to “Jewish infighting.”

On the left, Abe Silberstein, a progressive commentator on Israel issues, told JTA that dealing with the incident as antisemitism, as opposed to “Jewish extremism,” ignored a “difficult truth.”

Since demonstrations against non-Orthodox Jews are routinely encouraged by haredi politicians and media who are opposed to egalitarianism, they require different tactics from dealing with outsiders who hate Jews, he said. (Silberstein works for a nonprofit focused on civil society in Israel but said he was speaking as an individual.)

“By invoking antisemitism, I am afraid we bolster the illusion that this is something that can be disowned without confronting it,” he said. “Calling the actions of these boys antisemitic is misidentifying the symptom while failing to diagnose the problem.”

But others believe that treating haredi harassment of non-Orthodox Jews as a form of antisemitism is appropriate and important.

“Is it antisemitic to attack Jews engaging in Jewish ritual at a Jewish holy site? When you phrase it that way, the answer is clearly yes,” David Schraub, a law professor at Lewis & Clark University who writes frequently on Jewish issues, told JTA. “The only reason why it wouldn’t be is if you think it gets some sort of exception because of who the attackers are.”

Tensions surrounding prayer at the Western Wall have long drawn attention from non-Orthodox Jews, including from outside Israel. Arie Hasit, an influential Israeli Masorti/Conservative rabbi, was present at the ceremony and posted on Facebook that he was “broken” over the Haredi youths’ treatment of the bar mitzvah group.

“Some people hate me. Who are willing to hurt me. Because my Judaism is different from their Judaism,” Hasit wrote in Hebrew.

Lapid, a longtime proponent of egalitarian prayer in Israel, condemned the harassment. “I am against all violence at the Western Wall against people who want to pray as their faith allows them,” he said. “This cannot continue.”

Lapid’s statement followed pressure from American Jewish groups, both religious and not, to take action against haredi influence in Israeli prayer spaces. Two separate letters, one from the heads of the Reform and Conservative movements and another from the heads of some of the United States’ most prominent pro-Israel Jewish groups, had called for the prime minister to respond to the harassment.

“Mr. Prime Minister, we turn to you because this situation cannot go on,” Union for Reform Judaism head Rabbi Rick Jacobs and United Synagogue of Conservative Judaism head Rabbi Jacob Blumenthal wrote in their letter to Lapid. “We represent millions of Jews who cannot tolerate such behavior, who are tired of being treated as second-class citizens at the Wall.”

Jacobs and Blumenthal called on Lapid to implement the so-called “Western Wall compromise”: a plan that would expand and make permanent the Kotel’s egalitarian prayer section, known as Ezrat Yisrael.

The agreement has languished in the Knesset for years, because it is staunchly opposed by the country’s religious right. A planned implementation earlier this year was put on hold after threats of violence. Lapid supports the plan, but his influence as a caretaker prime minister is limited until Israel holds new elections this fall (the country’s fragile ruling coalition recently dissolved, in part prompted by a different religious disagreement).

The other letter — from the Jewish Federations of North America, the World Zionist Organization, the Jewish Agency and Israel fundraising network Keren Hayesod — also called on Lapid to condemn the harassment at the Kotel.

“This is about the basic ‘derech eretz’ [consideration for others] of Israelis welcoming Jews from around the world who come to celebrate their most cherished smachot [celebrations] in the Jewish State, follow all the established rules for such an event, engage in no provocation, demonstrate nothing but ‘ahavat Yisrael’ [love of Israel], and are nevertheless subjected to conduct that should embarrass every Jew of every level or style of Jewish practice,” the letter said.

The organizations’ letter did not make specific policy demands. It stressed that the latest incident was “not about the Kotel agreement,” and did not call on Lapid to advance the plan — only to more strongly enforce a prohibition on violence at the space. (Israeli police are seen in the video holding the parties back from each other but otherwise not acting.)

But it did suggest that, on the eve of U.S. President Joe Biden’s first scheduled trip to Israel, the stakes of preventing another episode like the one that interrupted an American boy’s bar mitzvah last week are high.

“No effort to unite or strengthen the ties between Israel and the Jews of the Diaspora,” the letter said, “can be remotely successful while such behavior is allowed to continue.”