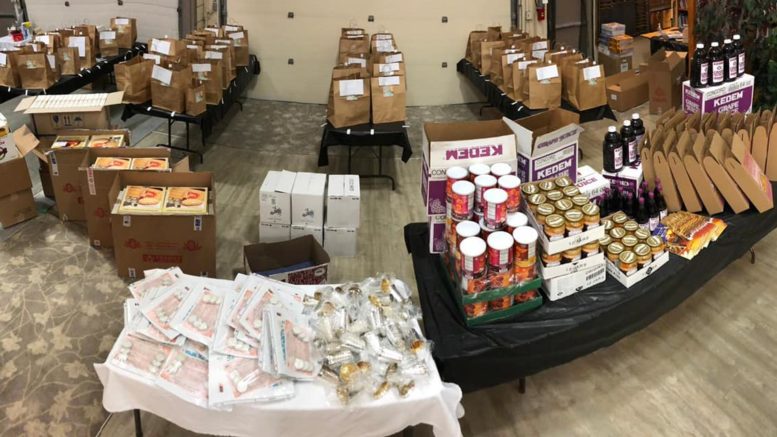 A sneak peek at Chabad Alberta in Calgary into just SOME of the seder kits, pesach meals, seder essentials & shmurah matzah - that were picked up/delivered to HUNDREDS of families, enabling an enjoyable Passover experience in each individual home.

(AJNews) – Earlier this month, Chabad Lubavitch of Alberta brought a number of issues to the attention of both the Alberta Government and Federal Government regarding Passover and Jewish law observance as it relates to Covid Reporting Requirements.

Rabbi Menachem Matusof was given assurance by both the Provincial and Federal Health Ministers that the religious observance requirements would be accommodated.

The issue is that there are several days during the holiday of Passover where use of electronic devices including phones and computers is prohibited based on Jewish law.

The dates in question are outlined as follows:

The Sabbath begins at approximately 7:40 pm on Friday March 26 during which no work or use of electronic devices is permitted.

The holiday of Passover begins Saturday evening, March 27, at sunset.

Work or use of electronic devices is not permitted during the first two days of Passover – Sunday March 28 and Monday March 29.

Work or use of electronic devices is not permitted during the last two days of Passover – Saturday April 3 (which is also the Sabbath) and Sunday April 4.

“Note that the Jewish calendar is lunar and holidays begin at sundown, the evening prior. As such travellers will only be able to welcome a visitor, but will not be able to complete the forms electronically on these specific days.”

Both the Federal and provincial governments responded to the concerns, indicating that the religious observances would be accommodated.

Alberta Minister of Health, Tyler Shandro responded, “The Emergency Operations Centre just confirmed that this has been accommodated. I have asked them to directly advise Rabbi Matusof as well. “

On March 18, the Minister Shandro’s office contacted Chabad of Alberta and confirmed that indeed they would accommodate the religious observance.

On March 20, the Federal Minister of Health also responded positively.

“Travellers who are observing Passover and are not able to access electronics for 2 days must respond to compliance verification calls and visits prior to and after the two-day period,” stated Joanna Lam, Regional Advisor, West and North, Office of the Minister of Health.

“PHAC is unable to collect information related to traveller’s’ religion. Individuals who miss a compliance verification call during which they are not able to access electronics may be subject to an in-person visit.