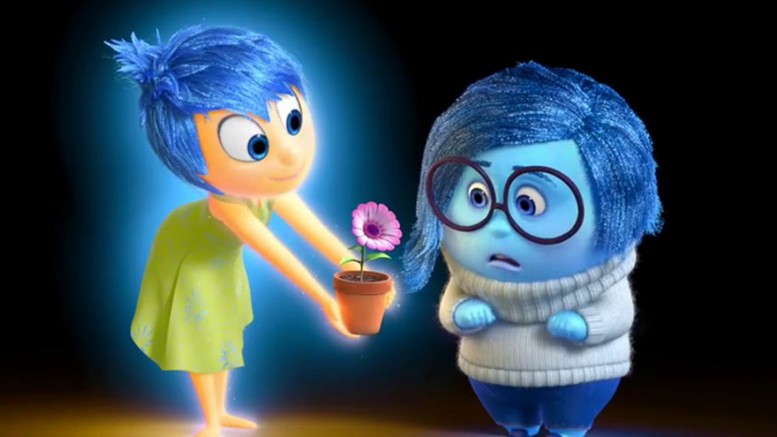 Joy and Sadness, characters from the hit Pixar film “Inside Out.” (YouTube)

LOS ANGELES (JTA) — Does the hit Pixar movie “Inside Out” hold a clue as to why many Jews find it so difficult to engage with Tisha b’Av? Could its cast of characters — Joy, Sadness, Anger, Fear and Disgust, who are anthropomorphized in the animated film — help us find a way around our reticence to engage in the inherent sadness of the day?

In the movie, these five emotions are portrayed as cute, bantering characters jockeying for control of an 11-year-old’s brain. But they may also have a something to say about our conceptions (and avoidance, even) of mourning and fasting — two of the key components of the Ninth of Av.

Tisha b’Av commemorates the day the Second Temple was destroyed, as well as many others tragedies that have befallen the Jewish people on that date throughout history. The mournful day rolls around every summer when we are otherwise engaged with tanning, summer action flicks and the ice-clinking joy of umbrella drinks. (This year it begins the evening of July 25.)

It’s summertime, and our lifestyles don’t easily acclimate to sadness. In “Inside Out,” Sadness is portrayed as a draggy, energy-sucking character — how we may see ourselves on our worst can’t-get-out-of-bed day. “If that’s the mood that Tisha b’Av is supposed to invoke, who needs it?” we may ask. (“Or find the energy to write about it?” I might add.)

But is that the kind of sadness — depression, really — this summer fast day generates? Or does the no-food, no-sex, no-leather day of Tisha b’Av, with its mournful soundtrack of Eicha (Lamentations), have the potential to turn our feelings of sadness into an act of communal engagement?

In The New York Times, professors of psychology Dacher Keltner and Paul Ekman wrote “studies find that sadness is associated with elevated physiological arousal, activating the body to respond to loss.” The psychologists, who consulted on “Inside Out,” found the Sadness character (voiced by Phyllis Smith) “frumpy and off-putting.”

“In real life,” they write, “one person’s sadness pulls other people in to comfort and help.”

But attending Tisha b’Av services last year didn’t feel that way. We sat together in a group on the floor, with only candlelight to read by, and listened to the words of the dirge. But the depressing, sluggish, blue persona of Sadness, as shown in the film, was at first pretty much like the image playing in my head.

What’s worse, my version of Sadness — perhaps a Jewish cousin of the movie character, who sounds suspiciously like Larry David — was peppered with a million questions from my other emotions about what was going on.

From Anger: Why do I have to sit on the floor? How am I supposed to read in this lousy light?

Fear: What will become of me if I don’t eat for a day? Or have sex?

Disgust, listening to the grisly detail of the terrible days in Jerusalem under the Roman siege: Can’t this be edited?

Joy, the odd emotion out on Tisha b’Av: Since everyone’s sitting in a circle, can’t we lighten the mood and break into a campfire song?

Overwhelmed, I think my Sadness could only muster: “Oy.”

But that was last year. This year, after seeing “Inside Out” and thinking on the New York Times piece, I am hoping that Sadness — so unused to taking charge in my head, especially between the blissful, fleeting weeks between Memorial Day and Labor Day — will feel empowered to step up and give the other emotions a fresh take on the proceedings.

To Anger, perhaps Sadness will respond: “Uncomfortable seating, low lights … What’s wrong with that? Don’t they put you in the mood?”

To Fear: “As for fasting, what’s a little lost protein and carbohydrates between friends? Use the heightened awareness to empathize with others who don’t have a choice about going without food.” (To the second half of Fear’s complaint — no sex — he’ll quip, “Maybe you could read a book.”)

To Disgust: “Why cut Eicha’s gruesome scenes? What’s a little ‘woe and sorrow’? Don’t you watch “True Detective” and “Game of Thrones”?

And to Joy, still itching to turn the day into a sunny one: “I think of a Tisha b’Av service as a kind of campfire, too — only without s’mores and ‘Row, Row, Row Your Boat.’ The day allows you to experience lows together as a group.”

I think my newly emboldened Sadness makes excellent points. At Tisha b’Av, sitting together, listening to our sad but poignant history poetically retold, could bring us closer together. Going without food, sex — even bathing — doesn’t have to be depressing. It can be a way of sharing a bond among members of our communities with whom we can stand when times are challenging.

Admittedly, the thought of missing a few meals still makes me feel a little bummed — but there’s always hope that another important player, Fantasy, will come to my rescue.

Edmon J. Rodman is a JTA columnist who writes on Jewish life from Los Angeles. Contact him at edmojace@gmail.com.