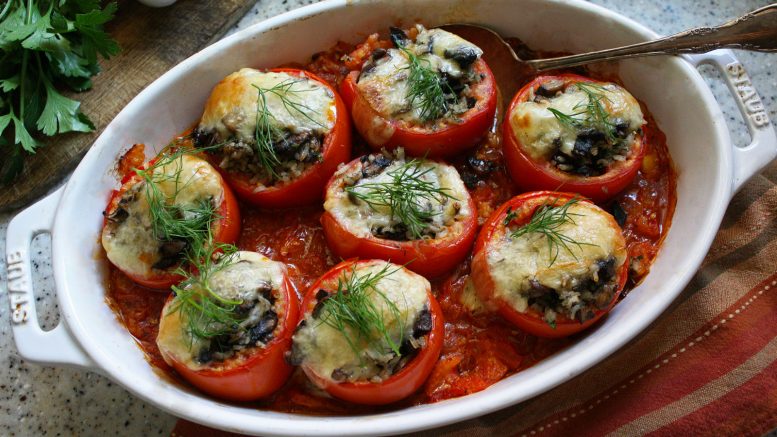 (The Nosher via JTA) — There can never be too many tomatoes. August’s heat is always made more bearable for me by peak tomato season. I love to eat them cut into thick rounds and topped on crusty well-buttered toasted bread, or chopped small in a simple Israeli salad alongside cucumber and herbs.

By this time of year, I end up with way more tomatoes from the garden and the market than I could possibly use up in sandwiches and salads alone. I’ll use the extra tomatoes to make sauce, but I also like to find a few more creative ways to take advantage of the bounty of summer.

Stuffed vegetables of all kinds were regularly made and eaten in our home, just as they are in many other Russian Jewish kitchens. Stuffed cabbage, stuffed peppers and stuffed mushrooms are regional staples.

I’ve explored and learned to cook the food of the former Soviet Union and of my family, Georgian cuisine has always stood out for its uniqueness. Georgia’s food is an intersection of cuisines from the Caucasus, Eastern Europe and the Middle East, due to Georgia’s location on the eastern edge of the Black Sea, north of Turkey, and south of Russia. Ingredients like hot peppers and Ajika (a hot sauce made out of them), fenugreek and pomegranate molasses appear in Georgian dishes alongside more familiar Eastern European staples such as beets, cabbage, dil, and mushrooms.

Georgian cuisine also benefits from its climate and terrain, which is extremely conducive to agriculture. The country is known for its wine and vast variety of food products including grains, melons, potatoes and much more.

Each region in Georgia has its own distinctive and rich cuisine. One of my favorite books on Georgian cooking is Carla Capalbo’s “Tasting Georgia, A Food And Wine Journey in the Caucasus.” Capalbo offers an encyclopedic account of Georgian cuisine filled with detailed history and delicious recipes. I especially love her recipe for stuffed tomatoes.

With her recipe as a guide, and inspired by a few other Georgian stuffed tomato recipes, over time I’ve adapted the dish to my taste and simplified some of the steps.

What makes this stuffed tomato unique is the addition of the herb fenugreek, which adds a complex and almost curry-like flavor to the tomatoes. You can find fenugreek at most Middle Eastern and Persian markets, or online. The stuffing is made of earthy garlicky sauteed mushrooms, rice, and fresh parsley and dill. The tomatoes are nestled into a simple aromatic sauce, and then each one is topped with mozzarella that gets melty and burnished in the oven.

This dish is substantial enough to be served as a vegetarian main course, but it is not too rich and could easily be served as a side dish to a heartier meal. Like any good stuffed food, these taste even better when they are reheated the next day.

Salt and pepper, to taste

4 ounces mozzarella, sliced to cover the top of the tomatoes, about 1/2-inch thick

(Sonya Sanford is a chef, food stylist and writer based out of Los Angeles.) The Nosher food blog offers a dazzling array of new and classic Jewish recipes and food news, from Europe to Yemen, from challah to shakshuka and beyond. Check it out at www.TheNosher.com.

Be the first to comment on "Georgian-Style Stuffed Tomatoes Recipe"