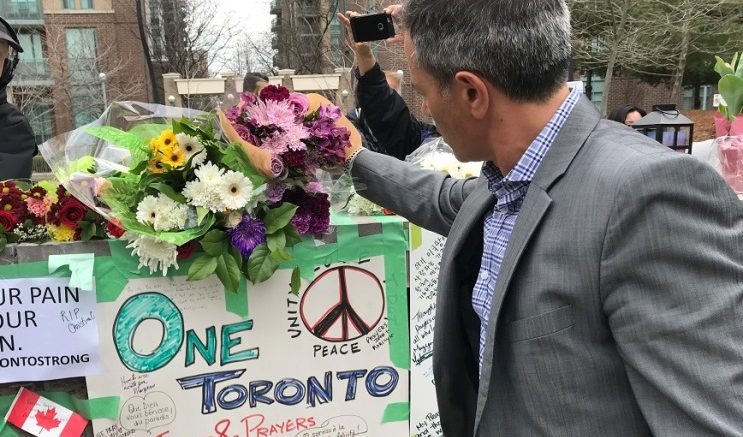 Friends of Simon Weisenthal Centre President and CEO Avi Benolo laying memorial flowers at the scene of the horrific van attack that took the lives of at least 9 people in Toronto yesterday.

TORONTO (April 24, 2018) – Today on behalf of the Jewish community and Friends of Simon Wiesenthal Center, President and CEO Avi Benlolo was at the Yonge and Finch memorial to pay respects to the victims of yesterday’s tragic incident.

“As we pay respects to the victims of this horrific incident that has affected not just the City of Toronto but all of Canada, it has been moving to see such an overwhelming amount of kindness and compassion coming from community members,” said Benlolo. “The hate that was shown by one individual yesterday is not reflective of the views and values that people in this city hold.”

Every day, FSWC works on combating hate and intolerance through educational programs such as daily workshops and the Tour for Humanity. FSWC is calling for community members to devote this week to committing acts of kindness in honour of the innocent lives lost.