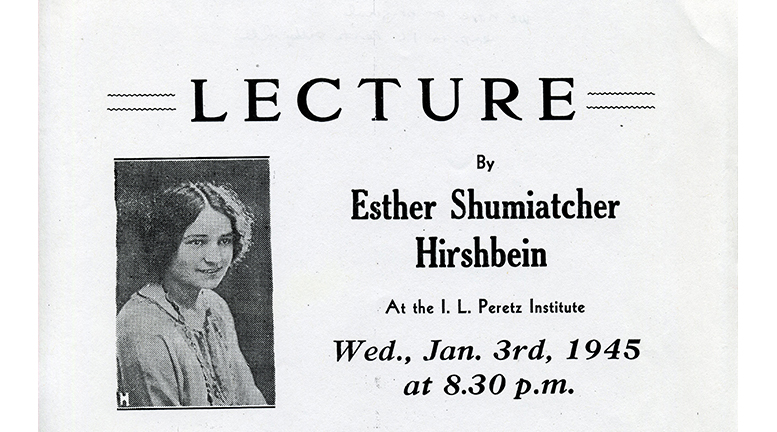 (Editor’s note – JHSSA recently had the opportunity to post recordings of “The Voice of Yiddish Calgary”, broadcast in 1994, to their website. One of few Yiddish TV shows ever produced in North America, it was the continuation of a long tradition of Yiddish cultural activity in Calgary. The following article first appeared in Discovery, The Journal of the Jewish Historical Society of Southern Alberta and it was published in June 2001.)

(Calgary, June 2001) – Two of the brightest stars in the Yiddish literary firmament have major ties to Calgary. Poet Esther Shumiatcher was raised here. 1n 1918 she met and married her husband, Yiddish writer Peretz Hirshbein, in Calgary. They lived in the city for a brief time in the early 1930s, and were frequent visitors to the Canadian west.

Esther Shumiatcher was 19 when she married Hirshbein; he was 38, and had achieved considerable fame in Europe and America as a Yiddish poet, novelist, and playwright. Born in 1899, Esther was the 4th of 11 children born to Judah and Chasa Shumiatcher in Gomel, Russia. Her father and brother Morris came to Alberta in 1908; the rest of the family, shepherded by oldest brother Abraham, joined them in Calgary in 1909. All but Abraham changed their family name to Smith.

Peretz Hirshbein was born in 1880 in what is now eastern Poland. Following a brief stint as a Yeshiva student he began writing stories in Yiddish and poems in Hebrew. In 1904 he moved to Warsaw, where such Yiddish luminaries as I.L. Peretz and Sholem Ashe encouraged him to become a dramatist. In 1906 he formed and directed an influential Yiddish drama group in Odessa, touring throughout Russia. 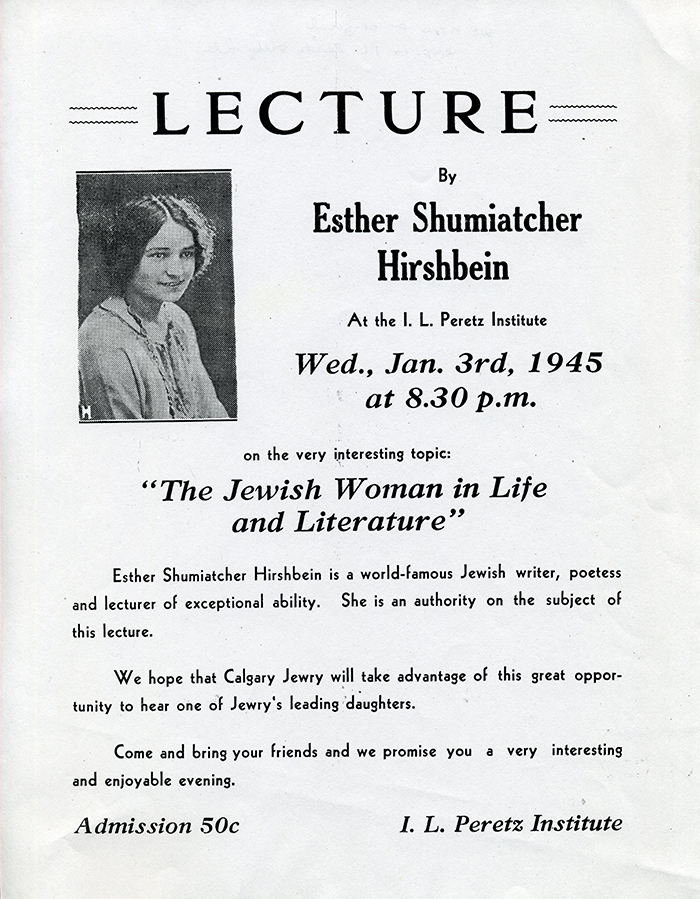 He continued his prolific writing career after reaching New York in 1911. A five-volume collection of 26 Hirshbein plays appeared in 1916. As a popular lecturer, he visited Winnipeg in 1917 and Calgary in 1918, where he was sponsored by the Jewish (Yiddish) Literary Society. Here he met Esther (neé Ethyl) Shumiatcher. They were married on December 15, 1918.

While the wedding guests were toasting the Hirshbeins in Calgary, Jewish theatre critics in New York were praising a major production of Peretz’ play, A Farvorfn Vink (A Secluded Corner). Yiddish theatre historians consider this production the start of a serious, mature phase in the genre. (Much previous Yiddish theatre had been melodramatic, star-based, and of the tear-jerker type.) The play ran for fourteen weeks, very long for the Yiddish theatre.

The couple began a two-year long world tour in 1920, travels which included visits to the South Pacific, South America, and an extended stay “in the jungles of Africa among the Zulu tribes,” as well as more conventional stops in Europe. Their travelogue was serialized in the Yiddish press and appeared as a book Arum der Veit (Around the World).

Hirshbein’s best-know Yiddish play, Grine Felder (Green Fields) was published in 1923. Soon after, he and Esther began a very long travel odyssey, spending six years in various locales such as Japan, China, and India, where they spent over a year and studied with Mahatma Gandhi. During this time, they also visited Palestine, lived in Paris for some time and stayed 15 months in the Soviet Union.

In 1930/31 they spent several months in Calgary, living at the home of Esther’s mother, Chasa Smith, at 1137 – 6th Avenue SW (family patriarch Judah had died in 1923). The writers were frequent guests and speakers at Yiddishist events in Calgary and Winnipeg. Both of Winnipeg’s Jewish papers- one Yiddish and one English, had numerous articles about their activities during this period.

Early in 1931 Grine Felder was presented in English as Green Meadows in Winnipeg by a University of Manitoba Jewish drama club. The playwright was present for opening night. In December the English version was produced in Calgary to honour Hirshbein’s 5Oth birth­ day. It starred Sarah Pravatiner, his sister, and was directed by his brother-in­ law, Abraham Pravatiner, then principal of the Peretz School.

Sarah Hirshbein Pravatiner, listed as an actress on her immigration documents, worked as a teacher at the Yiddish school. The Pravatiners lived here from September, 1930, to June, 1933, when they returned to New York.

The Hirshbeins also settled in New York, where they continued writing. Their only child, Omus, was born in 1933. In 1940 the family moved to Los Angeles. Esther was the first in her family to revert to the Shumiatcher name. Her nephew Morris Shumiatcher notes, “What kind of poet would Esther Smith be?”

Her literary career is well summarized in A Century of Yiddish Poetry: “Her first Yiddish book In the Vafley (1920) was followed by Streaks of Light five years later and Hours of Love in 1930. During that decade she published both in such non-political journals as In Zich and in the left-wing Hammer, Freiheit, and Red World among others. She also wrote critical essays … in Los Angeles her Poems (1956) appeared.”

Like many poets, she suffered relative neglect when compared to the writers of more popular literary genres. For example, the Encyclopedia Judaica devotes almost a page to the life and work of Peretz Hirshbein; Esther Shumiatcher gets 14 lines.

Peretz Hirshbein’s fortunes rose and fell with the fortunes of Yiddish theatre. In 1918 there were 24 professional Yiddish stages in the United States­ half in New York. Amateur groups flourished in Canadian Jewish centers, including Calgary. Live Yiddish drama’s decline began about 1930, with the growing popularity of radio, movies, and the assimilation of Yiddish speakers into the larger society.

Peretz Hirshbein died in 1948. at 68 years of age. Omus was just 15, and Esther struggled financially and emotionally for several years. Her brother Abraham occasionally sent her cash gifts. Their correspondence, with Esther’s notes of gratitude, are found in the A.I. Shumiatcher files at the Glenbow Alberta Archives.

Esther Shumiatcher Hirshbein visited Calgary only occasionally after Peretz’ death. Late in life she married Irving Fineman, a novelist and screenwriter. She died in 1985. Her son Omus Hirshbein, a musician, lives in New York, where he is a symphony orchestra administrator. He was the recipient of the 1997 Jewish Cultural Achievement Award in Performing Arts.

Peretz Hirshbein’s plays are still being produced. January 14, 2000 was the closing date for a three-month run of Grine Felder at New York’s Mazer Theatre. Adapted as a musical, it was presented in Yiddish with English and Russian translations available. His poem A Malach Veint (An Angel Cries). was recently set to music and recorded by the Klezmatics on a popular compact disc.

1 Comment on "From the Archives of JHSSA: Esther and Peretz Hirshbein – Calgary’s Yiddish Celebrities"