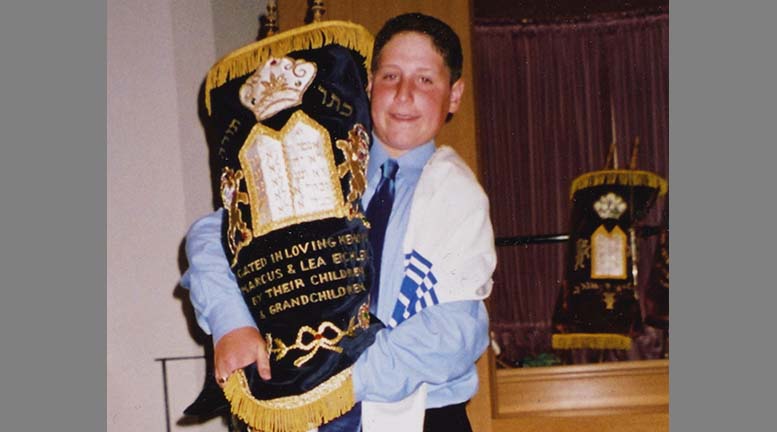 (Editor’s note: The following article was written for Discovery, The Journal of the Jewish Historical Society of Southern Alberta and it was published in May 2006. It was chosen for reprint in celebration of the Yom Tovim.)

Ida Eichler z’l displayed an embossed Torah mantle, a gift from her husband Aron Eichler’s z’l family on the occasion of the couple’s 60th birthdays. It was used to cover the “Eichler traveling Torah” during part of its long history. Ida recounted the Torah’s travels in this article which was printed in May 2006.)

The Torah scroll was purchased in 1930 by Yosef Eichler of Cieczanow (near Lvov, Poland; now Ukraine) in honour of the birth of his first grandson, Aharon the son of Morechai HaKohen Eichler.  It stayed in the local synagogue until the German invasion of Poland in 1939.

With the oncoming German onslaught and the Russians just across the river, the Eichler family decided to escape and could not take the Torah with them as they fled.  They asked the non-Jewish caretaker of the synagogue to bury it for safekeeping until their return.

The war saw the grandfather deported to the Lvov Ghetto and his fate was never known.  Aron’s family was reunited in 1945 in their hometown, having survived the camps.  They wanted to learn what was left of their home and business (a small shoe factory).  Their home was occupied by Poles who were surprised to learn that they had survived.  The factory had been severely damaged. The synagogue was destroyed.

The caretaker dug up their Torah which was somewhat damaged from the damp soil. The family was informed that there was a threat to their lives if they attempted to reclaim their business.  The parents decided to leave.  Since Aron and his brother planned to make their way to Palestine, the family was scattered among different Displaced Persons camps in 1947.  The parents went to Austria and the boys to Germany via Czechoslovakia and Austria.

Eventually, with the help of the Zionist Bricha organization, the family was reunited at the Badreichenhal DP Camp in Germany.  The parents had kept the Torah with them through all their travels. In the camp, the Torah was repaired by a sofer (scribe). In 1949 the entire family immigrated to Montreal to join an uncle there.

The Torah was housed in whichever synagogue the family attended. Since then, it has been part of every Eichler simcha, no matter where, and is referred to as the “Eichler traveling Torah.” After the passing of Mordechai Eichler, it was under the care of his daughter. When she moved to Miami, the Torah came to Aron in Calgary and it was housed in the Shaarey Tzedec and the Beth Tzedec. In 2003 it was used for Aron’s nephew’s bar mitzvah in Florida and it is now used on Shabbat regularly. There are plans for its use there for an upcoming family celebration.

Ida recounted an interesting addendum to the story of the Eichler Torah. After Aron’s father arrived in Montreal, he had difficulty finding a job in the shoemaking industry. After going from factory to factory, one receptionist informed him that while there were no openings, she was willing to take his details in case a position became available. As she spoke, the owner came out and upon seeing Mr. Eichler, told the receptionist to hire him on the spot. When she protested that there were no positions to be filled, he explained – “This is Mr. Eichler, I used to work in his factory in Poland, how can I not hire him now, when he needs help”.

For the Eichler family, this surviving remnant from their past is a living connection to their roots and to each other.

1 Comment on "From the archives of JHSSA: Eichler family Travelling Torah Scroll"