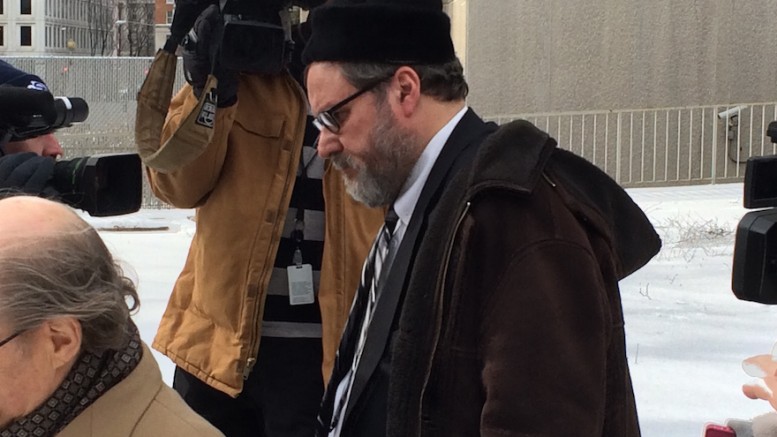 It was the rabbi’s first public statement since his arrest almost a year ago and his subsequent sentencing to 6-and-1/2 years behind bars for secretly filming women undressing in the mikvah ritual bath adjacent to his Washington synagogue, Kesher Israel.

“My preference would be to apologize individually to each person I have hurt,” Freundel wrote in his letter, which was first published in the Washington Jewish Week. “However, I recognize that reaching out to convey my regret could cause further harm to some and that such contact would be unwelcome. Therefore, I thought that the only solution would be to apologize publicly.”

Though technically only misdemeanors, Freundel’s crimes of voyeurism had unusually profound and widespread implications.

He violated the privacy of at least 150 women whom he filmed while they undressed and showered at the mikvah, including members of his Orthodox synagogue, candidates for conversion to Judaism, and students at Towson University, where Freundel taught classes on religion and ethics. The rabbi also secretly filmed a domestic violence abuse victim in a safe house he had set up for her.

Freundel’s actions tainted the sacred space of the mikvah, shook the faith of believers, undermined the authority and reputation of the rabbinate, humiliated his family and Orthodox community, and, some rabbis noted, desecrated God’s name and the Jewish people.

“It has such widespread implications, it can never be undone,” said Rabbi Mark Dratch, the executive vice president of the centrist Orthodox Rabbinical Council of America, where Freundel had been a prominent member and head of an affiliated rabbinical court.

After the Freundel scandal broke, the RCA faced questions about its oversight of member rabbis and convened a committee that recommended changes to its conversion processes, in light of reports that Freundel’s abuse of power extended to conversion candidates.

Like practically all the Jewish clergy interviewed for this story, Dratch noted that forgiveness is, first and foremost, up to Freundel’s victims — and that there is no Jewish requirement to forgive.

“Forgiveness needs to be earned. Just because a person asks does not mean that forgiveness has to be granted, even if asked many times,” Dratch said. “The teshuva [repentance] process requires not only an apology but the ability to make victims whole again.”

Dratch also suggested that in cases of sexual abuse, like Freundel’s, the act of asking for forgiveness — even if genuine — can be an affront.

“The demand for forgiveness by the perpetrator to the victim is often a second form of abuse,” said Dratch, who in 2005 founded a support network for Jewish victims of abuse called JSafe and was a member of Jewish Women International’s clergy task force on abuse.

Bethany Mandel, one of Freundel’s victims, said she had a hard time seeing Freundel’s contrition as genuine, given his actions since his arrest — including appealing his jail sentence, his refusal to vacate Kesher Israel’s rabbinic residence long after being ordered to do so and failing to own up to the full scope of his wrongdoing.

In his letter, Freundel chastised himself for being blind to the impact of his actions, but Mandel said she found the sentiments insincere.

“For him to say he was blind to the pain that his victims would feel is utterly ridiculous,” Mandel told JTA. “He got caught putting the camera in the mikvah several days after Yom Kippur last year. That Rosh Hashanah, that Yom Kippur, was really the year for him to come clean and apologize.”

She said, “Now that he’s caught, now he’s in therapy, now he’s apologizing. His actions have spoken louder than his words.”

Deborah Rosenbloom, the vice president of programming and new initiatives at Jewish Women International, called him “a longtime, serial predator who systematically abused his power to sexually exploit women” and still doesn’t seem to grasp the full impact of his abuse.

“He says he would have liked to apologize directly to the women but knows it would further upset them. What arrogance for him to think the women want to have anything to do with him,” Rosenbloom said. “And where is his apology to their families? And where is his apology to the entire community — the Kesher Israel community and the larger Jewish community? We’ve all been impacted, traumatized and are still recovering.”

Freundel’s lawyer, Jeffrey Harris, who did not return a call seeking comment, has appealed the length of Freundel’s sentence. Harris has argued that the rabbi should have been sentenced to a single 45-day term for voyeurism, not 52 consecutive 45-day terms, one for each count of voyeurism to which he pleaded guilty last February.

Freundel is being held in D.C. Jail, which is said to be a much rougher environment than federal prison. The rabbi reportedly is being held in solitary confinement after requesting it for his own safety following threats, and he reportedly underwent surgery for a health problem a couple of months ago.

According to Jewish law, while God has the power to forgive violations of religious law, sins against fellow humans can be atoned only through the forgiveness of those who suffered the offense.

Rabbi Tzvi Hersh Weinreb, a psychotherapist who is the executive vice president emeritus of the Orthodox Union, said that while it’s a mitzvah, or commandment, to forgive, it’s not required until victims receive an adequate apology, feel the perpetrator fully understands the unique nature of the pain caused and are certain the perpetrator won’t repeat his sin.

“I imagine that it is premature for most victims in this situation to fully forgive just yet, but under the guidance of a spiritual counselor or psychotherapist they should have begun the process by now,” Weinreb said of the women Freundel spied on.

Weinreb also said all rabbis are suffering the consequences of Freundel’s actions.

“All of us have been stained by his offenses and all of us are struggling to regain the trust and prestige and spiritual authority that we once had,” he said. “We must forgive, but we cannot forgive totally, unthinkingly and hastily. And we can only forgive for the offenses we have personally suffered. We cannot forgive on behalf of another victim.”

Rabbi Rick Jacobs, the president of the Union for Reform Judaism, said he was encouraged by Freundel’s apology.

“To do it publicly, it takes a kind of courage to do that,” Jacobs said. “But it in no way is the end of the process. There are so many lives that have been shattered by this. I pray for strength for him to continue on this journey. A public apology is welcome, but the deeper healing is critical.”

Be the first to comment on "Freundel apologizes for mikvah-peeping, but must Jews forgive?"