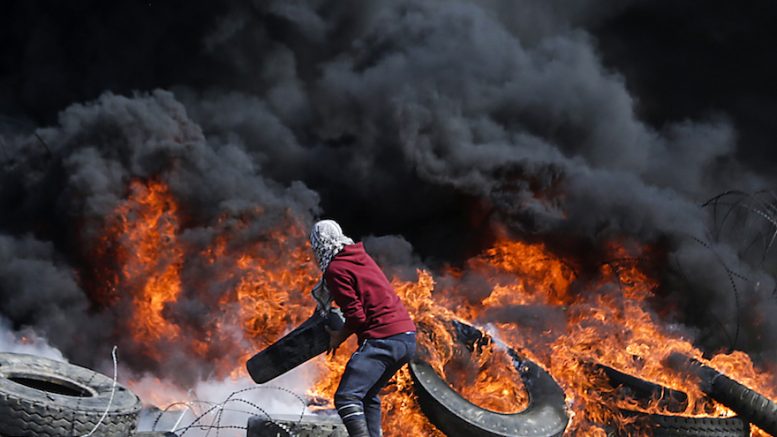 JERUSALEM (JTA) — Of the more than 60 deaths that occurred during the recent clashes between Israel and Palestinians at the Gaza border, none was as divisive as that of Layla Ghandour.

Ghandour, an 8-month-old girl, died after an uncle, himself only 12, brought her to the edge of the protest zone, where she was reported to have inhaled Israeli tear gas. Palestinians immediately raised Ghandour as a symbol of Israeli oppression, elevating the infant to the status of martyr and blaming the Israeli army for her death. Many Israelis, meanwhile, countered in angry social media posts that it was irresponsible to allow a child into what essentially was a war zone. Both Hamas and the Israel Defense Forces issued statements, even as reports filtered out that the child had suffered from a preexisting heart ailment that may have contributed to her untimely death.

Prominent newspapers such as the Los Angeles and New York Times ran long features on Ghandour, probing the circumstances surrounding her death, describing how she had become a symbol and laying out the arguments of both sides. Others, especially tabloid papers such as Great Britain’s Daily Express and The Sun, didn’t hesitate to take sides, publishing headlines such as “Drones drop lethal canisters” and describing Israeli tear gas agents as “toxic gas.”

Ghandour became a pawn in a by-now-familiar game played whenever Israel and the Palestinians clash. Flareups follow a pattern in which initial impressions — and condemnations — are replaced by a more nuanced understanding of events as more information becomes available. Next come bitter partisan battles over what actually happened. Finally, among pundits, media critics, spokespeople and social media users, the discussion shifts from what happened to the credibility of the press itself.

“I wouldn’t say that the dispute over facts disappears from the conversation after a while,” said Christian Baden, senior lecturer at Hebrew University’s Department of Communication and Journalism, “but it becomes subordinate because the main story then is about how do we need to interpret and how do we need to react to events.”

This month’s clashes were a case study in split-screen journalism — literally. On May 14, cable news channels around the world juxtaposed footage of happy, smiling Israelis celebrating the opening of the U.S. Embassy in Jerusalem with images of Palestinians running away from Israeli gunfire through the clouds of smoke.

According to Baden, such events follow a general pattern in which one or two days of confusion are followed by three to five days of interpretation, after which the “meta-debate kicks in” and “the question of what really happens on the ground becomes secondary because we are no longer debating facts, we are debating stories.”

After every development here, pro-Israel media watchdog organizations are usually among the first to wade into the debate. This wave of media criticism usually comes in response to the “knee jerk reaction” of “hold[ing] Israel responsible for whatever happens,” said Simon Plosker, managing editor of HonestReporting, whose stated mission is “defending Israel from media bias.”

Plosker blames what he sees as skewed coverage on a mix of bias, parachute journalism by inexperienced or underinformed reporters and editors abroad who approach the conflict with “a certain level of preconceived framing” already in mind. Plosker said the narrative presenting the Gaza protesters as peaceful “was skewed from the very start.”

Experts on media ethics, however, have a slightly different take. Alan Abbey, a former journalist and adjunct professor of journalism at National University of San Diego, said real-time coverage of conflicts, even by the best reporters, is “incomplete at best, simply because details are continuing to emerge, outcomes are unclear, sources have agendas and a complete picture of a complicated situation is impossible to obtain. The coverage of the violence at the Gaza border was no different.”

Abbey, who lives in Jerusalem, said media watchdogs, on the left and right, are usually quick to “assign blame, generalize and ascribe baked-in, conspiratorial bias where none may exist.” He added that a “laser-like focus on individual headlines or even stories misses the sweep and breadth of a news organization’s ongoing coverage of people, places and events,” which taken together give a more accurate picture of an outlet’s approach.

Baden agreed, noting that there is a “perceptual bias” in how we read the news. Dubbed the “hostile media phenomenon” by researchers, this bias manifests itself in how news consumers view reportage of divergent viewpoints. Baden explained that people tend to equate reporting of their opponents’ positions with an endorsement of those positions.

One foreign correspondent who covered the clashes from the Gaza side of the fence and asked to remain anonymous agreed, telling JTA that he thought that many people follow news coverage in search of reinforcement of their preconceived viewpoints. His role, as he sees it, is to do his “best to be a witness on the ground, to explain what I see, to explain what I don’t see, to try to present the different perspectives.”

“I’ll often see parts of my reporting weaponized by different sides, taken out of context, or parts of a story will be quoted to support a narrative or to make an accusation of bias,” this correspondent said. “I can’t help that, but I really try to keep the white noise in the background.

“It’s not about my opinion. I see my role as trying to gather as many reports and facts and people’s sentiments and present them, and I think my audience is smart enough to read it and draw their own conclusions.”

While Hamas did want journalists to tell the story of a tragic clash between peaceful protesters and trigger-happy soldiers, the reality on the ground was more complicated than that simple narrative, the correspondent said, noting that participants had a range of motivations for joining the protests.

“The situation is always more complicated … and that’s the value of having someone on the ground,” he said. “I’d like people to know that journalists in Gaza are working their asses off. It doesn’t just come to you. It takes many hours and interviews and double checking. I’m always thinking ‘how can I explain about this with all its complexity to people who just want to know and aren’t just trying to seek confirmation of their own opinions?’ I’ve been very impressed with my colleagues’ coverage. You can find a lot of important nuance.”

Following the Gaza clashes, reporters asked why thousands of mostly unarmed people had been hit by live fire and if it was necessary or disproportionate. At times the IDF provided reporters with detailed breakdowns of casualties, listing their affiliations and the actions that led to their deaths, but other times reporters were brushed off.

However, the foreign correspondent said, he and many of his colleagues also were careful to cover Israel’s security concerns.

“You talk to all sides who have an interest and who are involved,” he said. “Of course, I would talk to an Israeli and also talk to a Palestinian about a conflict between Israelis and Palestinians, which is elementary.”

One flashpoint in the media war was the death of Gazan photojournalist Yaser Murtaja, who was shot while wearing a flak jacket marked “press” while photographing the clashes. The Foreign Press Association, which represents the international media in Israel, immediately issued a statement urging the IDF to “show restraint in areas where journalists are operating and to conduct a fast and open investigation into this incident.” It warned its members to exercise caution. Palestinians claimed that the photographer had been intentionally targeted.

Israel took several days to respond, when Defense Minister Avigdor Liberman told reporters that Murtaja, who sold photos to numerous international outlets, was also a member of Hamas who was using his media business as cover to obtain drone footage of IDF positions. The Washington Post, meanwhile, said that Murtaja had recently been vetted and approved for a U.S. government grant.

According to Baden, the fight over media coverage isn’t new, but the participation of the broader public in what was once an elite discourse certainly is. One of the consequences of this shift is that the views of journalists have come under increasing scrutiny, especially by those posting on social platforms such as Twitter.

One correspondent, an American based in Lebanon who likewise asked to remain anonymous, was pilloried by Israelis after a series of tweets expressing her displeasure with the death toll in Gaza. These posts, she told JTA, were held up as an example of a more generalized media bias, which she found ironic given that she is also regularly dubbed a “a Mossad spy and an Israeli stooge almost daily” for her coverage of the Lebanese militia Hezbollah.

“I firmly believe that good journalists should be able to put aside their opinions when they work, and I try my best to do so — with success, I believe. I follow all the rules I learned at Columbia Journalism School. I make sure to include a variety of perspectives in my stories and present them as objectively as possible,” this correspondent said. “But the Israeli-Palestinian conflict is not my beat, therefore I felt comfortable tweeting personal opinions on the events in Gaza knowing they would not color my coverage.”

Meanwhile, the debate over the infant Layla Ghandour goes on. Last week, Gaza’s Hamas-run Health Ministry said she had been taken off a list of Palestinians killed in the Gaza border clashes, saying they are awaiting results of a pathologist’s report.

Be the first to comment on "For reporters covering Gaza, charges of bias overshadow the stories they witness and tell"