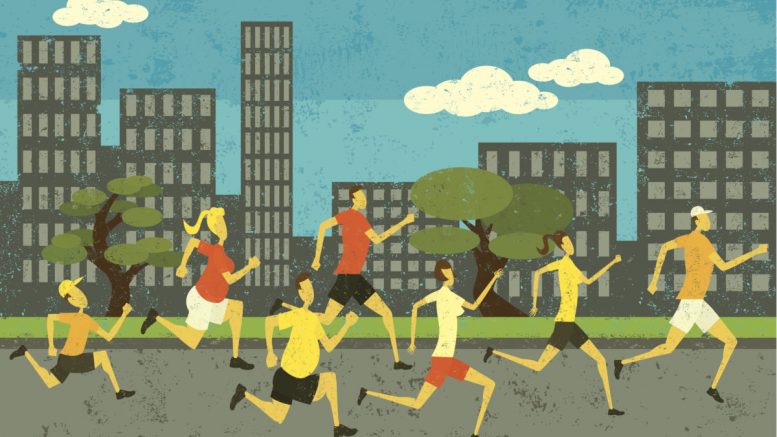 (Kveller via JTA) – When a Jewish person dies, the traditional way to grieve includes sitting shiva, a seven-day mourning period when visitors arrive to comfort and care for the bereaved. At the end of the week, the mourners “get up” and resume more of their normal activities.

Some people signify getting up by taking a walk around the block. But when I got up from shiva after my mother’s death this spring, I ran a marathon.

Let me explain. I signed up for my fourth full marathon two weeks before my mother’s diagnosis with leukemia last October. Her prognosis was grim, but we remained naively hopeful throughout her six-month hospital stay. After all, aside from the blood cancer, she was stronger and healthier than any of us.

Until her admission to the hospital, my mother, Debbie, had been a fitness instructor and personal trainer for more than 30 years. She sometimes taught four classes per day, and I practically grew up in the nursery at our local sports club in New Jersey.

A breast cancer survivor, she led the warm-up annually at our local Susan G. Komen race before breezily running the 5K. Later, when I took up running to manage my law school stress, she joined me. She began registering for 10K for the first time, and eventually ran her first half-marathon in her 50s. Her determination and high tolerance for pain served her well in running and, later, in chemotherapy.

My mom and I completed a bunch of races together, although we always ran separately. I was faster — that bothered her — and she preferred music over chitchat. Being an older runner had its benefits — she often won awards for being toward the top of her (increasingly small) age group. Just months before her diagnosis, she even placed first in her group in a 5K near her home.

I was nudged into running my first marathon about 10 years ago by Les, a coach from my hometown with Team in Training, a sports training program that raises money for the Leukemia and Lymphoma Society. Its runners benefit from coached workouts, supportive training plans and entry to popular races, which appealed to me. At the time, I was familiar with the program but didn’t personally connect with the cause.

Whenever I was in New Jersey visiting my mom, I’d run with Les and his team. On his advice, I entered the lottery for the New York City Marathon and won a spot. Training for and finishing the marathon was humbling and exciting. I still think about the perfect meal I had after the race to replenish my body with salt: a bowl of matzah ball soup and half a pastrami sandwich from the Second Avenue Deli.

One marathon was not enough for me. I’m the daughter of an endorphins junkie, after all, and I was hooked. I ran two more marathons; I had a baby in between. Then I signed up for my fourth.

Fast forward to April 29, 2018 — eight days after my mother’s death. Of course I would not have run a marathon while sitting shiva for my mother. But because the marathon was after shiva ended, and the race was local to my parents’ house, my decision seemed clear: My mom lived her life encouraging constant motion. Along with saying Kaddish and giving tzedakah (charity) in her honor, I couldn’t think of a more “on brand” way to honor her memory.

But could I actually do it? I was physically capable of running 26.2 miles; I had trained diligently. But instead of sleeping, I was staying up late, talking to my family and looking through old pictures. Rather than carefully hydrating or curating my diet for peak performance, I’d picked at deli platters and barely drank a drop. I hoped my sore throat was from talking all day rather than impending illness. And how would I manage to breathe evenly — it helps avoid cramping — if I cried a lot during the race?

I surprised myself when I blew through the first 13 miles or so. But due to a combination of my grief, exhaustion and dehydration, I faltered in the second half. At one point I actually laid in the grass and cried — not because I was tired and hurting, which I totally was, but because I felt like a weakling compared to my seemingly pain-resistant mother. My husband left to get the car.

But the resting helped. I cried into my sister-in-law’s shoulder, soaking her coat. My other sister-in-law —in her moccasins with zero arch support — walked and then jogged with me for at least a mile.

Although Les was on site coaching, I hadn’t seen him since the pre-race event the day before. He had handed me an “In Memory Of” bib from the Team in Training table to pin to my shirt and, with a hug, assured me that I could finish the race.

But with just a mile to go, Les spotted me from the sidelines. He should have been celebrating with his team at the finish, but instead he ran by my side and we picked up the pace. I was both touched and devastated to find that he also wore my mother’s name on his back, dedicating his race to her memory.

As we approached the final stretch, Les fell back. He told me that my mom was on my shoulders now, and she’d help me the rest of the way. I knew he was right. I had come so close to quitting — I felt like I had failed her at a time when I was supposed to be honoring her to lift her neshama, her soul.

Maybe to struggle so severely and then regroup was a test — a test that I was about to pass. I gasped for air between sobs and sprinted to the finish, and I knew for certain that my mom would be so proud.

Be the first to comment on "First I sat shiva for my mom. Then I ran a marathon."