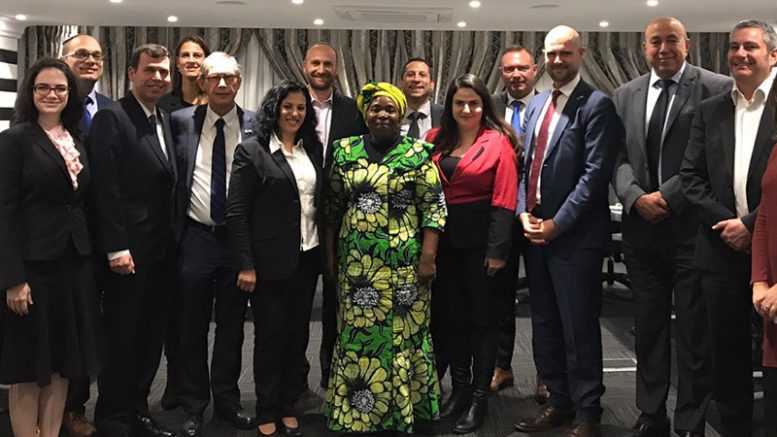 (August 24, 2017) – A delegation of Members of Knesset returned this week from a weeklong official visit to South Africa where they met with leading South African political figures and members of the  Jewish community

During their time in South Africa, the five Members of Knesset—representing both the coalition and the opposition—met with senior political figures from across the political spectrum, including former President Kgalema Motlanthe and former minister and Chairperson of the African Union Nkosazana Dlamini-Zuma, both of the ruling African National Congress (ANC) party, and Opposition Leader Mmusi Maimane and Johannesburg Mayor Herman Mashaba of the Democratic Alliance (DA). They were accompanied by Ambassador of Israel to South Africa Lior Keinan. The Israeli legislators also visited the South African parliament in Cape Town and met with counterparts from a range of parties, including the DA, the Inkatha Freedom Party, the Freedom Front Plus, the Congress of the People, and the African Christian Democratic Party.

While in Johannesburg, the lawmakers met with the leaders of the local Jewish community and with Jewish Agency representatives, as well as with families who are about to immigrate to Israel. They also visited King David High School Linksfield and met with Jewish students, youth movement leaders, and alumni of Masa Israel Journey. In Cape Town, the MKs visited the South African Jewish Museum, the Holocaust Centre, and the local Herzlia School, and celebrated Shabbat at the Cape Town Hebrew Congregation (Gardens Shul), the oldest synagogue in South Africa and one of the oldest in the Southern Hemisphere. Throughout their time in South Africa, the delegates were accompanied by representatives of the South African Jewish Board of Deputies, the South African Zionist Federation, IUA-UCF (Keren Hayesod), and the Embassy of Israel in Pretoria, who helped organize the visit.

Member of Knesset Dr. Nachman Shai (Zionist Union), who co-chairs the Knesset Caucus for Strengthening the Jewish World and led the delegation, said: “The delegation’s visit and meetings with the Jewish community dealt with the ties that bind the Jewish people worldwide, including Israel and the South African Jewish community. The community’s devotion and attachment to Israel left a deep impression on us. South African Jewry’s connection to Zionism and to Israel are the community’s hallmarks, positioning it in a place of honor among the world’s Jewish communities.”

Secretary General of The Jewish Agency for Israel, Josh Schwarcz, who accompanied the delegation, said: “This is part of The Jewish Agency’s ongoing joint initiative with the Knesset to bring dozens of MKs and Israeli government decision makers to Jewish communities worldwide. These visits are critical to strengthening the bonds with Israel and to deepening Israeli leaders’ understanding of the challenges facing the Diaspora.”

Numbering 70,000, the South African Jewish community is the largest in Africa and the tenth largest outside Israel, with the majority of Jews residing in Johannesburg and Cape Town. In recent years, Aliyah from South Africa has been steadily increasing and for the first time Israel has become the top destination for Jewish emigrants from South Africa. In 2016, The Jewish Agency opened a Project TEN center in Durban, bringing Jewish young people from Israel and around the world to volunteer with local children in the fields of informal education, sustainable agriculture, and public health.