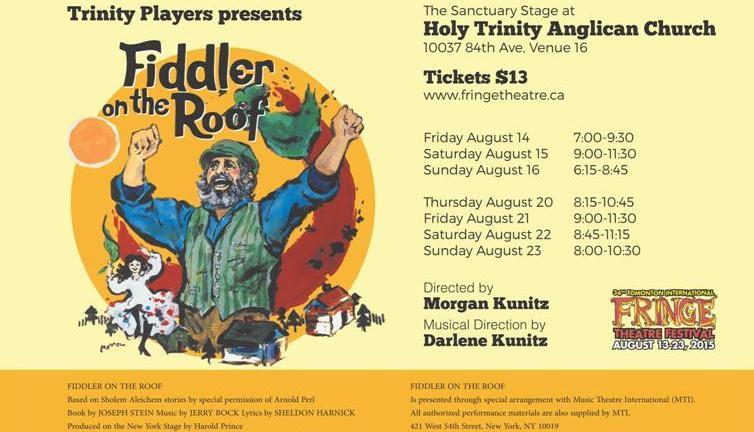 The Trinity Players will be performing "Fiddler on the Roof" as part of the Edmonton Fringe Festival this month. Don't miss this spectacular show that features Ukrainian dancers from the Edmonton Viter dance troupe and Andrew Hladyshevsky as Tevye.

Edmonton Fringe fans are in for a real treat this summer with a special performance of our favourite story – the classic and spectacular Fiddler on the Roof. It’s coming  from Holy Trinity Anglican Church and the Trinity Players and they are partnering with Ukrainian dancers from the local dance troupe Viter. It is sure to be an amazing production of this special story. A cast and crew of over 50 talented people are working together to make it happen.

We all know the classic tale: Set in the fictional village of Anatevka, the music and dance filled story centres on Tevye, a poor dairyman, and his five daughters. With the help of a colourful and tight-knit Jewish community, Tevye tries to protect his daughters and instill them with traditional values in the face of changing social mores and the growing anti-Semitism of Czarist Russia.

Rich in historical and ethnic detail, Fiddler On The Roof’s universal theme of tradition cuts across barriers of race, class, nationality and religion, leaving audiences crying tears of laughter, joy and sadness.

The show’s director is Morgan Kunitz with musical direction by Darlene Kunitz. Fiddler on the Roof has special significance for Morgan and she is thrilled to be directing the show with the Trinity Players and adding so many new faces to the cast.

“There are so many reasons we decided to mount this particular musical,” noted Morgan  “First, it echoes my ancestor’s suffering in the Ukraine and their flight from the pogroms that led them to Canada allowing me the fortune to be born in this great country.

“Second, the message of tradition colliding with family and the new generation’s struggle to create their own traditions is something that is relevant today as we see so much hate caused by what people deem to be the breaking of tradition.”

Morgan explained that her own great grandmother broke with tradition in marrying outside her Jewish faith, keeping her union secret for two years before word got out.  Her family disowned her (a difficult thing to do in a tiny prairie town) until her baby daughter fell sick and her mother said enough was enough and brought her back into the family.

Morgan knew it was “meant to be” when she met Andrew Hladyshevsky.

“We simply had the perfect Tevye,” added Morgan. “When I met Andrew Hladyshevsky  all I could think of was Fiddler on the Roof; when we found out we could obtain the rights and he was able to be our Tevye we knew it was the perfect match.”

Morgan said that “working with so many unbelievably talented people and creating a little Anatevka of our own for the months leading up to the show has been an amazing experience.  I thank my family (whom you will see all over the credits) and my husband for supporting me through all my crazy projects which I timed perfectly to the birth of each of our daughters.  I thank my Holy Trinity family and their support for our ministry to create community theatre opportunities right here in the church.  I would also like to thank our audiences and our sponsors for supporting us.”

The Trinity Players were originally founded in the early 1900s as a ministry of Holy Trinity Anglican Church.  Morgan Kunitz and Darlene Kunitz decided to resurrect the Trinity Players in 2010 by putting on small cabaret revue style shows.

“We wanted to include people with very busy schedules and of all ages making sure that everyone would get the chance to sing, by themselves, onstage,” explained Darlene.  “Our group now spans 11-70 years young and we have put on 8 cabaret shows.  We mounted a sell out run of Jesus Christ Superstar in 2013 and this is our second full scale musical.

“Doing a BIG show gives us all a chance to work with a live orchestra and a larger cast, not to mention all the extras of putting together a show to this scale.  All proceeds from the Trinity Players ministry go into the Arts at Holy Trinity ministry supporting the arts in concrete way.  We thank you for your support and look forward to seeing you in our audience.”