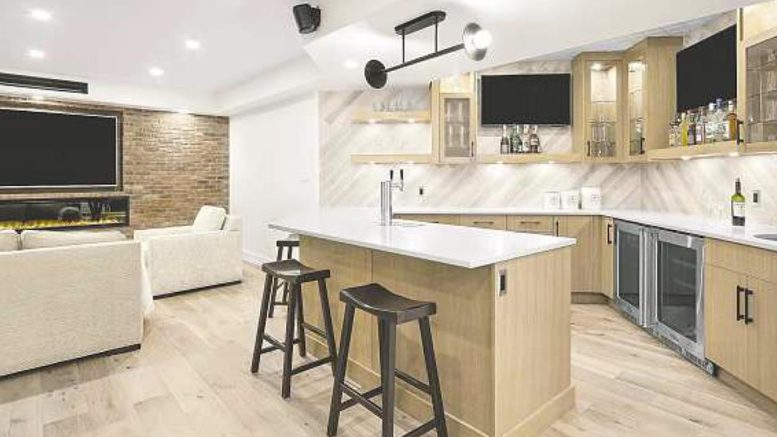 In this Summerside basement reno, Eve Rose Interiors demonstrated that a small space can have a big impact. A bar, with a kegerator and two TVs fit into a corner zone of about 80 square feet. (Photo supplied)

(Edmonton) – Don’t worry about that teenie weenie, itsy-bitsy small space. According to those in the know, small is now the new big.

“You can live small but think big,” said interior designer Eve Rose, of Eve Rose Interiors Inc., whose clients span California, Toronto, Calgary and Edmonton. “You can treat a small space with creative planning to have almost everything that you would in a bigger space.”

Given today’s economy, Rose is noticing that people are more into living within their means and opting to use whatever space they have as opposed to the old ‘bigger is better’ mentality.

“Attitudes are different,” said Rose. “People are realizing that they don’t need as much as they thought they did.” 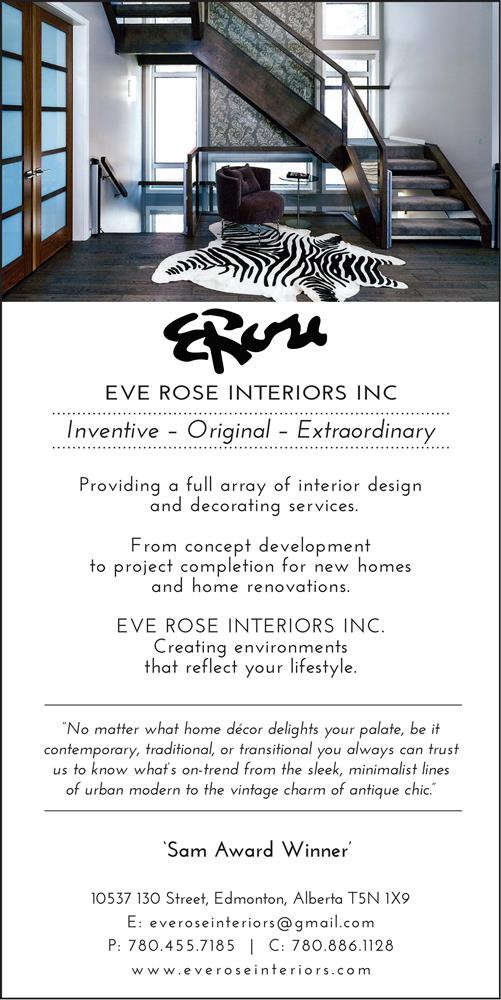 General contractor Michael Oliver, who worked with Rose on a number of projects, has also noticed that big is not what it used to be.

“People are staying where they are and making their space work or moving into a smaller space,” said Oliver, a master electrician who owns and operates Torin Electric Ltd. and subsequently expanded into general contractor operations. “We’re also finding that a lot of people in Edmonton love their spaces, they have their roots and don’t want to move.”

Those aren’t the only items factoring into the move to smaller spaces. Infills, particularly where two skinny homes replace one larger home, means small now plays a bigger role as does the growth in the condo market where space is less than in a single-family home. Then there’s the development of smaller-scale furniture and appliances emerging out of the tiny home movement.

Small is starting to have a big impact, said Rose, and she only expects that to expand in the years to come.

“Now people want rooms,” she said. “They’re going back to non-open concept because they want more privacy. It’s a trend that is coming back and this will lend itself to more smaller spaces.”

Rose, whose work includes show homes and show suites for local home builders, welcomes the small space challenge. So much so that she recently renovated a kitchen — her own — that is just 390 square feet.

Walk into the space and it is indeed undersized compared to some of today’s large kitchens with oversized islands. But it doesn’t feel small.

“We didn’t change the size,” said Rose, about the kitchen in her 1950s Westmount home. “We just changed the layout.”

The old kitchen was dark, now it’s bright. There was no storage. Now the nook where the kitchen table was still houses the table but has custom wall units behind it and includes a custom upholstered window seat. The main part of the kitchen still has an island, but with waterfall edges on both sides, it looks sleek and unobtrusive. White shaker upper cabinets, paired with flat panel lower drawers not only brighten the space but draw your eyes from top to bottom or bottom to top so that the room height seems taller. A mixture of knobs and pulls on the cabinets and drawers adds style and glamour.

The backsplash, which rises to the ceiling, is an arabesque patterned marble tile with greys, whites and rust tones that brings visual interest to the space.

“It’s still very small but it gives me the storage I need and it doesn’t feel small anymore,” said Rose, who notes that a good thing about a small space is that less material is required.

The wish list for the soon-to-be-finished basement was large. The space, not so much.

A family in Summerside wanted a guest bedroom and bathroom, an entertainment space, a fully equipped bar and an open-concept home office.

Complicating the matter was that the basement still needed space for mechanical and related items. There was a stairway to work around. Further, in-floor heating was previously installed.

Modern technology solved some of the problems, said Oliver, who teamed up with Rose to deliver what the homeowners wanted. Oliver used a thermal imaging camera attachment for his smartphone to dig up the floor to relocate plumbing without damaging anything — it had to be moved to create the proper space-saving layout.

“Newer technology gives us more flexibility in properly laying out a space,” he said, adding that the space in question, some 1,000 square feet, can definitely accommodate every need.

The bar, with a kegerator and two TVs, was fit into a corner zone of about 80 square feet and is nowhere near as small as it would seem.

“Typically, people would look at a space and say it’s not an option, but a lot of people just can’t see it,” said Oliver.

“With creative planning you can treat a small space like a large space,” said Rose, adding that lighter tones, pattern and texture all play a role in giving the final product a bigger feel.”

This article was originally published in The Edmonton Journal.

Be the first to comment on "Eve Rose Interiors: Small spaces having a big impact"