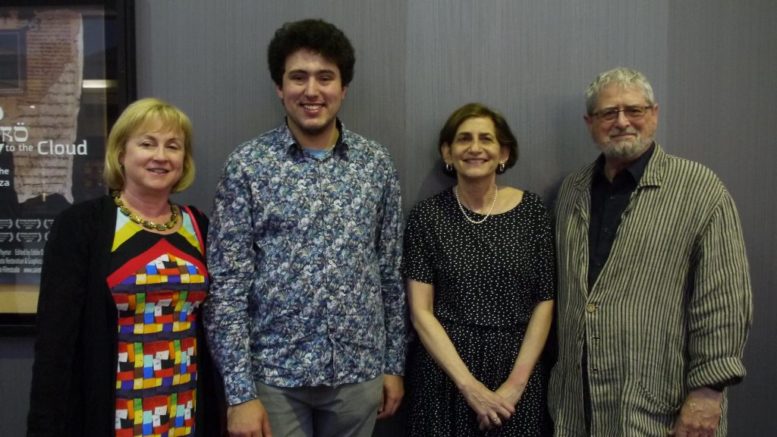 (EJNews) – Yasher Koach to Edmonton Jewish Film Festival Chair Sam Koplowicz and his talented and dedicated organizing committee for putting together an outstanding 2019 film festival. Every aspect of the festival was excellent, especially the wonderfully diverse selection of current Jewish themed films that were presented.

The EJFF, a celebration of Jewish culture, identity, religion and history through film, was held from May 21 – 30 at the Landmark Cinema 9 in Edmonton City Centre. Organized by the Jewish Federation of Edmonton, the EJFF is one of the largest and most visible Jewish cultural events in our city.

At the event’s opening night, Koplowicz said he was grateful for the experience of chairing the festival and he thanked the sponsors, advertisers and corporate supporters, working volunteers and JFed staff who all combined to make the festival possible. He especially singled out the invaluable assistance from committee members Mark Dolgoy and Esther Viragh as well as JFED CEO Debby Shoctor and Festival Coordinator Susan Schiffman.

He said, “I am most grateful to them for their hard work and dedication and very gratified to all of you in the audience for your warm reception.”

This year’s lineup featured contemporary Jewish-themed dramas, comedies, mysteries and documentaries from all over the world and guest speakers enhanced the film screenings, engaging audiences and giving everyone the opportunity to learn, to question and to gain perspective on Jewish experiences.

A lovely addition to the feature length films that were screened this year was an assortment of short films that were also screened. This gave viewers extra bang for their bucks and a bonus viewing experience as well as increasing the scope and range of the festival.

Each year, the Earl Parker Award is presented on opening night. Established in 2015 through a generous donation in memory of the late Earl Parker z’l, the award serves to promote Canadian Jewish filmmaking and increases the EJFF’s presence in the Canadian arts community.

This year the award went in a different direction. Rather than bestowing the fund on an emerging filmmaker, the award went to KlezKanada for its proposal to make a film about “Yiddish Glory, the lost songs of World War II.” KlezKanada is a world renowned Jewish cultural organization focused on Klezmir music and Yiddish culture. Its signature program is an annual summer retreat held in the Laurentian mountains outside of Montreal that celebrates Jewish and Yiddish culture. This year’s Earl Parker award will fund the making of this film with the KlezKanada retreat during the summer of 2019. The film will document “The Yiddish Glory Project.”

“Yiddish Glory” is a Grammy Award nominated Canadian Album that tells the remarkable World War II story of folklorists in the Soviet Union who risked their lives collecting songs from Jewish Red Army soldiers, Jewish refugees, victims and survivors of Ukrainian ghettos. Following the war, the researchers were arrested by Stalin; their work was confiscated, and they died thinking the collection was lost to history. But the songs were later discovered in unmarked boxes stored in the basement of the Ukrainian National Library, and brought to life through painstaking research, for the first time in 75 years.

The songs were created during the darkest chapter of European Jewish history. For some Holocaust victims, the last thing they did before being killed was writing a Yiddish song calling for revenge against fascism.  The songs detail the Holocaust as it happened, and often deal with revenge on a visceral level.

This year, at KlezKanada, participants will come together to delve into this historic treasure. They will study the archives, the song’s historical context, learn to play the repertoire and set lyrics to some of the original songs that were lost. These experiences will be captured on film, on site at the retreat. On its completion, the edited documentary will be used widely to spark interest and encourage support of this extraordinary cultural work.

The award was accepted by Edmonton Jewish Film Festival committee member Sari Schiff, who is also a seasoned participate at what she lovingly calls “Klezmir Camp.” She said, “I am delighted to accept this on behalf of KlezKanada. They provide a rich experience in culture, music, dance, food and I advise you all to try and get there. It is so much fun.”

KlezKanada sent some remarks thanking the EJFF for the award and welcoming them and the Jewish Community of Edmonton to the KlezKanada mishpocha in collaborating on this very special project.

Founded in 1996, the EJFF is the result of the hard work and talent of the volunteer Edmonton Jewish Film Festival Committee, made up of film enthusiasts and experts from throughout the community. The Committee spends each winter screening dozens of films before selecting the final film line-up for the annual Festival, which takes place each May at Landmark City Centre Cinemas.

The Jewish Federation of Edmonton is very grateful to the many generous individuals, organizations and companies who make the EJFF possible through their sponsorships and donations. Proceeds from the EJFF are the primary source of funding for Partnership 2Gether (P2G), The Jewish Federation of Edmonton’s bridge-building partnership with the communities of the Galilee panhandle in Northern Israel.