A wonderful Purim party was held at the Edmonton Jewish Seniors' Centre in February (shortly before the COVID pandemic hit Edmonton). Photo supplied.

(AJNews) – Jewish Edmonton is blessed by community professionals who elevate the organizations they serve. Often they come from within. Sometimes they come from a distance. Few have journeyed as far as Dr. Svetlana Pavlenko who this year celebrates 10 years as executive Director of the Jewish Senior Citizens’ Centre, better known as the Jewish Drop-in Centre (JDIC).

Pavlenko hails originally from Novosibirsk, Russia’s third largest city. When she and her husband Aleksey decided to immigrate to Canada, it was fortuitous that the Canadian government was promoting Edmonton. 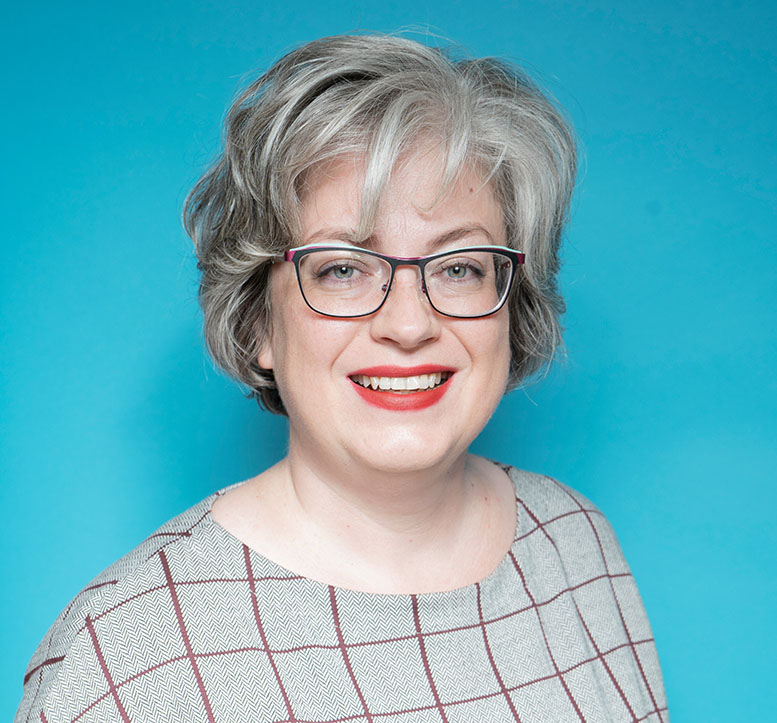 With a PhD in Philosophy from the Novosibirsk State Technical University, where she served as an Associate Professor and Chair of Student Research, Pavlenko had an impressive resume. While at school, she was recruited by the Jewish Agency for Israel; as an assistant to the Youth Shaliach, she provided programming including summer camp for youth planning to make Aliyah. She later served as regional director for the Open University of Israel, helping individuals who were planning to immigrate to Israel begin their degrees.

Those professional roles were in Pavlenko’s wheelhouse given that the main focus of her PhD had to do with social adaptation to new environments. She and her husband, Aleksey, embraced the concept in a very personal way when they decided to explore opportunities in Canada.

Pavlenko was vastly overqualified for the “survival” job that she snapped up shortly after arriving in Edmonton. She worked for a while as a receptionist at a car dealership and quickly moved into sales where she proved successful.

“But it was not the job of my dreams,” recalled Pavlenko, who creatively utilized her previous research and personal experience in pitching a program to Jewish Family Services that would help immigrant women achieve self-actualization professionally and personally in Edmonton.

JFS embraced Pavlenko’s proposed program, Transforming Acculturative Stress into Success, which led to that organization’s first-ever federal grant – and the hiring of Pavlenko as Project Manager.

“It was my first decent job in Canada,” recalls Pavlenko adding that the methodology of the innovative project was emulated by other social service agencies within and beyond Edmonton following the presentation of a paper at the International Conference of Jewish Family and Children’s Agencies in Los Angeles in 2010.

That was a big year for Pavlenko. While her program had been successful, the grant had wound down at the same time that the Jewish Senior Citizens’ Centre was seeking its first-ever full-time Executive Director.

“It was a good match for me,” recalls Pavlenko, who had enjoyed teaching seniors English as part of her role with JAFI in Russia.

Looking back, Pavlenko can hardly believe that a decade has passed since the Jewish Seniors’ Centre hired her.

The organization had already served seniors for some 58 years, headed by dedicated volunteers, operational boards and a few part-time employees including Joyce Galante and Rosemary Kitay who served respectively as JDIC administrator and program director prior to Pavlenko’s appointment.  But times were changing. The City of Edmonton was developing a framework for seniors’ centres and the JDIC board of directors was looking for someone who could bring the organization to a whole new level.

Under Pavlenko’s leadership, programming was expanded from two days a week to five. The Centre opened its doors Sundays through Thursdays, sometimes adding additional programs like Shabbat dinners and outside activities ranging from symphony concerts to pole walking.  The Shalom Club, a program instituted in 1982 to serve Jewish seniors who had emigrated from Russia, continued to thrive.

Over the years, Pavlenko has applied for numerous government grants that provided for programming and for the renovation of the JDIC – at a cost of over half a million dollars during the past decade – covering everything from furnaces to soap dispensers.

Pavlenko lauds the efforts of volunteers and community donors who also helped to make this happen through such initiatives as the “Raise the Roof” campaign spearheaded by Miriam Rabinovitch and Hal Simons, both of blessed memory.

“The community was very responsive and we were very grateful,” recalls Pavlenko.

According to former JDIC Presidents Elaine and Mark Salke, Pavlenko’s superpower is networking.

“She expanded the outreach of the Centre bringing new ideas and people,” says Mark Salke.

“Apart from her intercultural outreach, she has brought a lot of music into the Centre,” says Elaine Salke, including performances by the Alberta Opera and concerts by musicians of various genres.

“Svetlana finds people with skills and interests almost everywhere. She is able to establish connections and utilize their skills to the benefit of the Centre,” adds Salke.  “We are lucky to have her.

Two JDIC fundraising project that have been near and dear to Pavlenko’s heart are the annual Bagel Loop walk, run and roll and a 2014 fundraising cookbook that brought favourite recipes from JDIC members to kitchens throughout Edmonton and beyond based on the much-loved culinary program Cooking with Bubbie and Zaida.

Resident chef Bozena Szopiak’s iconic dill pickle soup recipe – a favourite among JDIC regulars – is featured in Traditional to Modern Cooking: An Intergenerational Cookbook, which also includes photos of JDIC members and guests and a history of the JDIC.

Food is, of course, a major draw. Prior to the COVID-19 lockdown, members enjoyed dairy vegetarian lunches at the JDIC. Due to COVID, the Centre has pivoted to takeout soups by advance order and plans are in the works to expand the menu to include entrees and desserts, Pavlenko says.

Pavlenko takes pride in an army of dedicated JDIC volunteers and talented service providers and friends like Szopiak – who has been cooking at the Centre for more than 20 years – and Ilonka Wormsbecker and Bonnie Austen who have taught exercise classes for 37 years and 13 years respectively.

“Till death do us part,” chuckles Pavlenko.

“This is not an institution.  We are a place where people are happy to be.”

Much of that atmosphere has to do with Pavlenko’s responsiveness to members’ suggestions.

This has led to everything from Ikebana (Japanese flower arranging) classes to Elders Circles facilitated on principles found in indigenous cultures.  Youth from the Kyrgyz Association of Alberta have helped JDIC members to navigate technology . . . an increasingly important skill now that COVID has forced the Centre’s activities online.

Survival to Thrival: Shared Historical Experiences – a series of lectures, discussions and activities funded in part by a government anti-racism grant – brought together Jewish and indigenous individuals for an exploration of the effects of racism and oppression on each community and how they have maintained and celebrated their cultural heritage.

“We are quite unique,” muses Pavlenko.  “We pay a lot of attention to the intellectual stimulation of our members . . . bringing guest speakers of high calibre.”

Such speakers have included former Liberal MP and Deputy Prime Minister of Canada the Honourable Anne McClellan, former Edmonton Mayor Stephen Mandel, and a number of professors from the University of Alberta.

Through the years the JDIC has initiated synergies with other local Jewish organizations.  Children from the Talmud Torah and Menorah Academy have entertained or volunteered from time to time in the lunch program.  Prior to COVID, the JDIC teamed up with Beth Shalom and Beth Israel in hosting, on a rotating basis, a community lunch following the annual Remembrance Day ceremony at the Jewish Cemetery, an event co-sponsored by the Edmonton Jewish Federation.

While the JDIC is very much a part of the Jewish community, it has also attained Pavlenko’s vision as a community hub, sharing expertise, resources and cultural enrichment with the community at large and welcoming all seniors as members regardless of faith or creed. Some 20 percent of the current membership is not Jewish – a testament to the value that friends and neighbours see in an increasingly diverse experience that, at the same time, offers a uniquely Jewish flavour.

While the risks associated with COVID have slowed down its usual hectic pace, the JDIC continues to provide a vital lifeline to its members. Pavlenko says it was the first Edmonton seniors’ centre to move live fitness classes online.  Similarly, members are currently zooming in for the Centre’s 17th Annual Learning in Retirement, a six-week education series that this year includes a guided virtual tour of New York City art museums, and talks on the history of keyboard instruments and on Jewish history,

Pavlenko longs for the day she can throw open the doors of the Centre and welcome back its members.

“People are really missing the personal connections.  It is what we are famous for,” says Pavlenko who has high praise for those members that are making a point of calling and corresponding with one another, thus breaking through the isolation caused by COVID.

JDIC President Lewis Wassel is disappointed that the pandemic has derailed a richly-deserved celebration of Svetlana Pavlenko’s 10th anniversary.

“We can’t celebrate it the way we’d like to, but we do want to recognize how successfully Svetlana has served as our director,” Wassel said. “We rely on her for everything.”

While milestones are a great time to glance at the rear view mirror, Pavlenko has both hands on the wheel and is focused on the road ahead, looking for new ways to meaningfully engage and inspire seniors.

“We want to continue breaking stereotypes. Seniors’ centres are not about bingo,” Pavlenko says, urging current members to become even more involved and potential members, especially young seniors, to give the JDIC a try.

“If you have ideas, we will try to help make them a reality.  We love to bring new programs.”

For more information about the Jewish Senior Citizens’ Centre, go to jdicseniors.ca.