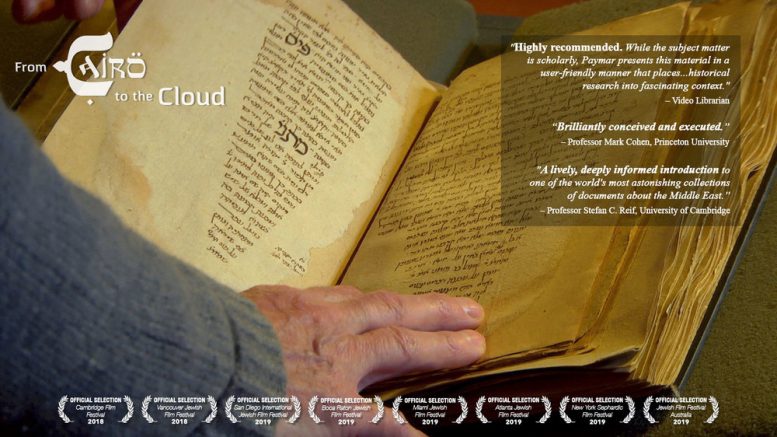 'From Cairo to the Cloud'will be screened on May 22 at the Edmonton Jewish Film Festival. Rabbi Mark Glickman, author of Sacred Treasure: The Cairo Genizah (Jewish Lights, 2011), will be in attendance.

(Edmonton) – The 2019 Edmonton Jewish Film Festival (EJFF) kicked off May 21 and runs till May 30 with 9 feature films – all screened at the Landmark Cinema 9 in Edmonton City Centre.  The EJFF is a celebration of Jewish culture, identity, religion and history, through film.  Organized by the Jewish Federation of Edmonton, the EJFF is one of the largest and most visible Jewish cultural events in our city.

The EJFF presents a variety of Jewish-themed dramas, comedies, mysteries and documentaries from all over the world.  All are high-quality films, playing in Edmonton for the first time.  Guest speakers and special events enhance the film screenings, engaging audiences and giving everyone the opportunity to learn, to question and to gain perspective on Jewish experiences.

This year’s opening film was Shoelaces, an engaging Israeli film about a father who is forced to reconnect with his adult son who has special needs. It screened to a full house audience that laughed, cried and enjoyed the journey of their new found relationship.  A light reception was held before the screening which included some casual time to schmooze and enjoy a delicious buffet of middle eastern food catered by Catering by Ed.

The film festival lineup continues until May 30 with with films such as:  From Cairo to the Cloud, Tel Aviv on Fire, The Museum, The Last Suit, Leona, The Waldheim Waltz. Between Worlds and Good, Good Words, Good Deeds: The Conductor Zubin Mehta. Click here  for the complete schedule.

Special guests will enhance the viewing of the films on two nights of EJFF. On May 22 Rabbi Mark Glickman, spiritual leader of Temple B’nai Tikvah in Calgary will attend the EJFF screening. He is the author of Sacred Treasure: The Cairo Genizah (Jewish Lights, 2011) so his perspective of the film Cairo to the Cloud will be most welcome.  On May 30, special guest Alexander Prior, Chief Conductor of the Edmonton Symphony Orchestra will attend EJFF for the screening of Good Thoughts, Good Words, Good Deeds: The Conductor Zubin Metha. Mr. Prior will speak following the film and stay for a dessert reception.

Founded in 1996, the EJFF is the result of the hard work and talent of the volunteer Edmonton Jewish Film Festival Committee, made up of film enthusiasts and experts from throughout the community. The Committee spends each winter screening dozens of films before selecting the final film line-up for the annual Festival, which takes place each May at Landmark City Centre Cinemas.

The Jewish Federation of Edmonton is very grateful to the many generous individuals, organizations and companies who make the EJFF possible through their sponsorships and donations.  Proceeds from the EJFF are the primary source of funding for Partnership 2Gether (P2G), The Jewish Federation of Edmonton’s bridge-building partnership with the communities of the Galilee panhandle in Northern Israel.

For ticket information visit jewishedmonton.org. Tickets are also available at the theatre.