(AJN) – Grab some popcorn and a pop and get comfy in your own home for the Virtual Edmonton Jewish Film Festival, from May 3 – 7, 2020.

Though the Jewish Federation of Edmonton made the difficult decision to cancel the live Edmonton Jewish Film Festival, all is not lost. They have now announced the new format and schedule. The festival is free to everyone – all you need is an email address and a computer or smart screen to participate.

“The Jewish Federation of Edmonton is pleased to bring the Virtual Edmonton Jewish Film Festival to our community and beyond – free of charge,” announced JFED Director of Development Susan Schiffman. “While we are physically apart, this is a great way to gather as a community and we are pleased to present an assortment of films that will provide diversion, entertainment and comfort in these difficult times.”

Complementing the five feature films that make up the body of the virtual festival, EJFF is showcasing a juried selection of short films from film makers around the world. These ‘shorts’ will be presented after the feature films. Exhibiting these films at the EJFF provides opportunities to see a variety of films which may not receive mass distribution, and for independent filmmakers to reach new audiences.

Guest speakers and virtual pub talks will also be added to the schedule as the date draws nearer. Stay tuned to jewishedmonton.org for film trailers, updates and to register for the Virtual Film Festival.

“Once again, the Edmonton Jewish Federation is very grateful to our dedicated sponsors, advertisers and amazing group of volunteers who are making this festival possible,” concluded Schiffman.

The schedule for the Virtual Edmonton Jewish Festival is:

Film director Guy Hodes takes his 96-year old grandmother back to Kibbutz Dalia, and to a time when she was the High Priestess of Israeli folk dancing. She observes how the kibbutz’s outdoor dance amphitheater has deteriorated and reflects upon how Israeli ideals, too, have changed; yet with slight steps, she will dance with her grandson.

Picture of His Life

Daring Israeli underwater photographer, Amos Nachoum embarks on a perilous quest to the Canadian Arctic in pursuit of his ultimate dream of swimming alongside a polar bear and capturing the encounter on film. This breathtaking, intimate portrait reveals a passionate artist who risks life and limb in pursuit of singular beauty.

Avigail is at the doctor’s office in the homestretch of her pregnancy and everything seems to be on track, yet she finds herself terrified. What follows is a wacky, day-long adventure, filled with vulnerability and humour.

After his daily workout at the gym, 70-year-old Tsvi is involved in a car accident and his family confiscates his car keys. Unwilling to give in to the loss of independence that comes with old age, Tsvi carries on with his life as before. His determination will lead him to a great new adventure!

This is the poignant and painful story of two Hungarian Holocaust survivors, a young girl and a middle-aged man, whose relationship helps them to heal and provides them with someone to live for, when all they once loved is lost. Set against the backdrop of the chilling menace of Hungary’s Stalinist regime, the film is exquisitely acted, and beautifully photographed.

A powerful silent short based on the true story of Józef Paczyński, a Polish political prisoner at Auschwitz who was the personal barber to camp commander Rudolf Höss for much of the second World War. Each time he was ordered to cut the Nazi’s hair, Paczynski feared that the haircut might be his last.

The House of Wannsee Street, Memoirs of a German Jewish Family

Poignant questions of identity and resilience are brought to life as award-winning Argentinean filmmaker Poli Martinez Kaplun confronts her mother and aunts about their hidden Jewish past. Eighty years after her family’s flight from Germany, she returns to their family house on Wannsee Street, just a few feet from the site where the Wannsee Conference decreed the Final Solution for the Jews of Europe.

The Keeper tells the incredible true story of Bert Trautmann, a German soldier and prisoner of war who, against a backdrop of British post-war protest and prejudice, is chosen as Goalkeeper for Manchester City, and goes on to become a British football icon. Though his signing causes outrage to thousands of Manchester fans, many of them Jewish, Bert receives support from an unexpected direction: Holocaust survivor Rabbi Alexander Altmann. Bert’s love for Margaret, an English-woman, carries him through, and he convinces even his harshest opponents by winning the 1956 FA Cup Final, playing with a broken neck to secure victory. But fate will soon twist the knife for Bert and Margaret, when their love and loyalty to each other is put to the ultimate test. 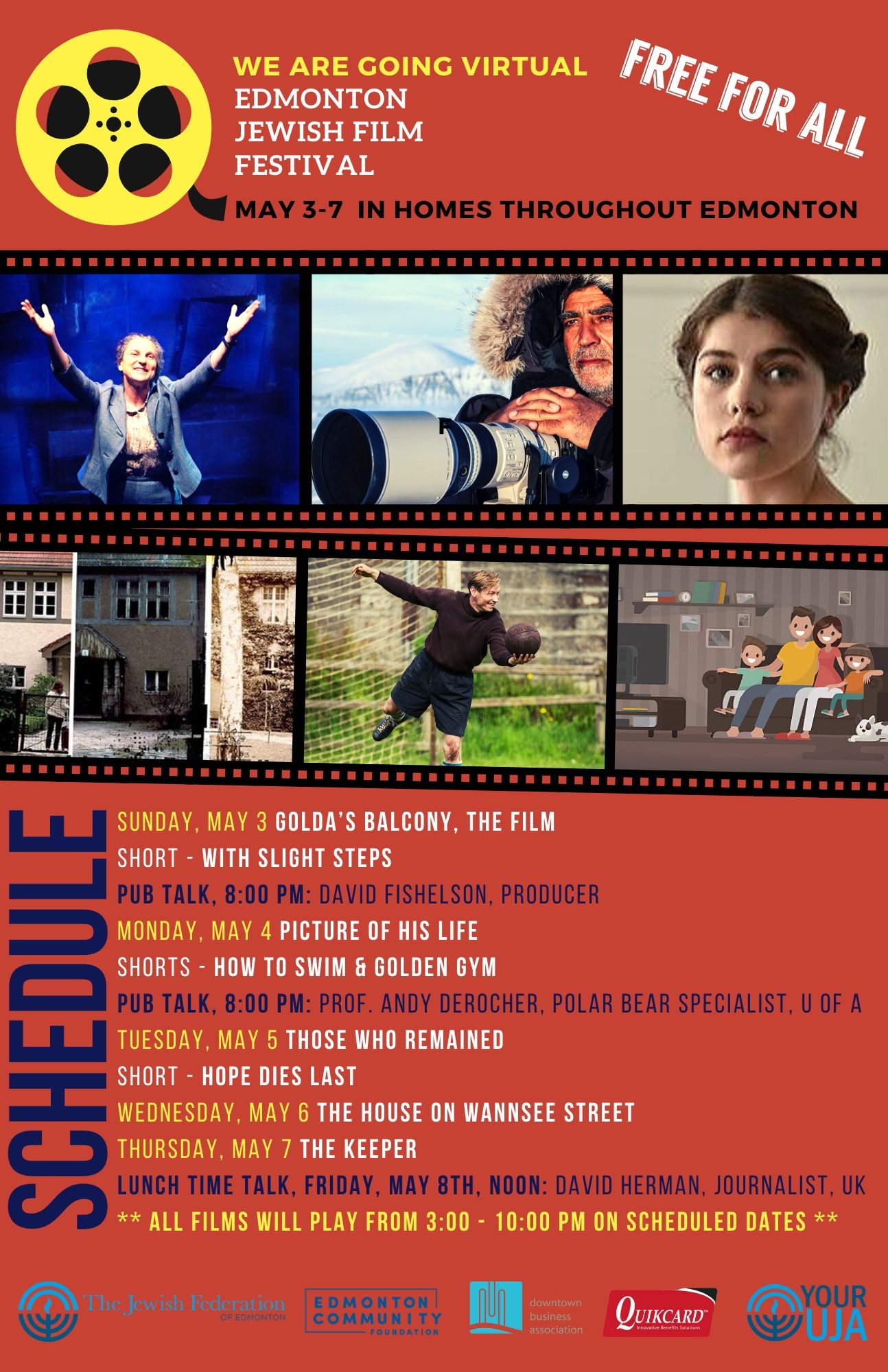 Be the first to comment on "Edmonton Jewish Film Festival goes live: May 3 -7"