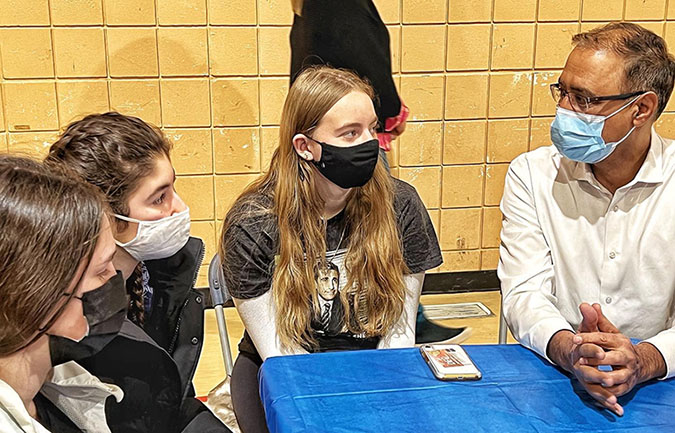 Edmonton Mayor Amajeet Sohi was among the officials who attended the Shine a Light on Antisemitism event, painted a tile and had a discussion with teens about their experiences with antisemitism. Photo by Tammy Vineberg

(AJNews) – During the month of December, the first Shine a Light on Antisemitism campaign held a multitude of awareness-raising events and projects across North America as a way to illuminate the impact of antisemitism. Microgrants offered by the Jewish Federations of North America to organizations across Canada and the United States allowed communities to participate in this campaign in unique and meaningful ways.

Edmonton’s mosaic art project brought forward stories of resilience and hope across a spectrum of ages, cultures, and lived experiences. A menorah-shaped mosaic formed from painted tiles done by community members, illustrating antisemitism’s impact on their lives, will be the resulting visual message aiming to capture these countless stories. Lewis Lavoie, a visual artist from St. Albert, has been tasked with assembling all of the pieces. The artwork will be unveiled at the Edmonton City Hall on January 12th where it will remain on display until January 31st.

Talmud Torah School, the Jewish Senior Citizens’ Centre, Hillel, and B’nai Brith Youth Organization (BBYO) received supply packages so they could contribute to this collaborative effort. An instructional video, example tiles, and prompts were also provided which Talmud Torah Principal, Sandra Marianicz, commented how it allowed even the youngest grades to participate in a meaningful way. Students helped shine a light on Antisemitism with messages of positivity and hope. Marianicz appreciated the use of the powerful story of Chanukah to champion this message. She also reflected on the pride each student had for their tile creations throughout this empowering experience.

In addition to providing supplies to local Jewish organizations to participate during the week of Chanukah, the Federation of Edmonton also held a drop-in event on December 5th for community members to create their own personal tile for the project.

Stacey Leavitt-Wright, CEO of the Jewish Federation of Edmonton, was thrilled with the turnout as it allowed a broad cross section of the community to participate. Children from six years of age to seniors 65+ got to illustrate messages of strength, hope, and peaceful interactions. Leavitt-Wright also commented how she is excited to see the final product and “the kinds of conversations we can have as a result”.

Officials, including Senator Paula Simons, MLA Lorne Dach, Mayor Amarjeet Sohi, as well as Councilors Jennifer Rice and Sarah Hamilton, attended the Westridge Community League Hall event which took place on the last day of Chanukah. They took the opportunity to sit down and chat with attendees, including a group of high school students who shared their experiences of hate, oppression, and hope. After the event, Mayor Sohi reflected on the bravery of these students in a Twitter post and how he “learned about how meaningful community and solidarity is to them as young Jewish women.” He ended his Tweet with the hashtag #ShineALight, indicating the need to continue to share these stories and create safe spaces for all.

BBYO’s regional President of Northwest Canada, Leah Campbell, was one of those students who had the opportunity to chat with some of these leaders. With antisemitism still prevalent in our community today, she expressed how glad she was to take part in this initiative and how validating it was to have “the support and participation of dignitaries in our community that listened to and empathized with the youth as we shared our experiences with antisemitism.”

Showing up and holding space for one another with open hearts is a powerful way to fight back against all forms of hatred. The mosaic art project, as part of the Shine a Light on Antisemitism campaign, demonstrated how important it is to speak up against this ongoing battle of implicit and explicit acts of antisemitism.

Even in the presence of darkness, love, faith, and community continue to bring joy to Jewish families around the world.