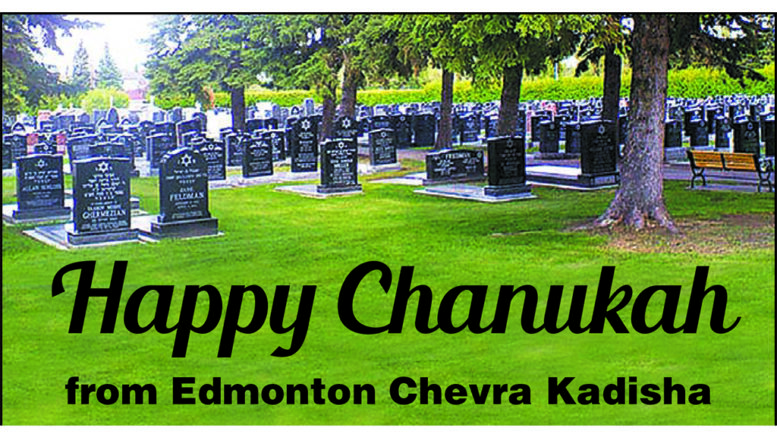 (AJNews) – This article is dedicated to the memory of Jerry Cooper, OBM, who recently passed away. An avid volunteer and former president of Chevra Kadisha, Jerry was—for many years—the compassionate and public face of the organization. May his memory always be for a blessing.

The work of the Edmonton Chevra Kadisha is seldom captured in headlines. That is because Tahara (the ritual preparation of the deceased) and Jewish burials, are carried out according to traditions that emphasize humility and anonymity.

Caring for our deceased is considered chesed shel emet—the one true act of lovingkindness because those who have passed away can never repay the mitzvah.

But the imminent opening of a second Jewish cemetery in Edmonton is major news and, perhaps counterintuitively, a source of celebration. After all, the dedication of Edmonton’s relatively small community to care for its own—dating back to the birth of the Chevra Kadisha in 1907—does not only tell a story of loss and grief; it also speaks to the rootedness of Jewish people in Edmonton and a proud history of unwavering devotion to Jewish traditions with even deeper roots.

It is no coincidence that a Jewish cemetery is traditionally referred to as Beit Chayim—a house of life. The matzevot (commonly referred to as headstones, but really monuments to the deceased) reveal much about the vibrancy of Jewish life in Edmonton. 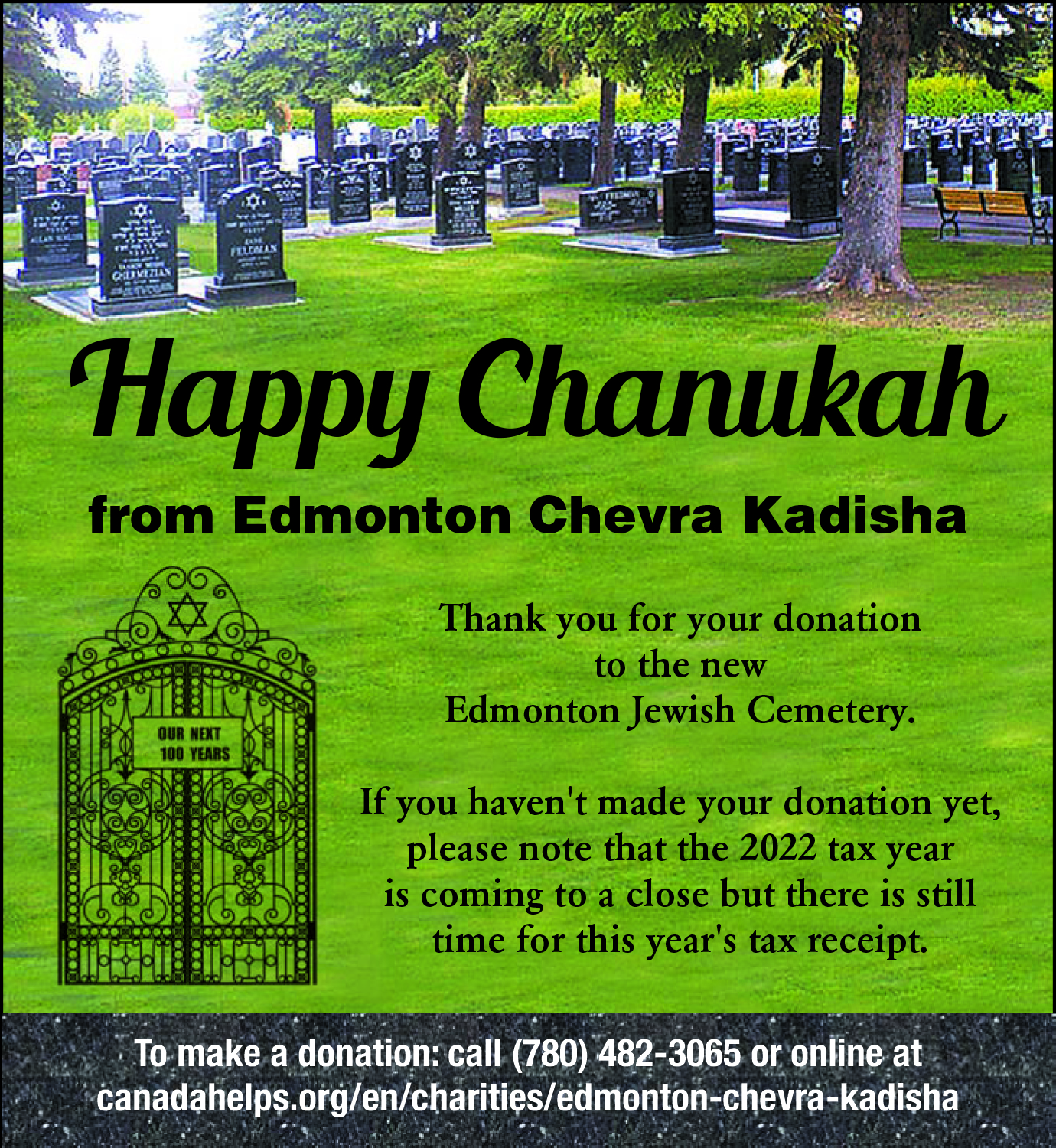 Some 115 years after the establishment of the Edmonton Chevra Kadisha (later officially incorporated in 1925), the gates of a new cemetery on 156 Street near St. Albert will open this spring (details TBA) when the land is consecrated according to time-honoured traditions so burials may commence.

“It’s like a marriage ceremony,” says Chevra Kadisha Vice President David Marcus. “Each congregation will bring out their Rabbi plus a Torah. They’ll need to circle the cemetery seven times, as at a Jewish wedding.”

Participants in the consecration—to which the entire community will be invited—will walk the perimeter of the cemetery as specific psalms are recited and charitable funds pledged to address tzorchei tzibur (the needs of the organized Jewish community as mandated by our sages).

The current Jewish cemetery on the South Side of the river, for which the land was purchased by Abraham Cristall in 1907, comprises six acres with a total of 2,200 graves, says Marcus, incoming president of the Chevra.

Long-time Chevra volunteer Bill Dolman estimates that the new cemetery, which will open in three phases (each comprising 10 acres for a total of 30), has the capacity to meet the needs of the Edmonton Jewish community for the next 200 years.

Prior to the opening of the new cemetery, Chevra leaders will be inviting all community members to attend an open house at the Chesed Shel Emet building on 105 Avenue, close to Edmonton’s downtown, early this spring (details TBA).  At that time, blueprints, conceptual drawings and detailed plans for the new cemetery will be shared and a Q and A session held.

Plans have, at times, been controversial. Some in the community had hoped that the Chevra would purchase land adjacent to the 101 Avenue cemetery and expand it so that they could eventually be buried in close proximity to loved ones already interred there.

Spaces already earmarked for family members means that funerals will continue at the 101 Avenue cemetery long after the new cemetery opens, possibly for the next 30 to 40 years, says Bill Dolman.

Although lands adjacent to the current cemetery have at times come available, they have proven unsuitable for the purposes of expanding the cemetery. Required remediation can sometimes be costly, Marcus said and, according to Dolman, available lands would have only yielded sufficient capacity for the next five to seven years.

There has also been a desire to locate a new cemetery in closer proximity to those areas with the greatest concentration of Jewish households.

Long-time Chevra leaders Shim Laskin and Shelby Smordin, both of blessed memory, played an integral role in securing the land on 156 Street during the mid-1990s.

“They were the last of that era,” said Rhoda Friedman, adding that Laskin and Smordin motivated others to move the Chevra into a new generation.

“We have a lot to be thankful for, including their wisdom and insightfulness,” Friedman added.

A Chevra member for 32 years, Friedman moved Jewish Edmonton closer to “the promised land” on 156 Street during her three-term presidency, but she is not likely to open it as president since she will be passing the baton to incoming president David Marcus come April.

Notably, even after the land on 156 Street was acquired, Chevra leaders explored other potential arrangements. At one point, they conducted preliminary discussions with the City of Edmonton and the Catholic Archdiocese around the possibility of “acquiring and/or sharing a small amount of cemetery space for our use,” recalls Bill Dolman, “but we came to the conclusion that it would be difficult for us operate under either situation.”

Among other options, purchase of land near the River Cree was once considered.
“The price was right, recalls Marcus, “but the County felt that they would lose too much in potential tax revenues that would have been generated by converting the land to acreages.”

“We did an extensive search for land in the West End and West of Edmonton,” adds Marcus.

“To have established a 10 acre cemetery would have sterilized 160 acres around the 10 acres,” Dolman told AJNews.

About a dozen years ago, Dolman—then treasurer of the Chevra— and Jerry Cooper, then president, began a detailed analysis. After three or four years, they decided to focus their energies on future development at 156 Street.

A catalyst toward action came shortly after when Chevra representatives attended a Western Canadian Cemetery Association Convention in Red Deer.

There, the provincial cemetery coordinator advised the Chevra that with their current cemetery filling up, they needed to rapidly “get their ducks in a row,” recalls Marcus.

It was estimated it would take at least 10 years of work before they could reasonably expect the first burial to take place in a new cemetery.

The Chevra engaged Marshall Hundert, a planning and land-use consultant, to help them navigate regulatory requirements and design the cemetery. Hundert—who continues in the professional role of project manager—helped Chevra leaders jump through numerous hoops, among them environmental assessments, water assessments and Alberta health regulations. The Chevra even had to apply to the Federal Department of National Defence to get a release due to restricted airspace over the cemetery. Who knew? Cemeteries attract large numbers of birds that can interfere with aircraft.

According to Bill Dolman, the current Chevra leadership is acting prudently by opening the new cemetery in phases, thus not tying the hands of future leaders.

Fencing around the new cemetery has been completed, says Marcus, as have the design and construction of roadways and sodding. The land has been graded and cemetery gates will be installed in the spring, prior to consecration.

In addition to the preparation of burial plots, future development of the first phase will be carried out over time, contingent upon fundraising. The initial construction goal was $3 million. The society remains just under $1million short of that target, Marcus says.

On the wish list is the construction of an onsite chapel and a maintenance shop; but for the foreseeable future the Chesed Shel Emet on 105 Avenue will remain the Chevra’s nerve centre. Potential future sale of the urban site—which has housed Tahara, chapel and administrative facilities since the building was opened in 1963—would go a long way toward the construction of state-of-the-art facilities at the new cemetery, Dolman says.

With an LRT station currently under construction approximately 100 metres away from the Chesed Shel Emet, Dolman believes that sooner or later a generous offer will be forthcoming, but new facilities on 156 Street will require additional fundraising, Marcus adds.

While crucial, charitable donations are not the only way to support the work of Chevra Kadisha. The beating heart of the organization is its members, the volunteers who currently number approximately 60. Of those, many have “aged out” of active participation, leaving massive responsibilities in the hands of the few.

“It’s a calling to be an active volunteer,” says Rhoda Friedman. You need to feel ready to join, and not everyone is. It takes thought to receive the calling. People know when they are ready.”

But the work of Chevra Kadisha has traditionally been carried out quietly, which has limited the ability to make the Jewish community-at-large aware of just what that calling entails.

“This is the first year we have made it public that we are looking for people,” says Friedman. “It has a lot to do with building the new cemetery and the profile that that has created.”

Chevra Kadisha membership runs the gamut of Orthodox, Conservative, Reform and unaffiliated. Some volunteers join the men’s and women’s Tahara teams. Other roles include sewing the tachrichim (shrouds) that resemble the clothing of the priests during temple times. Some volunteers are heavily invested in the various governance and fiduciary tasks. Currently active committees include the new cemetery committee and a marketing committee.

The monumental task of developing and supporting the new cemetery, while at the same time honouring the deceased and comforting the bereaved, requires broad support from Jewish Edmontonians, says Friedman.

While community members are emotionally attached to their original cemetery, Friedman wants everyone to know that the Chevra is working hard to once again create a burial site that exudes comfort, solace and the loving embrace of Edmonton’s tightly-knit Jewish community.

“A great deal of thought went into planning the cemetery. We are trying to create the same thing in the new cemetery with seating, gardens and pergolas. People can come out and think and meditate. It’s the ambience created in the old cemetery and the one we hope to create in the new one,” Friedman says.

“We hope [community members] will be as invested in the new cemetery as they are in the old one.”

After all, it takes a shtetl.

It is a tradition (though not a Jewish law) for Jews to be buried facing Jerusalem so that when Mashiach comes and the resurrection takes place, the feet of the deceased will be oriented in the right direction to begin the journey home.

For reasons that have been lost to the historic record, the graves at the 101 Street cemetery face south rather than east. Graves at the new cemetery will face east, says Chevra Kadisha President Rhoda Friedman.

To make your tax deductible charitable contribution to the Chevra Kadisha, community members can contact Treasurer Jeff Rubin by calling 780-909-3065 or make online donations at canadahelps.org/en/charities/edmonton-chevra-kadisha/. To explore the possibility of becoming a Chevra volunteer, please contact David Marcus at the above-listed number, or speak to any of the Chevra leadership cited in this article. For more information about the Chevra, go to edmontonjewishcemetery.ca.