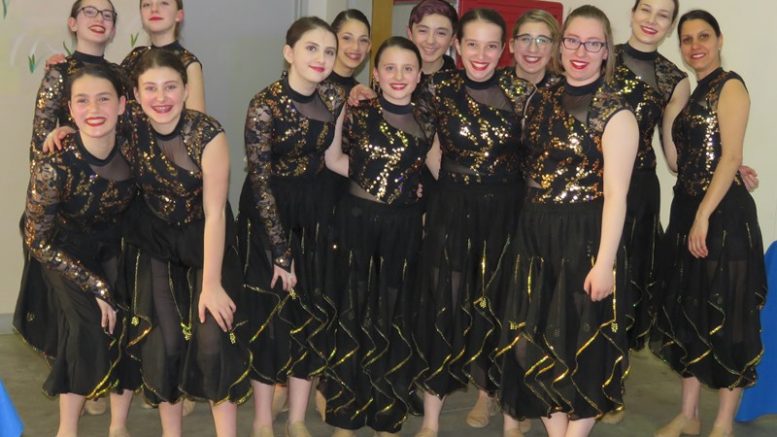 The Aviv Dancers were a highlight of the 2018 Edmonton Yom Ha'atzmaut celebration. They performed beautifully and then led the crowd in a joyful group Israeli dance party.

Revelers were welcomed at the gate with a horse drawn carriage ride to the reconstructed HB Kline’s Jewlery Store and guided to the hangar which was decorated with blue and white balloons and streamers for Yom Ha’atzmaut.

Over 350 people of all ages attended the event and there was plenty of time to schmooze with friends and family before sitting down to a delicious vegetarian Middle Eastern meal.

Jewish Federation of Edmonton sponsored the event and Temple Beth Ora congregation president Spencer Brawner emceed. Jason Kenney, UCP leader and leader of the official opposition party in Alberta was a guest speaker. He wished everyone a hearty Yom Ha’atzmaut sameach this year and for many more happy celebrations of the free, independent, and democratic Jewish homeland of Israel.

The Talmud Torah choir delightfully performed a few songs under the direction of their teacher Ben Ragosin.

Jewish Federation of Edmonton CEO Debby Shoctor then announced that as they do in Israel, it is customary at this time of year to honour volunteers and leaders in our community in a special torch lighting ceremony.   She said that this year many of the honourees would represent young leadership and volunteers and the important role they play in keeping our community vibrant now and into the future.

Following the torch ceremony, the Aviv Israeli Dancers gave a gorgeous performance of one of their new dances entitled “Rafiach.” It energized the crowd and led into a rousing group participation dance party where everyone in the room either joined in the dancing or swayed to the music clapping their hands in celebration.

Here is an excerpt of their dance performance (posted by the Aviv Israeli Folk Dance Association) and a peek at the vibrant group dance party that followed.

Kol Hakavod to Jewish Federation of Edmonton for a wonderful Yom Haatzmaut event tonight. So proud of our dancers performing Rafiach!