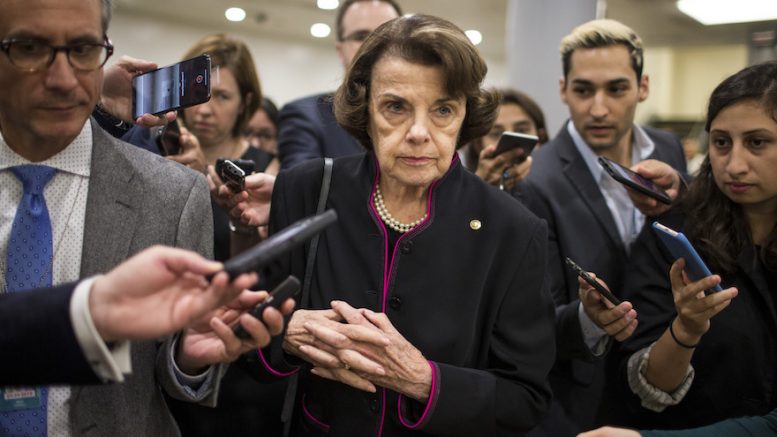 by Ben Sales
(JTA) — A quarter-century ago, a national controversy over a Supreme Court nominee’s alleged sexual misconduct triggered the wave that swept Dianne Feinstein and three other women into the Senate.

Now Feinstein is a central player in a 2018 version of the same type of scandal.

It was initially in a letter received by the California lawmaker that Christine Blasey Ford accused Judge Brett Kavanaugh of sexually assaulting her in 1982. The battle has thrown Kavanaugh’s Supreme Court nomination into turmoil and become another landmark in the #MeToo movement against sexual misconduct. Kavanaugh denies the allegations.

To Ford’s advocates, Feinstein is a hero who has drawn attention to a victim’s trauma and is holding a powerful abuser to account. Kavanaugh’s supporters see her as a villain weaponizing a deeply personal matter for partisan gain at the last moments of the Washington, D.C., appeals court judge’s confirmation process.

Feinstein’s opponent in November’s Senate election, progressive Democrat Kevin de Leon, is also criticizing her for waiting before making the allegation public. It was de Leon, a state senator, who received the party’s endorsement at its statewide convention — prior to the Kavanaugh controversy.

Amid the fraught testimonies by Ford and Kavanaugh before the Senate Judiciary Committee on Thursday, Feinstein did not hold back from defending her position.

“She reiterated that she wanted this held confidential,” Feinstein said in her opening statement at the hearing, referring to Ford’s letter. “And I held it confidential, up to a point where the witness was willing to come forward. And I think as I make my remarks, perhaps you’ll see why. Because how women are treated in the United States, with this kind of concern, is really wanting a lot of reform.”

Feinstein said later: “This is not a trial of Dr. Ford, it’s a job interview for Judge Kavanaugh. Is Brett Kavanaugh who we want on the most prestigious court in our country? Is he the best we can do?”

This is not the closing act for Feinstein, 85, who in a 1992 special election became the first Jewish woman elected to the Senate. She is running in her sixth Senate race this year and is expected to win. And 27 years after Anita Hill accused Supreme Court nominee, and now justice, Clarence Thomas of sexual assault, leading to an unprecedented number of women, including Feinstein, winning office the next year, she is still fighting those she says don’t take the issue seriously enough.

“There’s been a great deal of public discussion about the #MeToo movement today versus the Year of the Woman almost 27 years ago,” she said at Thursday’s hearing. “But while young women are standing up and saying ‘No more,’ our institutions have not progressed in how they treat women who come forward. Too often, women’s memories and credibility come under assault.”

A San Francisco native, Feinstein became mayor of that city in 1978 when George Moscone was assassinated by a former official. Supervisor Harvey Milk, the state’s first openly gay elected official, also was killed.

As mayor until 1988, governing as a relative centrist, Feinstein revitalized the city’s cable car system and oversaw its hosting of the 1984 Democratic National Convention. In 1982, she angered the city’s large gay community by vetoing a domestic partnership ordinance, calling it vague and unclear.

She won her Senate seat four years later along with fellow California Democrat Barbara Boxer, who is also Jewish. Since then, Feinstein has been re-elected comfortably four times. But this year de Leon is attacking her alongside Republicans for her handling of the Ford letter. Feinstein received the letter in late July from Rep. Anna Eshoo, a Bay Area Democrat, who had gotten it from Ford.

Feinstein, the ranking Democrat on the Judiciary Committee’s ranking Democrat, says she honored Ford’s request for confidentiality, and she did not ask Kavanaugh about the allegations in his confirmation hearings or in a private meeting. She told her Democratic colleagues about the letter only this month.

“What we have here is a failure of leadership,” said de Leon, according to the San Francisco Chronicle. He said Feinstein “pantomimed her way through [the confirmation] hearings without a single question about the content of Kavanaugh’s character.”

The Judiciary Committee’s chair, Sen. Chuck Grassley, was even harsher in his criticism of Feinstein.

“Throughout this period, we did not know about the ranking member’s secret evidence,” Grassley, R-Iowa, said at the opening of the hearing Thursday as Feinstein sat nearby, stone-faced. “Then, only at an 11th hour, on the eve of Judge Kavanaugh’s confirmation vote, did the ranking member refer the allegations to the FBI. … This is a shameful way to treat our witness, who insisted on confidentiality, and, of course, Judge Kavanaugh, who has had to address these allegations in the midst of a media circus.”

Feinstein, through a spokesman, has said that she explored with the Ethics Committee ways to investigate an accusation by an unnamed individual. The spokesman said they were advised that Republican senators would have had to approve such a request, violating Ford’s request that she not be named.

On Friday, as half of the Democratic members of the Senate Judiciary Committee walked out of a meeting in which Republicans decided along party lines to schedule a vote on Kavanaugh, Feinstein stayed put and called this moment a test of whether the country has learned from the 1991 controversy that led her to the Senate.

“I hoped we would do better and show women that our country, our committee, has in fact changed,” she said in the Judiciary Committee. “The entire country is watching now how we handle these serious allegations. It is in fact a real test for the United States Senate and for our country, to see how we treat women, especially women who are survivors of sexual assault. I believe we can do better and I hope we are better.”

Be the first to comment on "Dianne Feinstein was elected in the wake of one Supreme Court controversy. Now she’s front and center in the Kavanaugh turmoil."