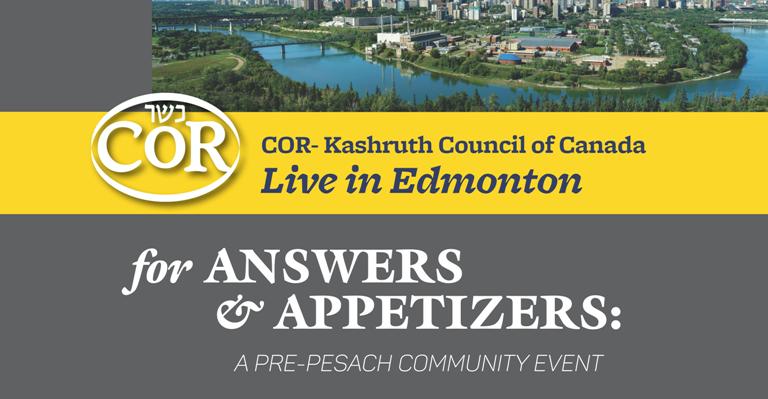 COR-Kashruth Council of Canada will be in Edmonton on April 3 for a special presentation on kashruth and Passover.

(EJNews) – Survey a hundred Jews as to what comes to mind when they think about Passover and the most common response is probably: food, or more specifically, kosher for Passover food. Many people have memories of their mothers or grandmothers cooking and baking Passover delights from scratch in their kitchens long before the onset of the holiday. 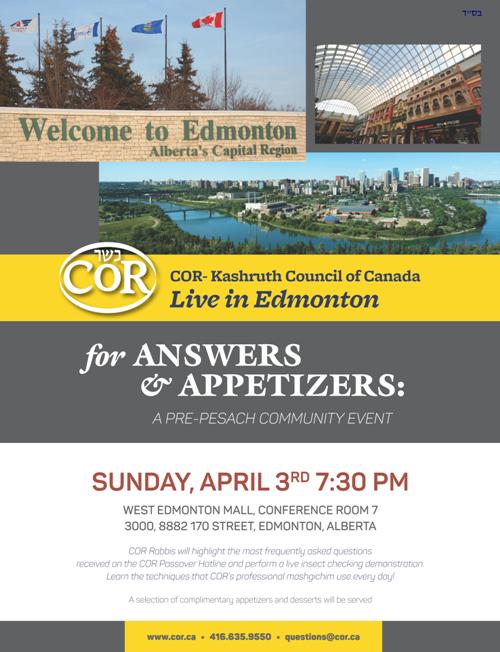 Today that tradition continues, although we also rely more on store bought products. But what exactly can be purchased for Passover from the grocery store? Does everything require specific kosher for Passover certification? To help answer these questions and others the Kashruth Council of Canada, otherwise known as “COR”, will be coming to Edmonton for a community wide event on Sunday April 3rd at the West Edmonton Mall (Conference Room 7).

COR is Canada’s largest kosher certifier, certifying approximately a thousand facilities across Canada and beyond, including some in the greater Edmonton area. But COR is also a community organization, helping Jews across the country observe the laws of kashrut. According to Richard Rabkin, COR’s Managing Director, “At COR we partner with Jewish communities across the country to try and act as a resource for all things kosher. Whether it’s answering consumer questions, kashering peoples’ homes, or advocating on behalf of kosher consumers with our elected officials.” Rabkin emphasizes that it is this feeling of communal responsibility which was the impetus behind COR’s event in Edmonton. “Canada as a whole, and the Jewish community in particular, has a tendency to be east coast centric. But we at COR feel that all Jewish communities across Canada should have equal access to kashrut resources and that is why we decided to come to Edmonton.”

Rabkin will be joining Rabbi Sholom H. Adler, COR’s Kashruth Administrator and Rabbi Dovid Rosen, COR’s Passover Specialist and a Rabbinic Coordinator. “I regularly travel across the country visiting COR certified factories and I frequently meet members of Jewish communities who have questions about kosher products,” says Rabbi Adler. “I am thrilled that we will now be having an official community event for the Edmonton Jewish community. It is well deserved.”

Rabbi Dovid Rosen, COR’s Passover Specialist answered3000 consumer questions in 2015 alone. He also conducts COR’s well attended pre-Passover lecture in Toronto each year. After last year’s lecture when he enumerated certain products that do not require specific kosher for Passover certification, one of the attendees, Mrs. Ruth Gottfried said, “This is really going to save me a lot of money and stress this year at Passover! Knowing I can buy some ‘regular’ products rather than having to get ones that are specifically marked ‘kosher for Passover’ means that I’m not going to be over-spending on regular everyday items that my family uses”.

The COR event will also teach some of the fundamental skills required to be a COR mashgiach (kosher inspector) with an emphasis on how COR mashgichim  clean and check produce to ensure that they are insect free. The presentation will include a live multimedia demonstration using Go Pro camera technology.

Finally, there will be complimentary  appetizers served. “We want Edmontonians to have an enjoyable night out which is good for the body and soul,” says Rabkin.  He adds, “After all, what is a Jewish event without food?”