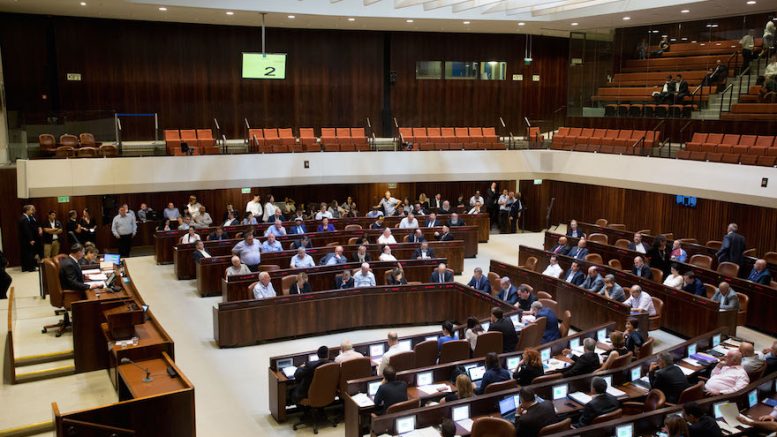 A view of the Israeli parliament in session in 2016. (Yonatan Sindel/Flash90)

By Cnaan Liphshiz and Ben Sales

(JTA) — Prime Minister Benjamin Netanyahu shelved a controversial bill that would have made the haredi Orthodox-dominated Chief Rabbinate the only body authorized by the government to perform conversions in Israel.

Netanyahu’s office announced Friday that the legislation will not be considered for six months while a “team” he will appoint comes up with recommendations for an “arrangement” on the issue. The decision comes after an outcry by the Reform and Conservative movements and American Jewish communal organizations, who felt that the bill would impugn the validity of non-Orthodox Judaism.

Netanyahu’s coalition partners agreed with his compromise, which keeps the status quo on conversions in place during the six-month delay. Netanyahu also asked Israel’s Supreme Court to put off ruling on the issue during that time. A suit pending before the court seeks government recognition for non-Orthodox conversions performed in Israel.

Non-Orthodox movements have long protested the power of the Chief Rabbinate, which holds a monopoly over marriage and divorce in Israel. A rabbinate monopoly over Jewish conversion within Israel ended last year, when a court ruling forced the state to recognize Orthodox conversions performed outside the rabbinate’s purview. The bill would have restored that monopoly, and is the latest front in a decades-long fight over conversion between the rabbinate and non-Orthodox Jews.

American Jewish leaders are also protesting the freezing of a compromise to expand a non-Orthodox prayer space at the Western Wall.

A source described by Haaretz as a “senior official” said that Netanyahu decided to call a cabinet meeting on the conversion bill after receiving harsh warnings from the heads of the American Israel Public Affairs Committee on Thursday.

The bill also outraged American Jewish officials, who have said they are weathering calls for a retaliation against Netanyahu’s government. Steve Nasatir, president of the Chicago federation, told The Times of Israel that any lawmaker who votes for the conversion bill is not welcome in his community.

On Friday, the bill’s critics welcomed Netanyahu’s decision to shelve it. The Jewish Agency for Israel, which acts as a liaison between the Israeli government and world Jewry, praised the decision, adding that it hopes the same “spirit of understanding” will extend to the Western Wall controversy. Jerry Silverman, CEO of the Jewish Federations of North America, thanked Netanyahu’s government for acceding to American Jewish concerns, and said he looked forward to reaching a compromise on conversion.

“I’m hopeful that the work that will be done will yield results,” Silverman told JTA. “I’m grateful to the prime minister for listening to our feedback from across the federations — all of our community, frankly.”

Leaders of the Reform movement also praised the decision, calling it an “important rebuke to the aggressive behavior of the ultra-Orthodox toward diaspora Jewry and the non-Orthodox streams.”

“We will continue insisting that the Haredi establishment not have a monopoly over conversion and if necessary, we will not hesitate to go back to the courtroom,” Rabbi Gilad Kariv, CEO of the Israeli Reform movement, and Rabbi Rick Jacobs, president of the Union for Reform Judaism, said in a statement.