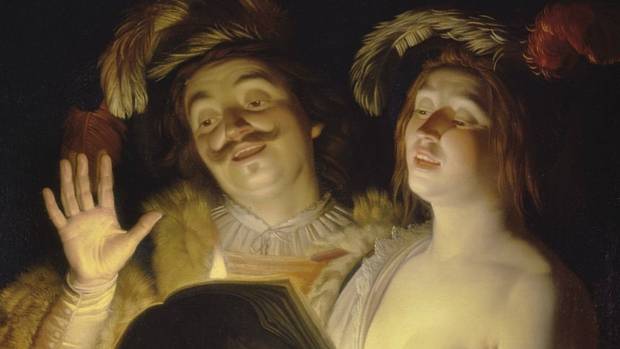 A detail l from Gerrit van Honthorst’s The Duet (1623-24). In 2013, the Montreal Museum of Fine Arts returned the painting to the heirs of Jewish art collector Bruno Spiro, from whom it had been confiscated by the Nazis. Reprinted from the Globe and Mail

If only the magnificent Chagall, Van Gogh and Picasso paintings on the walls of the Art Gallery of Ontario could talk.

The record of who owned them, and which elegant European salon displayed them, runs cold sometime in the early 1930s and then resumes after the War, often when the gallery acquired them.

Were they sold under duress by a Jewish collector, or confiscated by rapacious Nazi forces? Or is it simply that the paper trail of who treasured, bought and sold these pieces has vanished, but with no malicious intent?

The truth is, no one knows for sure.

The Art Gallery of Ontario (AGO) has 46 paintings and sculptures with what curators call “a gap in provenance,” meaning the history of ownership, in this case between 1933 and 1945, has disappeared.

Across the country, in public galleries large and small, there are similar mysteries. To date, three Canadian galleries (the Art Gallery of Hamilton, the National Art Gallery in Ottawa and the Montreal Museum of Fine Arts) have returned looted Holocaust-era paintings to heirs.

Unravelling the mystery of who owned a piece of art is “a hard slog,” says Lloyd DeWitt, the AGO’s curator of European art.

They also comb the literature for any record of who might have bought or sold the painting.

“These were vibrant, dynamic places where there were urban people, really cultured, educated urban people. There are huge amounts of traces that they left behind. The dealer records, letters to friends and the catalogues, this was the Golden Age of art history,” DeWitt says. “You have a lot of great records that were published before the war.”

Sometimes the paintings themselves bear traces of their checkered past. Both the Allies and the Nazis tended to stamp canvases as they passed through their hands.

DeWitt recalls seeing one obviously looted painting (not at the AGO) with a giant swastika painted on the back.

Josephine Mills, a past-president of the Canadian Art Museum Directors Organization (CAMDO) and the curator of the University of Lethbridge Art Gallery, recalls the story of a painting where small wooden shims had been inserted between the frame and the canvas to stabilize the painting. When a provenance researcher examined the painting more closely, she discovered the wooden pieces came from a cigar box and had Cyrillic writing. The researcher was able to identify that the painting had passed through a major collecting site for looted art on the Eastern Front.

Doing provenance research is complicated, expensive and time-consuming. Last year, the Department of Canadian Heritage gave CAMDO a $191,000 grant for six galleries to begin the research and to establish best practices in how to deal with questions about provenance.

Large galleries like the AGO had already identified the works in their collections with provenance gaps and conducted the research, but for smaller galleries, “having a work [with a provenance gap] is a scary prospect. You prefer not to deal with it – it’s such bad publicity,” Mills says. Establishing a best practices guide makes “it visible [so] that large- and medium-sized institutions can do this.”

And, as the case in Hamilton shows, even smaller galleries can own work that must be restituted.

In Lethbridge, 11 pieces with ownership gaps have been identified, but because they are not major works, it will be “incredibly difficult to do research on them,” Mills says.

While the hunt to bring the perpetrators of the Holocaust sputters to its eventual end, the quest to return the art the Nazis looted is paradoxically gaining momentum.

The AGO began looking at its collection in the late 1990s, prompted by similar work being done in the United States. Canadian galleries are signatories to international agreements with a commitment to return looted art if the claim is justified.

There is no accurate count of how many works hanging in Canada’s public galleries have these ownership gaps. A voluntary survey by 11 Canadian galleries in 2007 turned up about 800 such pieces.

Be the first to comment on "CJN: Returning Nazi-looted art in Canada"