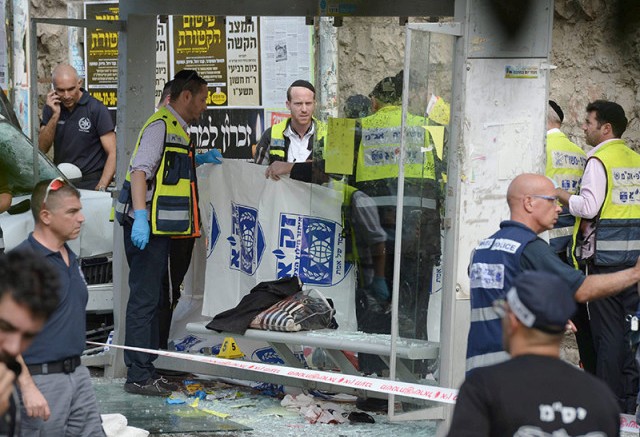 (Oct. 30, 2015 – At the time of writing, hardly a day goes by without news of another knife, car, firebomb, or gun rampage launched by Palestinian terrorists against Israelis. Extensive anti-Jewish incitement in Palestinian media, mosques, and – most graphically – social media is prompting Arab teenagers as young as thirteen to carry out suicidal atrocities against their neighbours. Their professed motive? To avenge Israel’s “desecration” of the Al Aqsa mosque that sits atop the Temple Mount, an absurd claim that seems impervious to every reassurance or rational argument – be it from Israelis or third-party observers.

In his latest failure of leadership, Palestinian Authority President Mahmoud Abbas has done his part to stoke tensions and incite popular anger in the Palestinian street. Weeks before the current outbreak of violence, Abbas proclaimed on Palestinian television: “We welcome every drop of blood spilled in Jerusalem. This is pure blood, clean blood, blood on its way to Allah. With the help of Allah, every martyr will be in heaven, and every wounded will get his reward.” One wonders how Abbas, who purports to serve the Palestinian people, can bring himself to make declarations that inevitably exact a terrible toll in Palestinian lives.

For their part, Israelis have been managing the spike in violence with considerable restraint, a fact worth reiterating in light of inadequate media coverage. Few have noticed, for example, that Israel has not closed the West Bank or denied access to Israel for the 70,000 Palestinians who have permits to work in the Jewish state. This signifies an extraordinary effort to reduce tensions and minimize damage to the Palestinian economy, even in the face of daily threats to the people of Israel.

William Faulkner once said that “the past is never dead. It’s not even past.” For anyone with a sense of Jewish history, these events cannot help but remind us of episodes of mindless blood libels and fervent violence against Jews throughout the centuries. Sadly, this history is within living memory for many in our community.

In November, CIJA is partnering with Jewish communities across Canada to highlight and commemorate the plight of 856,000 Jewish refugees who fled large parts of the Middle East and North Africa after Israel’s establishment. In some cases, long-established communities were obliterated virtually overnight, as happened to Iraqi Jewry which, having existed for 2,500 years, was the oldest in the Diaspora. Arab animosity in response to Zionism was ceaseless, emerging in the form of local intimidation, state persecution, and violent pogroms. Like any survivor of trauma, the experiences of these refugees had a unique and lasting impact on their identity, and ultimately that of their children and grandchildren.

Recalling the suffering of Sephardi/Mizrachi refugees is more than an act of commemoration; it reflects a larger need to ensure truth and accuracy in Canadian policy. For many years, Canada’s Middle East policy ignored the experience of Jewish refugees from across the region, despite giving prominence to the plight of Palestinian refugees. In an effort to rectify this massive imbalance, CIJA worked with Canadian parliamentarians to secure formal, all-party recognition of the experience of these refugees, which was approved by cabinet in March of 2014. Today, as a result of these efforts, Canada is the only country aside from Israel to have acknowledged this history at the cabinet-level, marking a formal change to Canadian policy that remains in place to guide future governments.

If you are interested in hosting an event to remember the experience of Jewish refugees from the Middle East and North Africa, please contact Judy Zelikovitz at jzelikovitz@cija.ca.

Just as we must honour Jewish refugees and victims of pogroms past, we cannot remain silent in the face of Palestinian terrorism today. I encourage you to visit www.cija.ca/takeactionisrael/ to join us in taking action to support Israelis at this difficult time. In particular, if you volunteered or supported a federal candidate who was successful in the recent election, I encourage you to reach out to them today. Let them know about the situation in Israel, the terrible reality of Palestinian incitement and terrorism, and – of vital importance – the ceaseless desire of Israelis for peace.

Steve McDonald is Deputy Director, Communications and Public Affairs, at the Centre for Israel and Jewish Affairs (CIJA) – the advocacy agent of Canada’s Jewish Federations