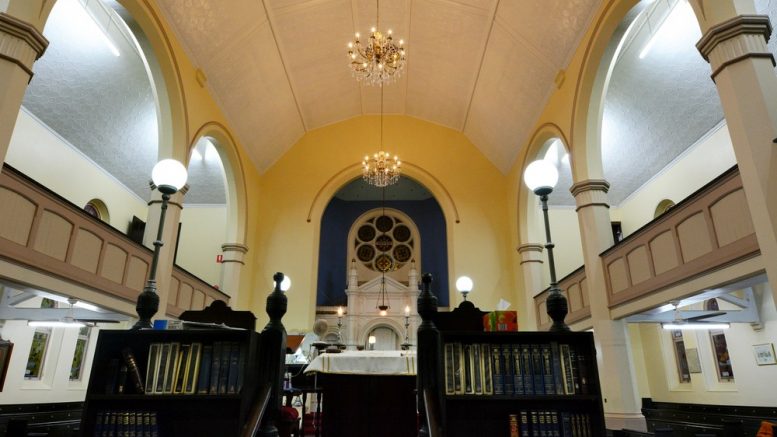 (Kveller via JTA) — It started off as a pretty typical day. I had an appointment downtown in the morning and lunch scheduled afterward with a friend. I had been looking forward to seeing her — several weeks of summer had passed since our last meet-up. We talked about motherhood, other friends who were expecting, parenting with our partners. It was a nice catch-up, and I left in a good mood.

But the day later went sour with the news of the weekend’s white nationalist/neo-Nazi/white supremacist rally in Charlottesville, Virginia. My first reaction to the rally was general disgust, followed by anger, sadness and eventual numbness. It’s not like I’m really surprised by displays of neo-Nazism or white supremacy because these “demonstrations” — more like intimidations — have been occurring across the world and (luckily, less rarely) where I live throughout my life.

But on this day, like many of us, I felt particularly vulnerable, I felt unsafe. I felt alone.

Suddenly and quietly, Hillel’s words came to mind: “If I am not for myself, who will be for me? And if I am only for myself, what am I? And if not now, when?”

Trying to answer these immortal questions these past years, as a grieving mom and a new mom, has been difficult.

It seems to be a common complaint among mothers that the birth of a baby completely transforms the mother’s life into something previously unrecognizable. What is articulated less — perhaps due to fear of being judged — is that the woman all of a sudden has no time to herself. This isn’t a secret, but guilt is pervasive: admitting to wanting that space away from baby feels like some kind of grave sin.

When my second child was born, I wanted to breastfeed him as long as I could, and I did, even though I should have quit earlier for my mental health. I was drowning in grief from the loss of our first baby and the anxiety of keeping my next baby alive. Continuing to nurse removed the possibility of extended time away. I was dead-set on doing what I thought was right, even though it meant my depressive fog lingered.

Finally, after 17 months and the slowest possible weaning period, I was done. I regained the ability to leave the house for multiple hours at a time. I was free, and I had time to clear my head. I decided not to feel guilty about the fact that it felt good, and I was going to take advantage of having just been liberated to treat myself to music, books, wine, conversation and also silence. If I am not for myself, who will be for me?

Up until this point, I would have never called myself a “good” Jew. After my bat mitzvah, I basically abandoned ship in favor of more selfish teenage pursuits. Later, I neglected to continue my Jewish education because it didn’t feel cool, and I needed to differentiate myself. I went to youth groups with Christian friends.

I ended up at a private boarding school that was heavy on Catholic rhetoric, among other things. I started college life at a Southern Baptist university in the South, and instead of aligning myself with other Jewish kids (of which there were few to begin with), I just wanted to make good friends.

In my 20s, I began to hang around my family’s congregation. I attended Shabbat services a handful of times with my dad. I volunteered to sing in the High Holiday choir, and even met with the rabbi to discuss Judaism and spirituality.

I fell in love with a Jewish man who had one Jewish parent, and when we decided to get married, it only seemed right that we do it under a huppah with the rabbi. When my husband and I lost our first child, the rabbi and other members of the congregation showed up for us in a way that no one else in our lives could.

But we didn’t join the synagogue. Somehow it didn’t feel necessary at the time. We desired isolation in our grief. We knew that a community was there for us when we needed it, if we felt like participating at some point. When our next child was born healthy, I was unsure whether I wanted to affix myself — and him — to a set of traditions I didn’t know if I’d carry out.

There were other times when I wondered if my Jewishness was a burden to myself, to my own enlightenment or happiness. Also, I didn’t want to be part of a community that I wasn’t sure would accept me back into it. If I am only for myself, what am I?

After Charlottesville, though, I don’t want to feel alone. I don’t want to mourn in isolation. I have a community — a network of intelligent, kind, thoughtful people — but I need a Jewish community, too. Now is a scary time — one I never thought would rise up from history and insert itself into present day, as it has. I want to raise my son with people of all backgrounds and beliefs, but allow him to feel rooted in his family’s traditions. I want to raise him so that he knows love in his heart.

Most of all, I want to belong to a group of people who know this struggle. I want to be a member of a group that provides alliance to other targeted minority groups and advocates for peace. I want to find strength with people who are not afraid to stand up for themselves and stand up for justice. So I hope to find a Jewish home for my family soon.

If not now, when?

(Katie Colt is a freelance writer, musician and mom. In her free time, she is the outreach coordinator for Volunteer Immigrant Defense Advocates. She lives in Chicago with her husband, Jack, and son, James. You can follow her on Twitter @katiebabyhorse and Instagram @katiebabyhorse.)
Kveller is a thriving community of women and parents who convene online to share, celebrate and commiserate their experiences of raising kids through a Jewish lens. Visit Kveller.com.

Be the first to comment on "After Charlottesville, I’m Finally Joining a Synagogue"