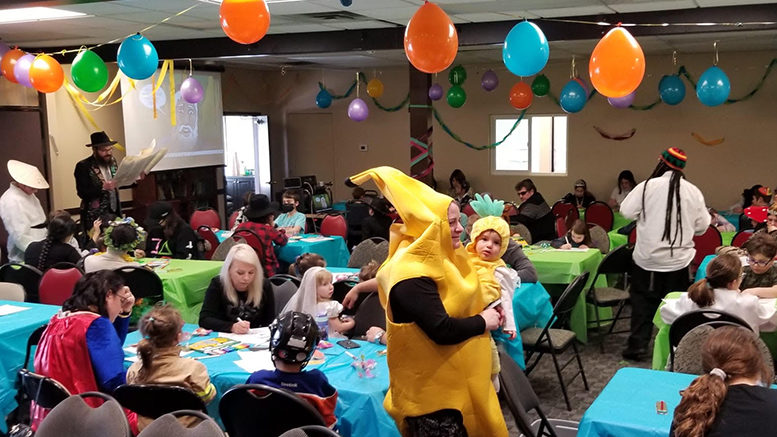 Chabad Edmonton held two Purim parties on March 17 - one for adults and one for families / kids. Both were well attended and a lot of fun.

(AJNews) – Like so many people in the Edmonton Jewish community, the last two years of turbulent COVID adaptation have challenged me to maintain a sense of community connection despite the obvious barriers. Each year our oldest son, Benji, looks forward to the Chabad Purim celebration. He plans out his costume meticulously, coordinates with his friends, and shakes his grogger with such enthusiasm that he nearly takes flight! In 2020, mere days before the first lockdown, we were able to take our then, two-month-old Jacob, to his very first Chabad Purim party – proudly dressed in the same bat costume Benji once wore.

The lockdown resulted in some creative innovations in youth programming at Chabad Lubavitch of Edmonton. As a parent, I can attest that moving to a socially-distanced virtual format for youth engagement actually enhanced the focus on individualized learning – a huge plus! Despite these fantastic efforts to adapt to ever changing regulations, the lack of the ability to celebrate Purim as a wider united community was profoundly felt in our household.

That is why when Chabad announced that the annual Purim festivities would kick back into action for 2022 the news was met with immense enthusiasm throughout the community! Once again children began to ready themselves for the occasion, but this year there was yet one more creative innovation. With many people still a bit wary of venturing out, let alone for larger social gatherings, it was decided that this year children’s activities, and the always much anticipated Chabad Edmonton Purim banquet, would be held separately. But how would this work?

At first Benji was wary of this arrangement, and we all found ourselves longing for things to be as they always had been. These desires dissipated instantaneously once we arrived at the Chabad Edmonton children’s Purim party! With my three kiddos, aged 11, 2, and four-months, in tow, my good friend Ruti and her adult daughter along as backup, we arrived at the Chabad House to a flurry of dazzling taffeta, brightly colored polyester, and even elaborate cosplay anime costumes. Little toddlers, like our Jacob, dressed in fuzzy felt and flannel animal costumes, composed a diverse menagerie of cuddly creatures.

The walls were adorned with sparkling streamers, and each table was equipped with crafts and Purim-themed word-searches. Adults, who watched each other’s kids grow up through Facebook posts, greeted one another with overwhelming joy, after years of conversing electronically. This was the epitome of a community reunited!

The children were regaled by the endearing ventriloquism of ‘The Joe Show.’ The spectacle was so endearing that toddlers sat transfixed, and older kids laughed along with hearty jubilation. Many children whose early years were under the oppressive shadow of COVID, like our Jacob, had never seen anything so mesmerizing. Parents and grandparents marveled on, overjoyed at the unrestrained happiness of the little ones.

Rabbi Mendy Blachman facilitated the mitzvah of hearing the Megillah read aloud, and children and adults exploded with a chorus of chatoitic cacophonous groggers and yelps. Rebbetzin Devorah Pinson, surrounded by gaggles of bouncing costumed kiddos coordinated a raffle for much coveted Galaxyland Tickets. And of course, what Purim would be complete without Rabbi Dovid Pinson igniting the energy of the crowd!

The mitzvah of exchanging mishloah manot was fulfilled as bags of kosher goodies changed hand and were quickly opened by eager children. The punctuated plunk of coins clinked in tzedakah jars, and once again the spirit of the Edmonton Jewish community could be felt in our sharing of Purim’s mitzvot.

This year it was our newborn daughter Tamara’s turn to follow in her brothers’ footsteps and wear the tiny bat costume for her first Purim. We were overjoyed that we could create these warm memories for our children after so long kept physically distanced from the community.  Certainly, we all long for the return of large Chabad Purim festivities at the Fantastland Hotel, complete with elegant fine-dining and bouncy castles. But even when, G-d willing, this is all possible again, if there is a separate children’s celebration offered, the Lipes children will be there without fail.