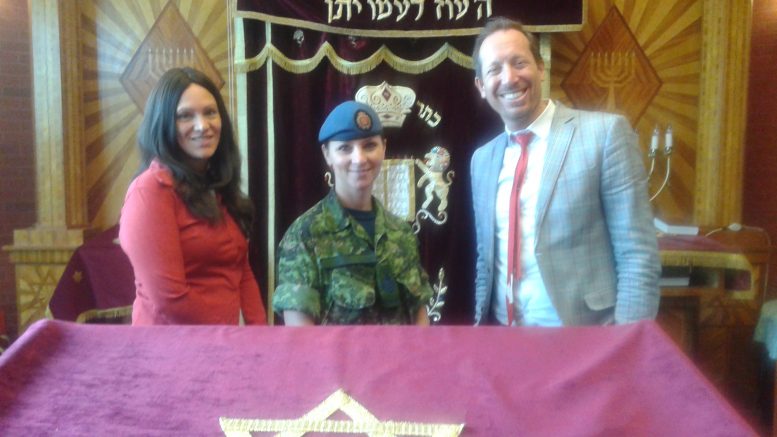 Sgt. Natasha Card of the Canadian Armed Forces will be delivering a special keynote address at the Canada 150 community celebration. She is pictured above with Beth Israel's Rabbanit Batya and Rabbi Daniel Friedman.

(EJNews) – Beth Israel Congregation will be hosting a very special community wide Canada Day Celebration on July 1 with a huge 150th anniversary event. Because July 1 falls on Shabbat, the celebration will kick off with a special Canada Day service that will begin at 11 am following the Shabbat Service.

Rabbanit Batya Friedman will deliver a dvar that will focus on Canada’s 150th birthday. There will also be greetings from MP Kelly McCauley and MLA Lorne Dach and a keynote address from Sgt. Natasha Card of the Canadian Armed Forces.

The service will be followed by a delicious Kiddush with a uniquely Canadian themed menu – including French toast and so much more.

A special feature of the celebration will be an exhibit marking the contributions of Jews to Canada and celebrating the 150th anniversary of Confederation.  The Canadian Jewish Experience: A Tribute to Canada 150 is a national exhibit composed of specially created panels illustrating nine major themes, including Jewish contributions in war and diplomacy, public service, human rights, economic growth, arts, culture and sports. It will have its Edmonton premier at Beth Israel from July 1-5, then move to Beth Shalom from July 6-22. The exhibit will be on display at Talmud Torah School for the month of September and then on to City Hall for the month of October.

Rabbi Friedman will be in Ottawa for Canada Day.  He is presenting at the Faith in Canada 150 Millennial Summit and then attending the sesquicentennial gala (until Shabbos arrives). He will then be the Canada Day scholar-in-residence at the Ohev Yisroel shul in downtown Ottawa where in addition to leading the service, he will deliver the identical dvar as Rabbanit Batya is delivering here in Edmonton.