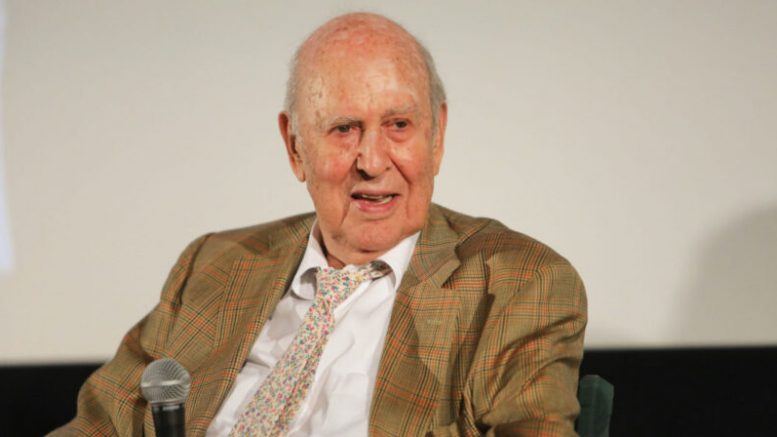 (JTA) — Until the last day of his life, Carl Reiner was tweeting about some of his favorite topics: politics, comedy and the twists and turns he experienced over decades as one of the world’s greatest living funnymen.

Reiner died Monday at 98, hours after reiterating his dismay that Donald Trump had become president, days after posing with his daughter Annie and longtime friend Mel Brooks in Black Lives Matter shirts and 70 years after his first television appearance.

The Bronx native, the son of Jewish immigrant parents, called himself a “Jewish atheist” and said his faith in God had ended with the Holocaust.

After serving in the U.S. Army during World War II, Reiner began a long and varied show business career.

In the infancy of television, he was a performer and writer on “Your Show of Shows” and “Caesar’s Hour.” In the 1960s he created “The Dick Van Dyke Show,” which won numerous Emmy Awards, including for himself as a writer. Along the way he formed a comedy duo with Brooks that was highlighted in their album the “2000 Year Old Man.” Reiner wrote screenplays for Steve Martin films including “The Jerk” and, in his later years, voiced characters in animated films.

In a 2015 documentary about longevity that Reiner hosted, he offered his own secrets for long life.

“The key to longevity,” he said, “is to interact with other people.”

Reiner and Brooks remained close friends into their 90s, often eating dinner together, as an episode of Jerry Seinfeld’s “Comedians in Cars Getting Coffee” showed.

In the documentary, Reiner also offered insight into what made him funny.

“I think it’s partly your genes,” he said. “Also, it’s your environment. Also, if you have a funny bone; if you grew up in a family with a sense of humor.”

Reiner’s son Rob also would go on to have a distinguished career as an actor, notably in the groundbreaking TV comedy “All in the Family,” and as a director of such films as “When Harry Met Sally” and “A Few Good Men.”

Reiner’s wife of 64 years, Estelle, died in 2008. Along with Rob and Annie, he is survived by a son Lucas, their children and their children’s children.

Be the first to comment on "Carl Reiner, comedy legend and consummate old Jew telling jokes, dies at 98"