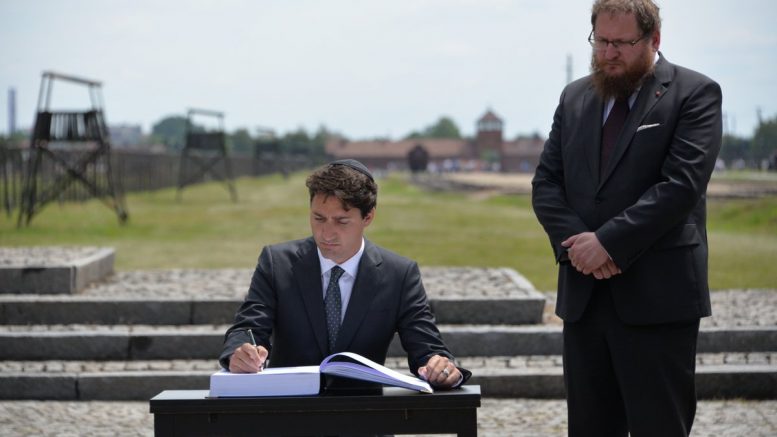 Prime Minister Justin Trudeau was visibly moved during his tour of the Auschwitz concentration camp, writing "Tolerance is never sufficient; humanity must learn to love our differences."

Among those joining Trudeau on his tour Sunday July 10, 2016 of the former Nazi death camp was Nate Leipciger, a former prisoner there who immigrated to Canada from his native Poland in 1948 at the age of 18. Among others in the delegation were the Canadian minister of foreign affairs, Stéphane Dion, and Rabbi Adam Scheier of Montreal, vice president of the Council of Rabbis of Canada. Auschwitz Museum Director Piotr Cywinski welcomed the group. 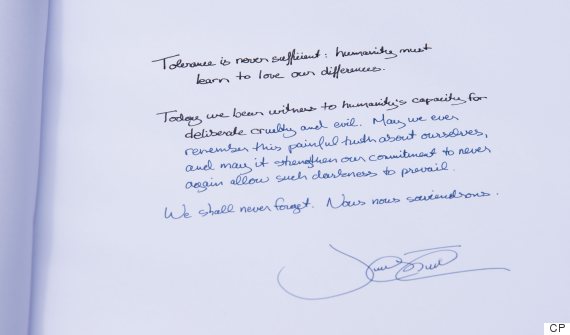 Trudeau reportedly made a point of visiting the Auschwitz memorial following the NATO summit in Warsaw.

Members of the delegation visited much of the museum exhibition, including one block showing photographs documenting the arrival of a transport of Jews from Hungary. They also saw the room devoted to sorted looted property — shoes, bags, glasses and brushes — that in the camp jargon was called “Canada,” and visited the building of the first gas chamber and crematorium at Auschwitz I.

In the second part of the visit, Trudeau and his group visited the former Auschwitz II-Birkenau and walked along the railway ramp where the Germans carried out the selection of the Jews. They also saw the ruins of the gas chamber and crematorium III, where the delegation said Kaddish, the Jewish prayer for the dead.

“Today we saw the possibilities of deliberate human cruelty and evil. Let us remember always this painful truth about ourselves,” Trudeau wrote in the guest book of the museum. “Tolerance is never sufficient. Humanity must learn to love its diversity.”

Canada is among the 36 countries that supported the Perpetual Fund of Auschwitz-Birkenau Foundation, which finances the maintenance of authentic remains of the concentration camp.