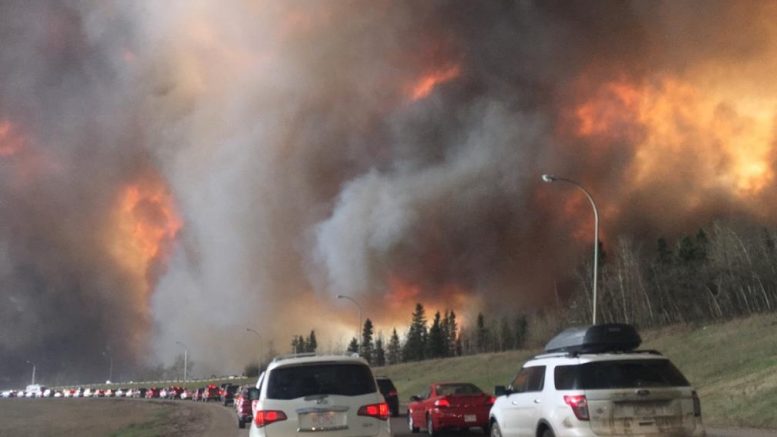 Landscape view of the wildfire that ripped through Fort McMurray in May destroying 2400 homes and forcing the largest wildfire evacuation in Alberta history.

(July 4, 2016) – The Canadian Jewish community contributed over half a million dollars through the organized Federation system in support of victims of the recent Fort McMurray wildfires.

On July 14, 2016 Jewish Federations of Canada – UIA (JFC-UIA) announced that $500,000 was contributed by the Canadian Jewish community through the organized Federation system for victims of the recent Fort McMurray wildfires. Money was raised through individual donations, Federation and foundation allocations and leveraging the matching of funds through the Canadian Red Cross.

“We are thrilled with the response of the Canadian Jewish Community to the crisis in Fort McMurray,” stated Debby Shoctor, CEO, The Jewish Federation of Edmonton.

“The support of our own Jewish Communities in Edmonton and Calgary has been great, but it is very heartwarming that we, as a Canadian Jewish Community, contributed half a million dollars to help the people of Fort McMurray even though there is very little Jewish presence there. We have also received donations from as far away as Texas, New York and Philadelphia and it has been quite overwhelming for us.”

“The generosity of Canadians in response to the Fort Mac fires was awe-inspiring – and the generosity of Jewish Canadians was no exception,” added Adam Silver, CEO, Calgary Jewish Federation. “We are always overwhelmed by the way Canadians respond to emergencies and reach out to their fellow citizens of the world both financially and emotionally. We live in a generous, warm, principled country – and we are forever grateful for that – in times of emergency and every day.”

On May 1, 2016, the wildfire began southwest of Fort McMurray, Alberta. On May 3, it swept through the community, destroying approximately 2,400 homes and buildings and forcing the largest wildfire evacuation in Albertan history. It continued to spread across northern Alberta and into Saskatchewan, consuming forested areas. The fire spread across approximately 590,000 hectares (1,500,000 acres) before it was declared to be under control on July 5, 2016. It is the costliest disaster in Canadian history.

“The national response to the Alberta Fire Relief Fund brings to life the Jewish value of Tikkun Olam on which the Federation system is based,” concluded Julia Berger Reitman, Chair, Jewish Federations of Canada – UI.

“It is indicative of the unified nature of the Canadian Jewish community. In times of crisis, we come together in spirit and in action. As Chair of JFC-UIA, I am proud to represent a population that rises to the occasion so generously in response to the needs of fellow Canadians requiring emergency relief.”