(AJNews) – In February of 2016 when Jacquie Seipp sat Shiva for her mother, she found herself contemplating what it is to remember past generations. “For a decade or more, every Yom Kippur at synagogue, the story of 93 young women, girls really, victims of the Shoah, had been recounted during services. Their final wish was to be remembered by someone: ‘All we ask is, say Kaddish for us, for all 93, say Kaddish.’ I was there with family and friends remembering my mother, and the idea just came to me.” Seipp remembers that once the initial vision for One More Candle escaped her lips, its materialization took on a life of its own: “It was like a football – everyone was throwing around ideas and adding to it.” 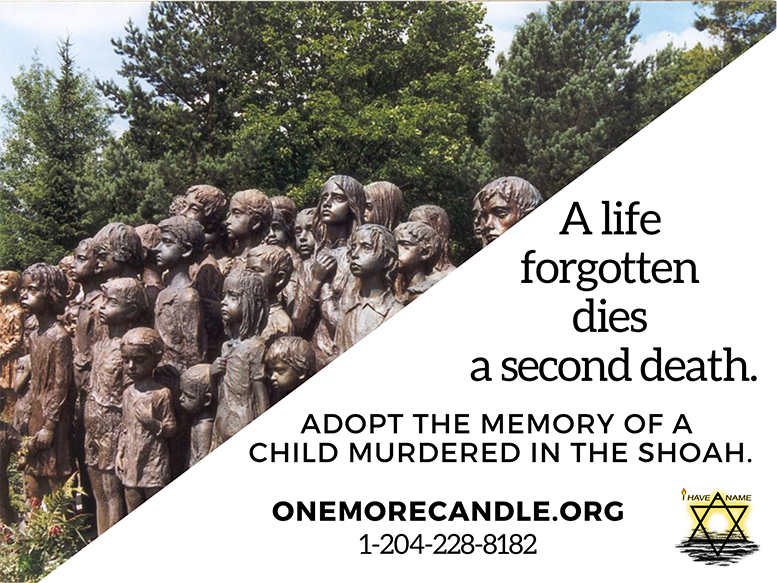 “Lighting a candle in honour of those who have passed is a tradition to express what we cannot communicate with words. With each candle, the life of a child who lived, and was murdered, is remembered and honoured.” Within just 5 months and 3 days of submitting their application, One More Candle was approved for non-profit status, and a movement was born. The project seeks to match the names of children who perished during the Holocaust with individuals, families, and communities that can continue to remember them.

“Each child represents all the generations that came before them,” explained Seipp in a recent phone interview. The Winnipeg-based organization is small, but vibrant. The bulk of the administrative work is still completed from Seipp’s own home by her husband Todd Boyer. The face of the initiative, and the driving force, is Seipp herself. “We have a wonderful volunteer who does all our web-design. She’s finishing her PhD in Christian theology, and is so dedicated to our mission.”

To date, One More Candle has matched approximately 6,000 child Holocaust victims with Synagogues and individuals who have committed themselves to preserving their memories.  “We’re asking for a lifetime commitment here,” continued Seipp.

“By adopting one of our children, you are inviting their memory into your life. That child’s memory will sit at your Pesach table, and your children will remember them, and then they will teach their own children to remember them too – l’dor v’dor – from generation to generation.”

With the help of Yad Vashem’s sizeable database of over 1.5 million names of child Holocaust victims, Seipp knows that there is a lot of work ahead of her, but hers is a labour of love. “So much of this has been b’shert. We are the ones doing the leg-work, but Hashem’s hand has made certain that everything comes together as it must.”

According to Sharon Chisvin of the Winnipeg Free Press: “Since One More Candle was founded, thousands of children have been adopted by families, schools and synagogues across Canada and the United States, and by people from as far away as Australia, Venezuela, Ireland and South Korea. Many individual Winnipeggers and local groups also have adopted names, including Faith Temple.”  Seipp’s own synagogue, Shaarey Zedek, of which her grandfather was a founding member, adopted one child for every day of the Jewish calendar year as have many other synagogues in North America. “The JCC in Kelowna has memorialized their adopted child with a plaque. Their younger generations will grow up seeing that plaque, and that child’s name will always be a part of their lives.” On a trip to the Kotel nearly 2 years ago, Seipp and her daughters met a fellow North American from Philadelphia. “Just a few weeks after we got home, I got a phone call from that same lady’s synagogue wanting to adopt.”  Seipp believes that so much of promoting awareness of the project is dependant on word-of-mouth. “At each step, Hashem has opened doors for us,” said Seipp.

“When we remember just one child, we are also remembering our 6 million lost.”

The 93 victims, whose stories had been told at Shaarey Zedek each Yom Kippur, asked that Kaddish be said for them. When asked about the Halakha of One More Candle’s work, Seipp explained without hesitation: “These children are our family.” She emphasized: “We are a family of Jews throughout all generations. The mitzvah of memory is why we are still here.” Seipp has consulted with rabbis regarding Halakhic observance, and One More Candle, as it is committed to remembering, is focused not only on ritual, but above all on making sure that each child is not forgotten. “If the child’s name is lost, then they die a second death – we cannot have that” added Seipp with conviction. While some who adopt the memory of a victim include the child’s name on their list of Yahrzeits, some who have adopted from outside the Jewish community pay their respects in other ways. To this end, One More Candle has partnered with Bridges for Peace, an Evangelical group committed to promoting Jewish causes.

“When it comes to One More Candle, I have more moxie than with anything else in my life.”  Seipp remembers introducing herself to the head of the Canadian branch of Yad Vashem with her idea five years ago, “and look where we are now!” One More Candle is proudly partnered with B’nai Brith Canada, and their network continues to grow.  “From those who generously adopt our children, we ask nothing other than their commitment and dedication to that child’s memory – there is no money involved, and people are often surprised by that.”

“A single candle is a symbol of the human spirit and brings light to darkness,” said Seipp in closing.