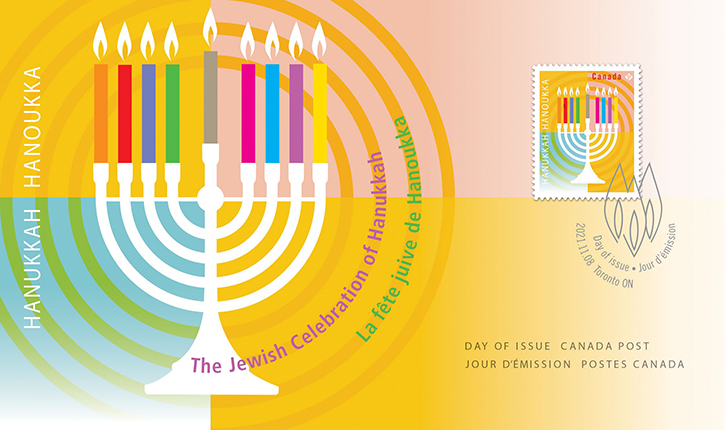 (November 8) – Canada Post has issued a luminous new stamp to mark Hanukkah, also known as the Festival of Lights – a celebration of hope, resilience and faith in brighter days to come. 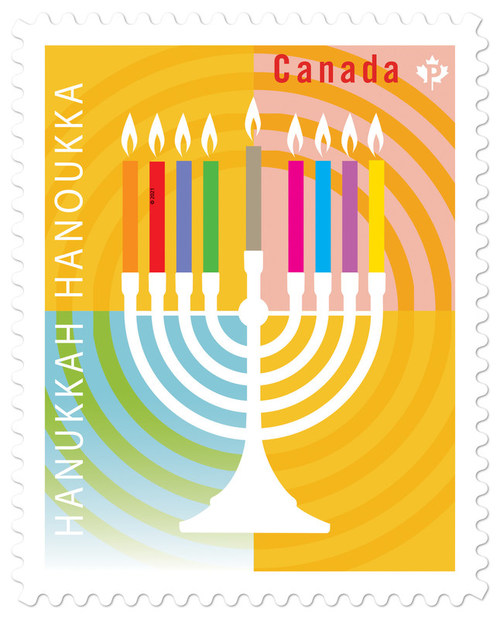 Hanukkah is observed by Jewish communities in Canada and around the world. This year, the eight-day festival takes place from nightfall November 28 to nightfall December 6. The stamp is available in advance so Canadians can use it to send holiday greetings.

Hanukkah commemorates the rededication of the Temple in Jerusalem (Judaism’s holiest site) around 165 BCE, when the Jewish people reclaimed it from their oppressors after the victory of the Maccabees. According to Jewish tradition, the Temple’s menorah was to burn continuously; miraculously, it lasted for eight days on only one day’s worth of oil.

Each evening for eight days, celebrants commemorate this miracle by lighting an additional candle in a Hanukkah menorah, a special eight-branched candelabra called a hanukkiyah. A symbol of hope and faith, the candelabra is often placed in a window to share its light with the world. Other traditions associated with the celebration include prayers, songs, religious readings, the game of dreidel and gift-giving.

About the stamp issue

This single-stamp issue, designed by Joseph Gault and Avi Dunkelman, features an image of a hanukkiyah with candles in a variety of bright colours. The stamp image symbolizes Hanukkah’s timeless message of hope for the future. The Permanent™ domestic rate stamp is available in a booklet of 10 stamps and affixed to an Official First Day Cover, which features an enlargement of the hanukkiyah shown on the stamp.

The Hanukkah stamp and collectibles are available at canadapost.ca and post offices across Canada starting today.